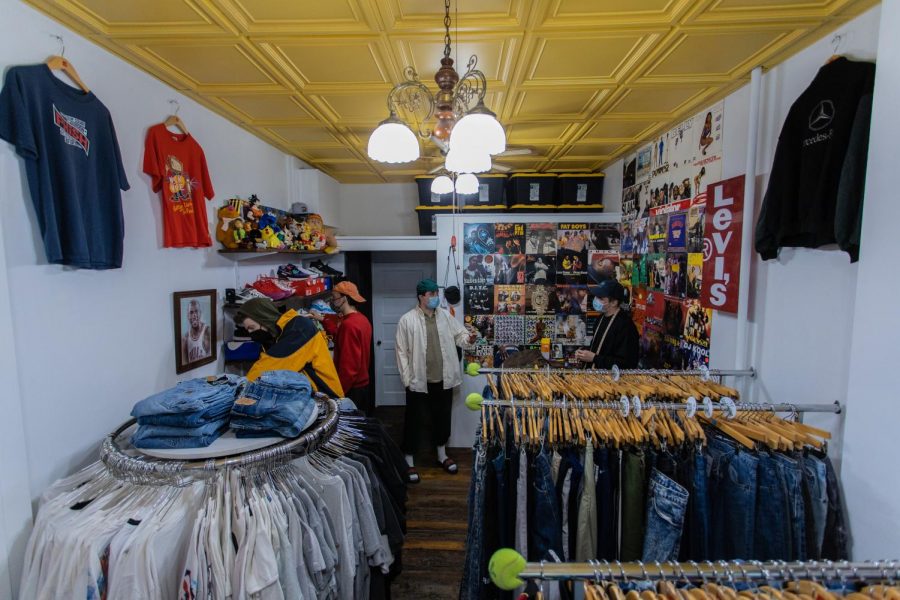 “I got vintage Levi’s, vintage Carhart’s, windbreakers, Nike, Adidas, satin jackets, sweatshirts, fleeces,” Cyr said. “I just put out the summer stuff: shorts, tank tops, jerseys and crop tops, we have t-shirts and button ups, I have a lot of jackets, sneakers, hats and some accessories.”

Cyr carries many types of clothes, but he is selective with what specific items fill the racks. His friend, self-proclaimed sole member of the Cndypnt skate team and senior Christian Cantrell helps Cyr pick the clothes.

Cantrell described the Cndypnt look as “90s grunge, skater-boy chic,” with emphasis on the skater aspect. That being said, the store attracts more than just skaters, he said.

Cyr recognizes that without the college students in Burlington, Cndypnt wouldn’t be viable, he said. He was impressed by the reception the store received from the community and wanted to turn Cndypnt into more than a point of sale.

“What I really want to foster is a community space for people who are really passionate about clothing and vintage t-shirts, hip hop, shit like that,” Cyr said.

Cyr, a UVM student for a semester in 2016, has been part of the vintage clothing scene for a few years.

Cantrell said that Cyr opening the storefront was a leap of faith. This leap of faith seems to have paid off as Cyr said he is satisfied with the clientele the store has received.

Both Cyr and Cantrell see Cndypnt growing beyond the small store it currently occupies, but at its own pace. They both see Cndypnt as a gathering space.

“I love Avery’s vision and ambition to put on shows, to do events, to have people drawn in and build more of a community, I think that’s amazing,” Cantrell said.

Both Cyr and Cantrell pick clothes for Cndypnt. They often source clothes from thrift stores, flea markets, and more unusual places such as other people’s homes. Cyr said one location they frequented last summer as especially intriguing: a three-story Victorian mansion filled floor to ceiling with various vintage paraphernalia.

Cantrell described the process of picking clothes as what adds value to vintage clothes.

“Say you go into a thrift store, 95% of the things in there are just shit, but there’s that 5% where the stuffs really cool, and there’s a margin there,” Cantrell said.

Beyond hip-hop, Cyr said he draws inspiration from Round Two, a vintage clothing store in Richmond, Virginia that regularly posts videos on YouTube. However, Cyr and Cantrell don’t think there are similar stores in Burlington.