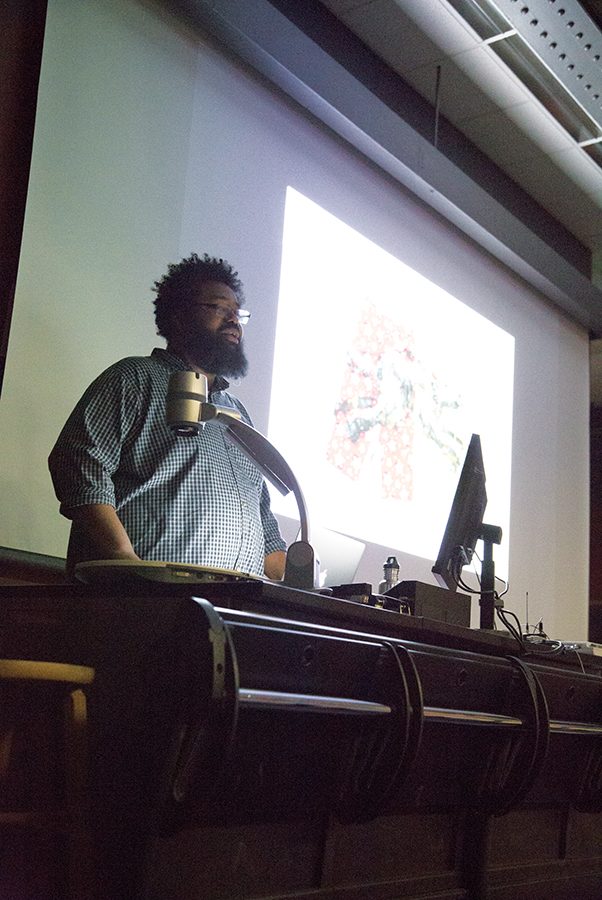 Mike Cloud, an assistant professor at Brooklyn College and internationally recognized artist, gives a presentation on his work as part of the Mollie Ruprecht Fund for Visual Arts March 21. When speaking about his process Cloud said, “I work on them until I don’t have ideas that would make them better, and then I stop.”

On the blackboard is the image of an wooden arrow suspended from a wall, a mixture of oranges, greens, yellows and blues painted in the sections.

Each piece of wood contains tick marks and the name of someone who was hanged, written in small print.

Abstract painter Mike Cloud gave a presentation on his work as part of the Mollie Ruprecht Fund for Visual Arts March 21. The fund brings artists and critics to the University to showcase their pieces, according to the UVM art department website.

Currently an assistant professor at Brooklyn College, Cloud is an internationally recognized artist who has lectured at colleges across the country, including Yale University, Rutgers University in New Jersey and Bard College in New York, said associate art professor Steve Budington, in an introduction to the talk.

Cloud’s paintings are also featured in several prominent collections, including a book he often uses with his students, Budington said.

The talk focused on the role of abstraction in art.

One of the misconceptions many people have about abstract art, Cloud said, is the assumption that it can’t be interpreted. Even many of his graduate students believe this.

“I feel like a paleontology professor, and my students are asking me why we have to dig up bones,” he said.

He finds that despite its difficult nature, abstract art shares many of the same features as non-abstract art.

Cloud pointed out that a common way of getting feeling into a painting is emphasizing familiar images. The method he prefers, however, is just as focused on the process of making art itself.

The work that goes into creating art “automatically puts emotional energy into the piece,” Cloud said.

“I’ve listened to abstract music that wasn’t about a subject and have been brought to tears,” he said.

Many of Cloud’s works explore the intersection between these emotional reactions and social themes, such as history and identity, Cloud said.

To show this, he displayed a large work consisting of two Stars of David, each painted in shades that were inspired by femininity, queerness and the color-code system used in concentration camps.

The reactions to that work have ranged from offended to thrilled, with many interpretations exploring the relationship between minorities and visibility in society, Cloud said.

Among his other works shown were pieces that explored the relationship between patriotism, American industrialism and rape culture in the northern U.S., and one that examined the treatment of women in art history.

Cloud tries not to limit himself too strongly to one single theme or message throughout his work, he said.

Many of the works of his displayed in the Francis Coburn gallery, located in Williams Hall,  are brought together through a similar approach.

“They’re basically sketches,” he said, noting that the original show in Los Angeles was titled “Small Unfinished Works” before coming to UVM.

“I work on them until I don’t have ideas that would make them better, and then I stop,” Cloud said. “I don’t concern myself with an idea of completion.”

Senior Natalie Kampf attended the lecture after hearing about it from a professor.

For Kampf, Cloud’s work helped give her a new perspective on the relationship between art and audience, particularly “how [we] interact with sculptures and paintings,” she said.

Mike Cloud’s work will be on exhibit in the Francis Colburn gallery until March 30.