Senior documents cause to get rid of fighter jets in Burlington 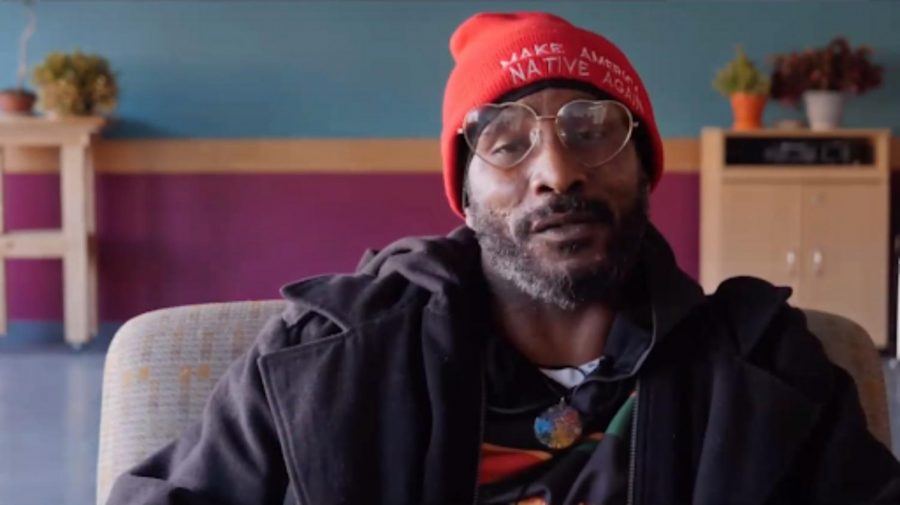 A screenshot from senior Ruby Bates’ short film about the basing of F-35’s in Burlington. Rajnii Eddins was one of the interviewees in Bates’ film.

A group of concerned community members are protesting the use of fighter jets in Vermont. A UVM senior sought to document their cause in a two part film.

Burlington area community members tuned into Zoom April 18 for a virtual viewing of senior Ruby Bates’ short film about the basing of F-35’s in Burlington. Vermonters fighting to get the jets out were in attendance.

“After talking to people involved, I realized how unfair this issue was,” Bates said. “I then recognized how much a video would help push forward the movement and gather people together to ban the airplanes.”

There are currently five of the F-35 fighter jets based at the Burlington Airport under the Vermont Air Guard. It is planned that by the end of summer 2020, there will be a total of 20 of these jets based there according to a December 2019 Burlington Free Press article.

The films and discussions were a part of a long lasting movement in the Burlington area against the jets. Bates, a Film and Television Studies student at UVM, was approached in September by a local activism group called People for Peace and Security to help.

“I was excited to use my skills outside of school and do something that had a very political solution to it rather than just highlighting events,” Bates said. “It was also attempting to galvanize people to act.”.

The F-35s have been opposed by members of the Burlington community for eight years.

Complaints have been centered around the plane’s disproportionate disturbance on marginalized communities, their capacity for nuclear warfare, impacts on the climate and natural environment, crash risk, human disturbance and overall cost.

Though testing may be necessary for the operation of the jets, it should take place elsewhere Bates said.

“It is not right that these war planes are being tested over civilian areas,” Bates said. “They should be tested in the desert or other areas where civilian life will not be disturbed.”

Jennifer Decker, founding member of People for Peace and Security and former member of Citizens Against Nuclear Bombers in Vermont, is at the forefront of movement.

“I am opposed to them on every level,” Decker said. “They are damaging to our bodies, our hearing and children’s development. Kids at Champlain Elementary School in South Burlington have their learning disrupted when the planes take off and they will develop attention issues.”

The issue of cost among the F-35 opposition, in addition to the noise abatement, is closely linked to the amount of taxpayer money going towards the heavily militarized plane. Decker said she disapproves of the high level of military funding from the federal government.

“There are human needs that we see in this country that could be solved if we would fund things such as healthcare, education, housing and jobs,” Decker said.

The price tag of a single F-35 jet ranges from $94 and $122 million. With maintenance, fuel, labor and other additional costs, the cost of its expected 55 year lifespan equates to about $1.5 trillion. For just one hour of air time, $44,000 is spent, according to August, 2018 Aviation Today article.

For Rajnii Eddins, local activist and poet, his opposition to the F-35’s centers around his anti-war stance. Eddins was one of the interviewees in Bate’s film and offered a worldly perspective to the cause.

“I’ve always been anti-war. Not really seeing it as a wise way to conduct our affairs or diplomacy as human beings,” Eddins said. “When I saw that folks were protesting the jets, I was invited to come and share some of my poetry to inspire and affirm people in the movement.”

His opinions  about getting the F-35’s out of Vermont also are based on the disproportionate effect that the jets have on marginalized communities.

“It is definitely all connected. I think that if we are going to address equity, we need to understand that all of our destinies are inextricably intertwined and we have to be assertive against warfare,” Eddins said. “We need to make sure that we can be unified in our efforts towards having a safe world to exist in.

The goal of the films and continued conversation around the issue for Bates is to raise awareness and get more community members involved.

For Eddins, an attitude of a more peaceful existence in the future is his goal.

“I hope that the films are an inspiration to join the movement and inspire an interest in a world without war and that jas equity and that serves everybody’s needs resourcefully,” Eddins said. “That’s an idea that I think everyone can get behind.”