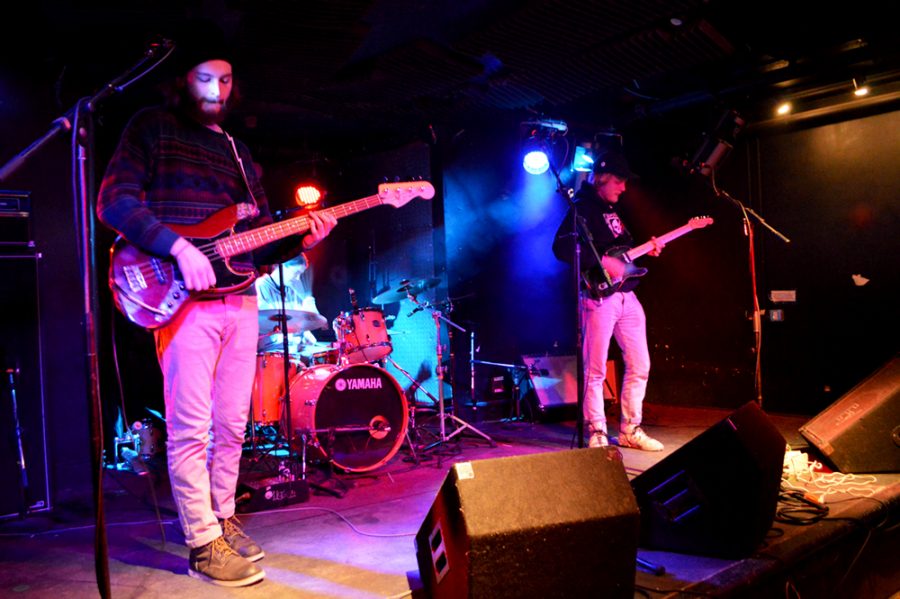 Student band Bison performs during the March 16 battle of the bands. The group was chosen to open for The Head and the Heart at SpringFest. JEN RAMIREZ/The Vermont Cynic

It’s not often one comes across a group of musicians whose music is as tasty as their band name, but Bison is one of those rare bands.

The self-described nomadic disco punk rockers will be opening this year’s SpringFest April 30 for Madaila and The Head and the Heart.

The band consists of junior K.C. Dressing on bass, senior Charlie Hill on guitar and vocals and junior Fabian Gaspero-Beckstrom on drums.

Bison made their way to the finale of Battle of the Bands March 16 and won a close victory over two other UVM bands, B.U.M.F. and Squimley and the Woolens. The win gave them the opening spot at SpringFest.

The group started playing two years ago.  Hill and Dressings, both from New Jersey, met at UVM and were soon joined by Gaspero-Beckstrom.

They played their first show together at Slade Hall, the environmental co-op on Redstone Campus which is now under construction.

Since then, Bison has been gathering fans and playing more live shows.

Each band member finds inspiration in various sources. For Dressings, inspiration comes from post-punk, synthwave and “anything in between,” while Gaspero-Beckstrom simply said he “listens to some weird stuff.” For Hill, inspiration can even come from performing. “Sometimes I just write about what I see on stage,”  Hill said in a Oct. 5 Cynic article.

Their expansive influences can be heard in their music. Songs like “Plug” float along beautifully with a mellow intro, while others, like “YFIO (You’ll Figure It Out)” start off sounding like an Alt-J cover and quickly morph into something more funky and energetic.

The name Bison came to Hill during a wildlife conservation class where he said he learned about the American bison.

The animal’s tragic history of near-extinction in the mid-19th century due to overhunting was significant to Hill, he said.

However, the American bison has since had a successful comeback, Hill said.

The band even said they enjoy eating bison.  “It’s pretty sweet to eat though,” Dressings said.

Bison will play nine shows in April including concerts at Sterling College, Stampede Fest in Winooski and, of course, SpringFest.

They will also have a residency at Radio Bean for the next month. Fans can catch them every Monday with the likes of Guthrie Galileo, Squimley and the Woolens and Hello Echo.

SpringFest “will be for sure be the biggest stage [we’ve played],” Hill said.

Bison has something special planned for their SpringFest performance, “something to keep it weird and different,” Hill said.