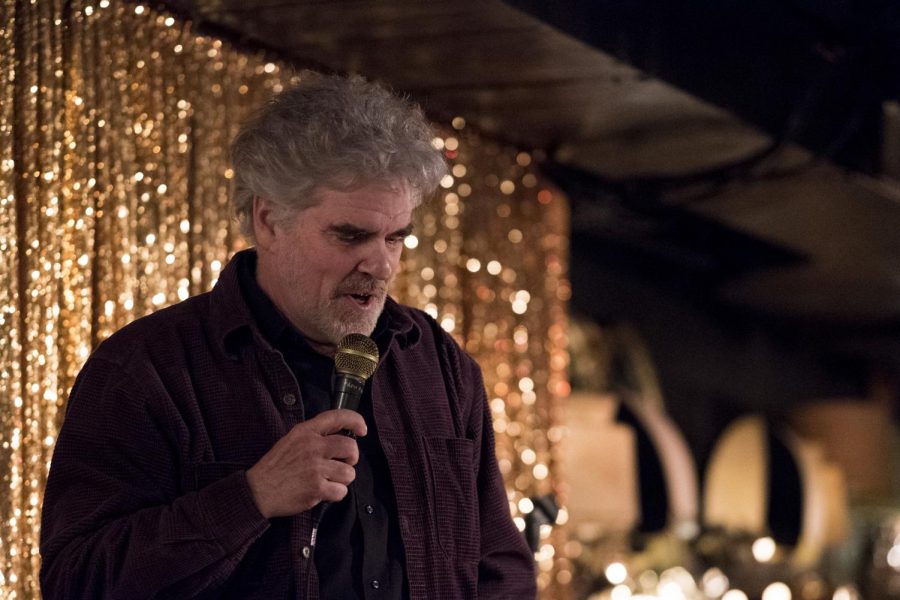 Gordon Clark tells jokes during his set at Death Talks, Jan. 28. Clark was one of a number of performers at the event, which took place at Light Club Lamp Shop.

“Death Talks” is a monthly variety show centered on death, its witnesses and fallouts.

After that, she had the idea to curate a creative dialogue and space for a dialogue about death and dying.

Before introducing the first performer, she offered the audience an assurance of community.

“Trust that tonight you are in the company of those that are just as dark and twisted as you,” she said.

Sophomore Megan Richardson attended the variety show and said that her perception of how to process death expanded after watching the performances.

“I found myself laughing at things and then absorbing the jokes and realizing that death can be processed through humor,” she said. “In a weird way, I feel more prepared for how it might be for me to lose a grandparent or a parent someday.”

Comedian Carrie Rae Shamel, a hospice nurse, performed first. She has been performing stand-up comedy in Burlington for the last six years.

“I worked in geriatric social work for many years and then in hospice, so I’m pretty aware of the social dialogue about death and dying,” she said. “In my field, laughing about death is something that makes it easier,” she said. “If you can’t laugh, you can’t get through.”

In addition to using a creative outlet to ease the emotional strains of her day job, Shamel wants to help change the perception about people who are at the end of their lives.

“There is so much ageism in our society, so I am even more passionate about supporting older people who are often isolated or not in touch with their families,” Shamel said.

Comic Gladys D followed Shamel, prefacing her set by sharing about her experiences at mortuary school in north Mississippi and career in the embalming industry.

D said she got into the death industry to protest the societal pressure to get a “normal job.”

“My hat’s really off to people that deal with, you know, not deceased people because that seems so hard,” D said. “They’re so angry or sad or sometimes joyful but you know, not silent.”

“We had a great turnout,” Kerrigan said. “I think people are just happy to have the space to talk about death and dying.”