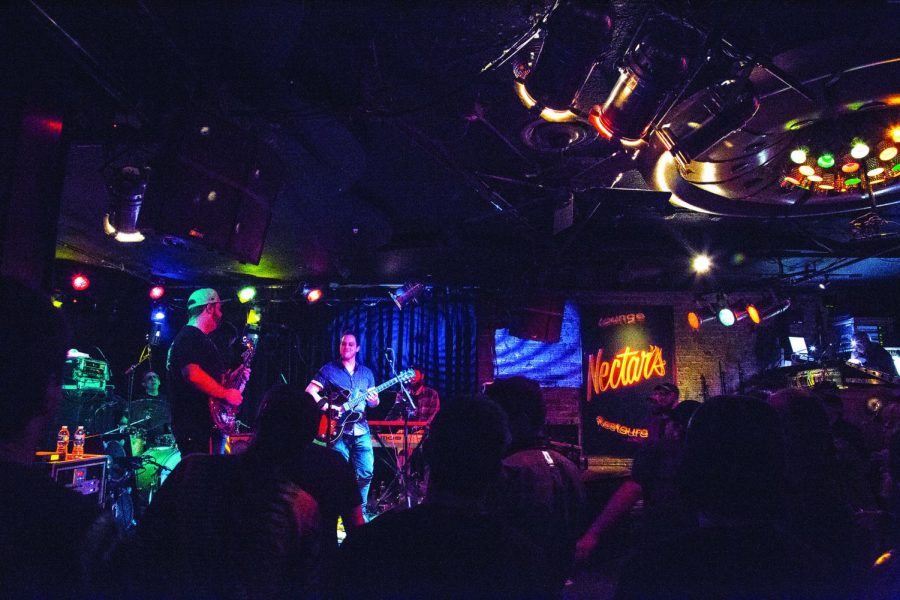 It’s been 30 minutes of waiting and shouted small talk attempted over the sound check, but when the first guitar notes hit the amps, the energy comes in all the more fierce.

Few can resist the call to flail arms, swing heads and scream joyfully.

At Nectar’s bar and restaurant in downtown Burlington, Dead Set, a weekly Grateful Dead tribute, has been livening up Tuesday nights since 2013. The series boasts a wide range of guest performers, from members of Phish to Lady Gaga’s keyboardist, Brockett Parsons.

Performers are encouraged not to perfectly mimic the Grateful Dead shows, and instead to play in “their own unique fashion but with unerring respect for that unmistakable Grateful Dead sound,” according to Nectar’s website.

Dead Set was initially inspired by Dead Sessions, a similar weekly jam band event that started in Burlington in 1998, Alex Budney, one of Nectar’s owners, said.  Dead Sessions has since expanded across the Northeast, according to its website.

Budney found mutual interest in a few musicians to create a local series, originally at Club Metronome. Dead Set was born, he said.

“It was kind of a perfect storm,” Budney said. “Something I’ve been trying to do for a while and just waiting for the right people to come about.”

For Nugent, the series was a way to explore his passion for the band and fill a need in the Burlington music scene.

“I wanted to bring a Grateful Dead product to town that we hadn’t seen yet,” he said.

The series quickly became more popular than the founders had expected.

“It was going to be this really relaxed thing, but it sold out right off the bat, and it became way more of a concert than we were expecting,” Nugent said.

Budney said that while Dead Set hasn’t changed much from its beginnings, the endurance of the community and growing number of fans surprised him.

Nugent said one of his favorite things about the Grateful Dead is the fans themselves.

“I really love how this music brings together such a community from all walks of life,” he said. “You go to a Dead-style or Dead-themed show and see college students, dentists, grandmas.”

Grateful Dead fans, aka “Deadheads,” have been a force in music fandom since the 1970s, according to a 2015 Time Magazine article.

Today, the community includes everyone from Whoopi Goldberg to George R. R. Martin and has been the subject of multiple documentaries, the article stated.
Although he doesn’t consider himself a “Deadhead,” senior Ryan McGee said he goes to Dead Set at least every other week.

“It’s really the experience I am looking for when I go out,” he said. “You sing along as you want, dance as you want, and it’s all fine.”