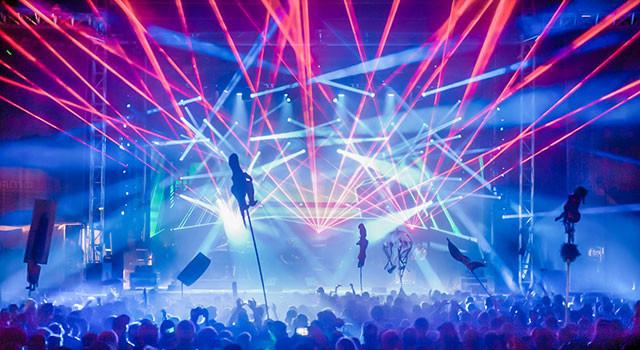 The Springfest artists have been announced and the Disco Biscuits and AlunaGeorge will grace the stage on the Chittenden Buckham and Wills green next month.

UPB revealed the news by unveiling the Springfest 2015 banner at the conclusion of the Battle of the Bands finale March 13.

“I am quite excited for the show, I’ve been at Springfest the past three years and I think this is by far the best music they have had yet,” admitted student Dan Ushkow said. “The Disco Biscuits have an incredible energy to their music and it’s going to be great having them play in Burlington.”

Doctor Rick and Loose at the Root, the two winners from the Battle of the Bands, will also perform as the opening acts.

“We will have two bands opening – they were so good we couldn’t just pick one,” UPB concerts committee member and junior Angela Russo said.

Junior Zach Santarsiero of Doctor Rick said the band is excited to get their music to new ears and shre the stage with Disco Biscuits.

The Disco Biscuits are an electronica jam band from Philadelphia. They consist of Allen Aucoin on the drums, Marc Brownstein on bass and vocals, Jon Gutwillig on guitar and vocals and Aron Magner on keyboards and vocals, according to their Facebook page.

They have been together for 20 years and have been bringing “fresh biscuits to your door since 1995,”according to their Facebook page.

AlunaGeorge is a London-based pop duo composed of Aluna Francis and George Reid.

“We’re really excited, UPB concerts is putting in a lot of time and effort and we went through a very long deliberation process and we finally got this out of it, an awesome result,” Russo said. “We’re ecstatic and we hope other people are really excited too.”

“I’m actually super disappointed about who we ended up getting,” senior Michaela Madden said. “UPB never asks the student body who they want and it’s just so upsetting that they got someone that only a fraction of the student body listens to.”

Despite the mixed opinions, UPB’s members still have more to share in the coming weeks.

“We’re going to have some surprises – we still do have some tricks up our sleeve so there’s more to come,” Russo said.

“We’re doing something really exciting this year that I am not going to say yet since it is not confirmed yet,” said Queena Hoang, assistant director of campus programs for Student Life. “We’re just trying to figure out where it is going to go.”

Tickets are on sale now and are $10 for students at the UVM Bookstore or flynntix.org.