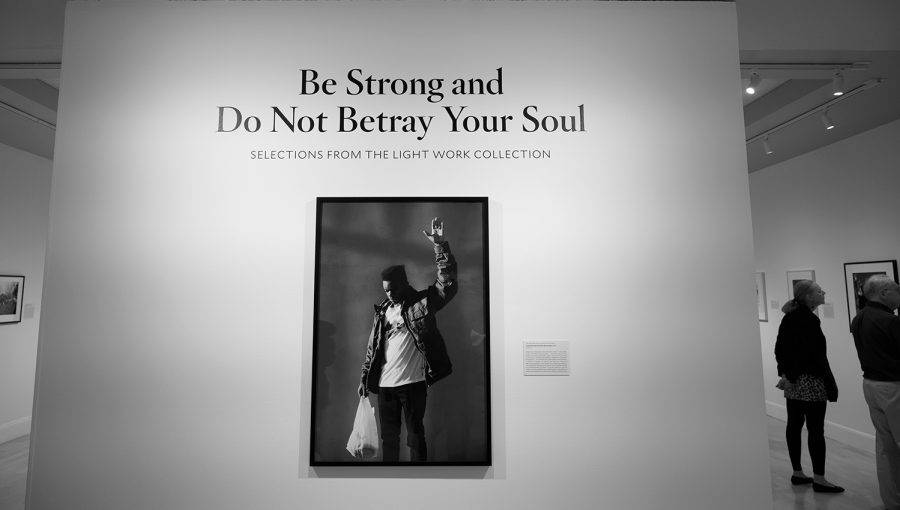 The words, “Be Strong and Do Not Betray Your Soul,” along with a photograph taken by African American artist John Edmonds is the first piece museum goers see as they enter the exhibit of the same name. The exhibit is on loan to the University until Dec. 23.

A print of a black janitor mops the floor of a war memorial with American flags looming over his head in a new exhibit.

Commentary on the essence of America‘s history flows from the artworks of Fleming Museum’s fall 2019 exhibits.

At the opening reception Sept 27, the new exhibits titled “RESIST! INSIST! PERSIST!” and “Be Strong and Do Not Betray Your Soul,”, featuring student curated works and selections from the Light Work collection, were revealed.

The Marble Courtroom echoed with light banter, but upon entering the exposition rooms, the expressions of observers of the Fleming Museum’s collection grew somber and thoughtful.

The results provoked strong emotional responses in both faculty and students of the event.

Maud Mayer ‘19 is one of the curators for the exposition titled, “RESIST! INSIST! PERSIST!”

She said that the themes of adversity, oppression and persistence came about naturally as students examined the Fleming’s large collection of artwork.

“We were in the midst of all this political change, and we realized it would be appropriate for us to discuss those topics in our classroom setting and then connect them to the art we were looking at,” Mayer said.

The student curated exposition draws on themes of systemic racism, injustice and the power of expression. The exposition is further diversified with the inclusion of 47 artists with both newer and older works.

Curator of the Fleming Museum, Andrea Rosen, works with students on the production of the exhibits.

“Sometimes we are looking to make a show that comes from our own collection, and we find a theme, draw some interesting works together and go from there,” Rosen said.

Rosen said that one of her favorite works depicts the abdomen of a black man with the Nike logo etched into his chest. She said that discussing the meaning behind pieces such as this and collaborating with students is a rewarding aspect of her job.

“Sometimes students take on [creating the exhibits], and sometimes we take on a traveling show, a show curated by someone else, which is the case with this show [“Be Strong and Do Not Betray Your Soul”],” Rosen said.

A photograph titled “Un hijo de Yemayá” is a black-and-white piece of a young black boy from Belize. He is submerged in water from his nose down, staring straight into the camera.

According to Rosen, the show focuses on the narratives of people deemed unimportant by the greater part of society.

Another painting titled “Blue Plate Special” is of the severed head of a black man being served on a platter.

Junior Sanjna Krishnan said that UVM students are widely familiar with the school’s history of outspoken activism and that the exhibit prompted her to think about what activism means to her.

“This whole collection is interesting to show at this school. It’s a very distinctive choice and that speaks to the nature of what’s going on,” Krishnan said. “You get under the surface of the culture at this school, the environment and what our school values.”

Interim Provost Patricia Prelock was the host of the reception. She said that she hopes the fall reception will give the Fleming more attention, and that the museum is a gem to have on campus.

“[The Fleming Museum] has generated a lot of inquiry and dialogue across our campus, and that’s what’s so powerful,” Prelock said. “It moves you in different ways, and you can really reflect on your experience from a different perspective.”

Both exhibits will be open to the public until Dec. 13.