Art has the ability to take the viewer to different places across space and time.

In two new exhibits at the Fleming Museum, “Pop Art Prints” and “Samuel Bak: Survival and Memory,” viewers are taken to different eras.

The pop art exhibit not only takes visitors back to a time in history when popular culture in art was a new and revolutionary concept, but also forces them to take a step back and take a good look at the world we live in.

From Mel Ramos’ controversial prints, often depicting nude women and the rapid change in the advertising industry in the mid-20th century to Andy Warhol’s striking images of police brutality and other social issues, pop artists gave viewers something that both challenged them and felt relatable to their culture.

In regard to the attitude within the pop art movement, “sometimes it’s a critique, sometimes it’s a celebration, but usually it’s a complicated mix of those things,” curator Andrea Rosen said.

This time period was also critical for female artists, who were struggling to be part of a male-dominated art world. 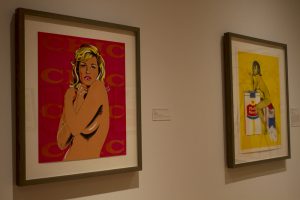 Museum Director Janie Cohen touched on this at the opening reception Feb. 10, encouraging people to look out for female pop artists whose work was being displayed in the exhibition and watch the film “Seductive Subversion: Women Pop Art- ists, 1958-1968.”

Bak’s work, on the other hand, is heavier.

Although he made his art-work in response to the trauma he faced during the Holocaust, Bak does not depict pictures of death or make you shudder in horror. 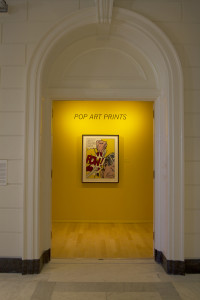 Instead, he makes you think. His portrayal of the Holocaust in a symbolic way causes viewers to think about humanity in a broader sense.

Often using surrealism in his work, Bak plays with landscapes and incorporates people and ob- jects that are personally meaningful.

For example, he repeatedly uses enlarged pears as symbolic images in his paintings, representing various themes such as the fruit eaten by Adam and Eve.

It seems that Bak does not want his viewers to be horrified, but rather to encourage them to consider the symbolic meaning in order to process horrifying events.

Features such as these are what make the Fleming Museum such a unique place for stu- dents.

Professor Steve Budington and J. Brooks Buxton, chairman of the museum’s advisory board,

pointed out how incredible it is that students have this chance to see these renowned pieces of artwork firsthand.

In curating the event, Rosen said “seeing the actual object in person” is important.

Rosen said she doesn’t think this needs to be a stressful experience, though.

“The Fleming is always free for UVM students, and it’s just a good respite.”