Grief and puppets take the stage this week 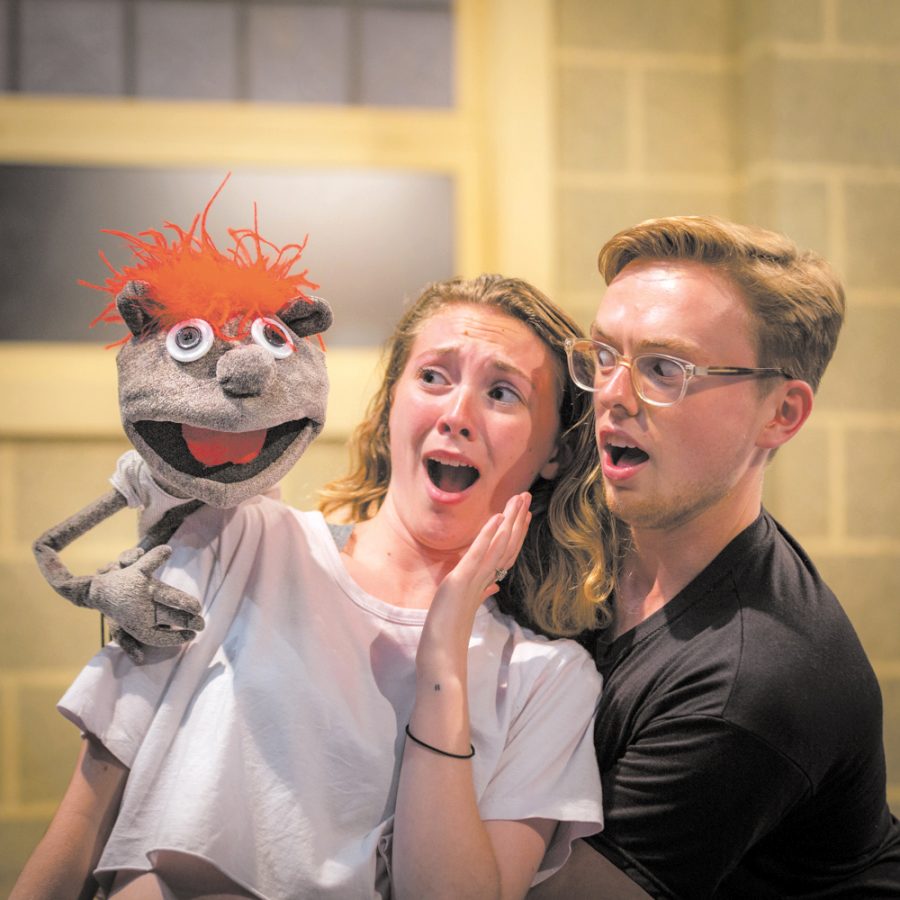 Juniors Caleb Chew and Kristen Brown are leads in the UVM Department of Theatre’s production of “Hand To God,” running Oct. 3-7 at the Royall Tyler Theatre. “Hand to God” is a dark comedy about a teenager who winds up performing in a church puppet show that soon appears to be possessed.

“Hand to God” is a dark comedy about a teenager, Jason, in a small Texas suburb who, while dealing with the aftermath of his father’s death, winds up performing in a church puppet show that soon appears to be possessed.

The show was based off a twisted version of playwright Robert Askin’s experiences growing up, said director Craig Wells, a lecturer in the theatre department.

The weirdness of the play is part of the appeal, Wells said.

“We wanted a chance to bring something a little obscure and out-there to a Vermont audience,” he said.

“Hand to God” was the most produced play of 2016 in regional theaters across the country, Wells said.

“The play has always had a following and a devoted interest by people who believed it had something to say,” he said.

Some of the themes, including mental health, religion, responsibility and sexuality, can be shocking, but they resonate with audiences, Wells said.

UVM Theater often chooses plays that will challenge their student actors, and tackling these subject matters made the play difficult, he said.

Actor Michael Daley, a senior, agreed, saying that balancing the tone was tough.

“The thing about dark material [is] if it’s done well, it sends a message,” Daley said. “It helps the audience feel things and understand the world from a different viewpoint.”

The strength of the cast was essential to making the play a success, he said.

“I don’t think we would be able to get through without the strong sense of community that erupted from it,” Daley said.

The play presented a number of physical challenges for the actors as well.

In addition to the difficulties of acting opposite a puppet, the actors were given intimacy coaching, Wells said.

This sort of coaching involves teaching actors how to handle complex emotional scenes, often involving violence, while still being respectful of each other on stage. The training forced the students to be more aware of how they interacted, Wells said.

The play takes advantage of theater’s ability to convey raw energy and emotion like no other medium, he said.

“It’s a really unique experience,” Wells said. “Storytelling is happening in the moment.”

Even with the grim humor, much of the play is about hope.

“[It shows] that people will find a way back together, that we need to be there for each other,” Wells said.

Senior Michelle Beaupre said she liked the inclusion of more out-of-the-ordinary plays at UVM. “This is right up my alley,” she said.

“Hand to God” is UVM theatre department’s first production of the year. It will be followed by “Tartuffe,” a classic comedy, and the musical “Pippin.”

The department intentionally tries to keep the lineup diverse to give the actors more experience, something most theaters aren’t able to do, Wells said.

This play is a good opportunity to explore a different kind of theater, Daley said.

“The Burlington community is diverse in everything they do, so it’s good to a present a variety of different plays,” he said.