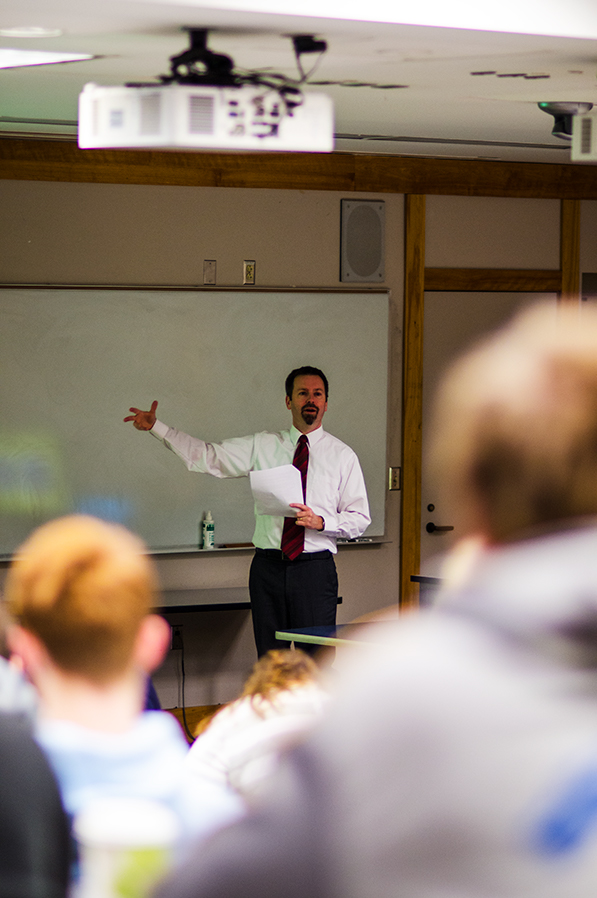 Professor Sean Field lectures to his “Early Europe” history class, Feb. 2. Field, who co-wrote the book "Visions of Sainthood in Medieval Rome: The Lives of Margherita Colonna by Giovanni Colonna and Stephania," was honored for his publication.

Students and faculty mingled around a long wooden table. Some flipped through the pages of freshly printed hardcover books Everyone showed excitement and anticipation.

On Jan. 26, students and faculty gathered at Alumni House to honor research published by professors in the history department.

Many history department faculty members discussed their scholarship and work. The discussed the impact of the Holocaust on non-occupied countries and the work of the French bishop Giles of Rome.

Professor Bogac Ergene was among those who stepped up to the podium to speak about his work.

Ergene he worked with an economist to write about the Ottoman Empire’s justice system. Ergene stressed the importance of cross-discipline work in the pursuit of knowledge.

Professor Sean Field co-wrote “Visions of Sainthood in Medieval Rome: The Lives of Margherita Colonna by Giovanni Colonna and Stephania” for University of Notre Dame Press.

His work on disruptive noblewomen in 13th century Rome was among the recently published books honored.

“It’s exciting for our whole department, because it’s a nice chance to remind students, colleagues and important administrators what we do as historians,” Field said.

He elaborated on why he thought this celebratory event was important, while seated in his office in Wheeler House.

He believes it is important to spend time with faculty outside of the classroom, and also urges students to attend cultural events, he said.

“Students don’t always think about those opportunities and they might learn a great deal there that might bring other things into focus,” Field said.

Sophomore Louis Augeri, who attended the history department’s celebration, said his peers should attend these kinds of events with their professors.

“It’s good to see what professors are doing on the other side of the veil and not just in the classroom,” Augeri said.

Sophomore Nathan Raike said joint faculty-student events are valuable for students who are undecided about their area of study.

“I would recommend events like this to other students, particularly those considering history as a major or minor,” he said. “It gives you an opportunity to pick the brains of the people that write books and relevant research.”

Before the end of the event, President Tom Sullivan spoke about the importance of history and the humanities to building a civil society.

Sullivan has authored 11 books, according to his biography.

Students have much to gain from going to events where faculty are discussing their research, he said.

I became a faculty member largely because I was inspired by faculty when I was a student.”