Hit Paws a cappella gets cozy at Pajama Jams 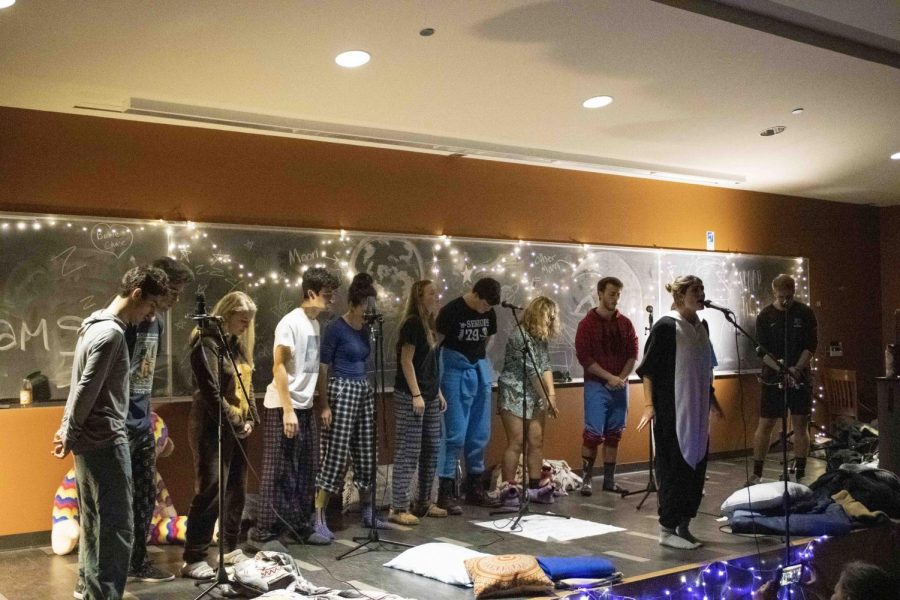 The members of Hit Paws sang in harmonious chorus while bouncing around stage in their coziest pajamas.

Hit Paws, a UVM a cappella group, performed a concert Nov. 15 in Fleming 101.

As the temperature dropped days before the event, pajamas provided extra warmth on the cold Friday.

“We went for a cozy feel, and I think we achieved that,” Bohrs said.

The group decked out Fleming’s stage with fairy lights and plush pillows.

Before the show began, one member began warming up. They started singing  a note, and the other members built off of each other, creating a freestyle song.

The night progressed with a variety of songs and many laughs. Some performances included “The Night We Met” by Lord Huron, “Somewhere Only We Know” by Keane and “I Want You Back” by the Jackson 5.

First-year Joe Consorti, a member of Hit Paws, said the pajamas added a level of humor and fun to the performance.

“The onesies were a very cohesive theme,” Consorti said. “I think we put on a banger of a show.”

Many students in the audience came to support their friends in Hit Paws and enjoy the laid-back show.

Junior  Ella Spencer said she felt emotional while her friend, Bohrs, performed the song “Diddy Bop” by Louis the Child as a solo.

“My favorite part of the show? All of it. I cried four times,” she said.

The Hit Paws have an EP out on Spotify, titled “Outdoor Cats.” Spring auditions for the UVM Hit Paws will occur during the second week of spring semester classes.