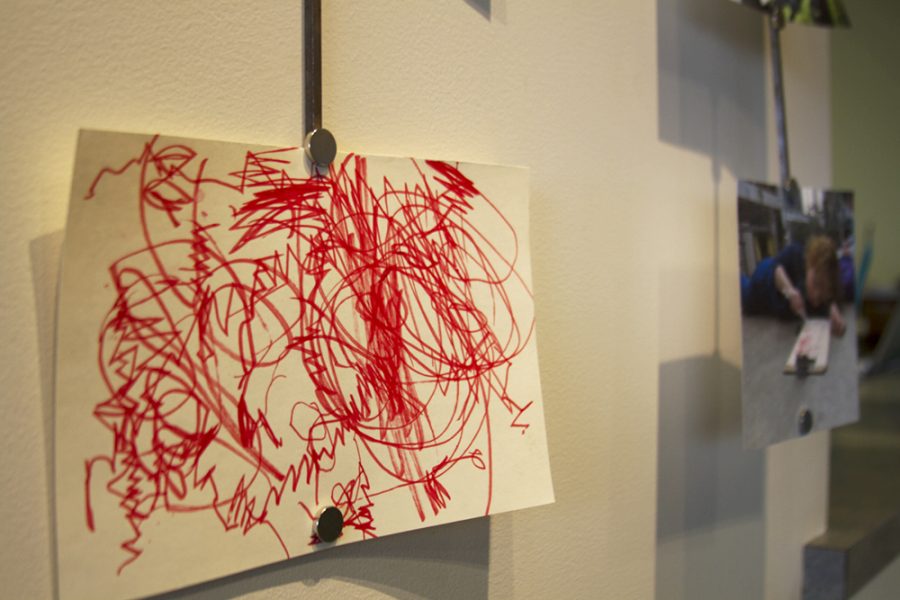 Since last week, new art by young artists has adorned the walls of the Davis Center.

The students from the Campus Children’s School in the Living/Learning Center showcased their talents at their second annual art exhibit in the Livak Fireplace Lounge Feb. 2.

The artists ranged in age from four months to five years old.

Both classes, the Infant East Room and the Toddler Room, focused their artwork on the campus as seen through the eyes of children, according to mentors and teachers, Cecilia Puleio and Chelsea Reynolds.

“We as a staff reflected on how we use campus, [meaning] our classroo
ms around the school, then thought about a way to represent that through various mediums,” Puleio said.

“We go all around campus and visit families,” she said. “That’s our connection on campus, because almost every child in this class has a family member on campus.”

The infants painted with watercolors over photographs of some of their favorite buildings on campus.

The older children in the Toddler Room, who frequently take walks on campus, worked in small groups to draw maps of campus, Reynolds said.

Amittai, a preschooler in the Toddler Room program, drew multiple parts of one of the maps.

“I drew the waterfront, airport and turf-field,” Amittai said.

The maps give the children’s view of the grounds UVM students walk every day.

“You can see some of the familiar spaces that children identify as spots on campus,” Puleio said. “Zombie House, the Davis Center – some of them are similar to what we as adults call them and some of them are dif- ferent.”

Eiby, the five-year-old behind the name “Zombie House,” briefly detailed his expedition, citing viewings of “real zombies” on campus. 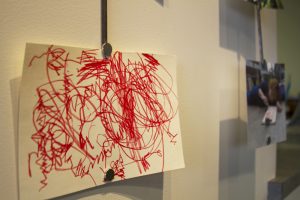 Reynolds said she took a different approach with the younger children. Her classroom, consisting of preschoolers ages one to two-and-a-half, also goes for walks around campus, she said.

“We go to the green house quite a few times, especially in the wintertime,” she said. “So we used that space for exploring things as scientists and also through representational drawings and paintings.” 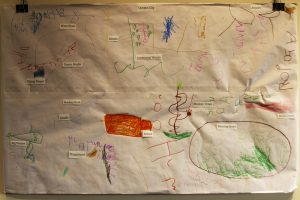 In addition to refreshments and artwork, the Campus Children’s Second Annual Art Exhibit had a four-piece live band for the children to dance to.