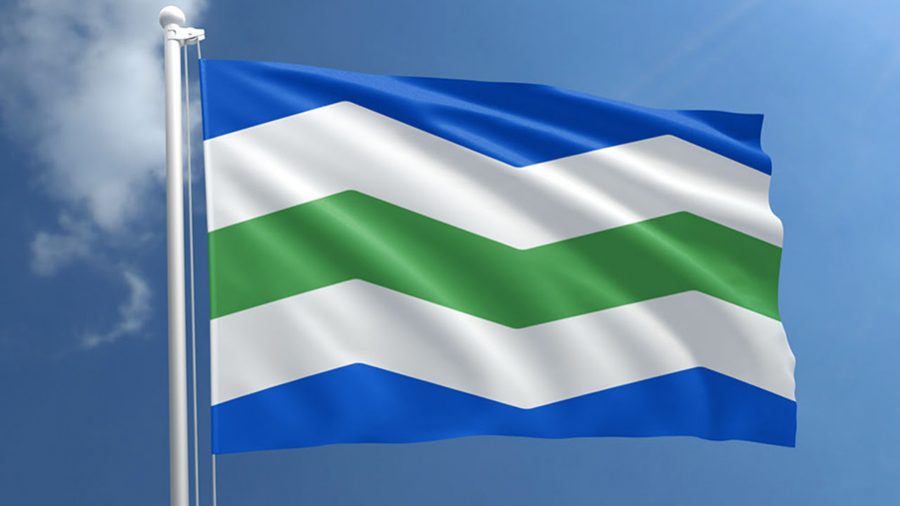 The new City of Burlington flag as designed by local middle schoolers Owen and Lucas Marchessault. The flag represent Vermont’s sky, snowy mountains, the Green Mountain State itself and the breakwater and local beauty of Lake Champlain.

Burlington’s spirit, history and environment will soon be represented by a new city flag, courtesy of a local family.

The city of Burlington allocated $6,000 to create a new flag, which was proposed by Mayor Miro Weinberger and unanimously accepted by the city council January 2017.

A statement issued Nov. 27 from Burlington City Arts detailed the contest, noting that 138 possible designs for a new city flag were submitted.

Voting began Oct. 20 for the seven finalists whose designs were selected by a small resident-based committee. Ted Kaye, a renowned flag expert, oversaw the committee, according to the statement.

Burlington’s residents voted on a winner and, with nearly 1,500 votes cast, middle school students Owen and Lucas Marchessaults’ design received the highest score. Their design was announced Nov. 20 as the next city flag.

Owen and Lucas are twin brothers and seventh-grade students at Edmunds Middle School in Burlington.

The boys’ mother, Molly Abair, said the hardest part in the process of creating the flag with her sons was narrowing down which design they liked best.

“We had many flag designs drafted,” Abair said. “One depicted Church Street while another featured a maple leaf. It took a little time, but we agreed that the striped flag with two peaks was the one we all liked the best.”

The flag’s colors represent Vermont’s sky, snowy mountains, the Green Mountain State itself, and the breakwater and local beauty of Lake Champlain, the Marchessault family said.

“The boys’ grandparents have a boat and often take us for rides on Lake Champlain,” Abair said. “The inspiration for the layered colors, each representing a different aspect of the city, was the beautiful view of Burlington from Lake Champlain.”

The Marchessaults’ new flag will be raised at 4 p.m. Dec. 31 at First Night Burlington. The Marchessault family will receive a reward of $250, a one-year membership to BCA and a flag showcasing their design.

“We’ve been overwhelmingly impressed with this entire process and it reflects the best of Burlington and its citizens,” Abair said.

More details of the contest’s process, requirements and selection committee can be found on the BCA website, www.burlingtoncityarts.org.