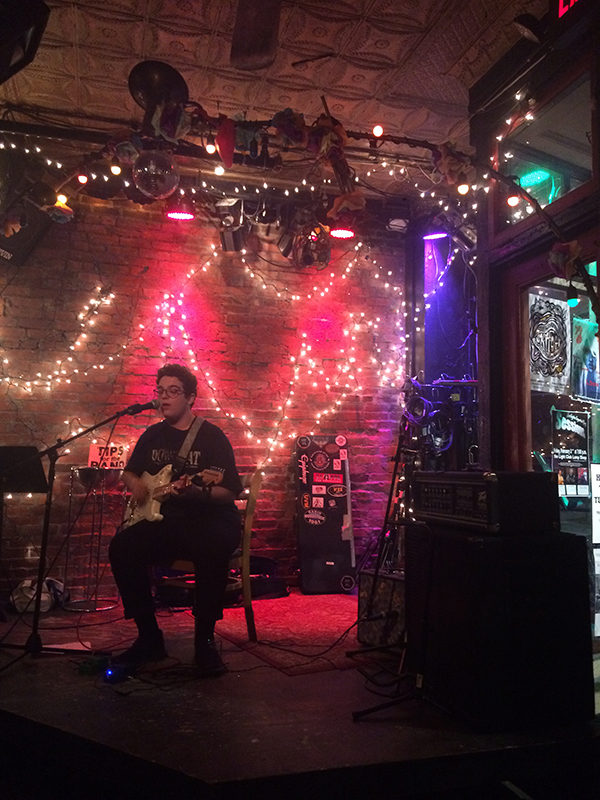 Full Walrus performs at Radio Bean Jan. 31. Full Walrus, who is sophomore Noah Schneidman, will be performing at 7:15 p.m. Dec. 6 at ArtsRiot.

When sophomore Noah Schneidman isn’t busy double-majoring in philosophy and music technology, he makes and performs his own music under the stage name Full Walrus.

He describes his music as “melodic and reverby rock.”

“It’s me trying to emulate my favorite artists and doing a bad job, so it ends up being my own version,” Schneidman said.

The name Full Walrus was derived from Kevin Smith’s comedy horror film “Tusk,” the story of a man who is turned into a walrus, he said.

Schneidman, who can be recognized by his distinctive circular glasses, has been making art for as long as he can remember.

“I’m from Woodstock, New York, so I’ve been interested in music since I was born,” he said.

At 14 years old, Schneidman had his first memorable musical moment, he said. At a battle of the bands competition, he performed spoken word poetry over background noise – an act he thought was silly but realized people enjoyed.

“I realized then that even when I was not taking myself too seriously, I could still make an emotional impact,” Shneidman said.

Though Full Walrus has been writing and performing his own songs for two years, he had a difficult time breaking out into the Burlington music scene.

My demos were rough, and I couldn’t get people to take them seriously, Schneidman said.

Full Walrus was noticed by a booking agent while performing during the College Battle of the Bands at ArtsRiot last spring, Schneidman said.

“He liked my music and quickly introduced me to everyone you need to know in the Burlington music business,” he said.

Full Walrus has since performed with both other Burlington and UVM bands like Calvin Coolidge, 2% and Bad Posture.

“But I only play guitar well,” he said.

Sophomores Adam Slamin and Patrick Fagan, as well as senior K.C. Dressing of the band Bison, play with Schneidman on recordings and performances, he said. Slamin plays saxophone, Fagan plays the drums and Dressing plays the bass.

“[Schneidman] brings the songs to the band and we just figure out everything from there,” he said. “Also, the shows are hella tight.”

In the last few months, Full Walrus has performed at many of Burlington’s top music venues, such as ArtsRiot, Nectar’s and Higher Ground.

“You can also find us at your local basement,” Schneidman said.

Although Full Walrus has previously released music – such as the project “Sleeping Tapes,” which Schneidman self-recorded and produced his senior year of high school – he is now working on his first serious album, he said.

Schneidman’s music can be listened to on his Bandcamp page.

Full Walrus is performing at 7:15 p.m. Dec. 6 at ArtsRiot. Admission is free and the show will also be filmed and recorded for TV and radio.