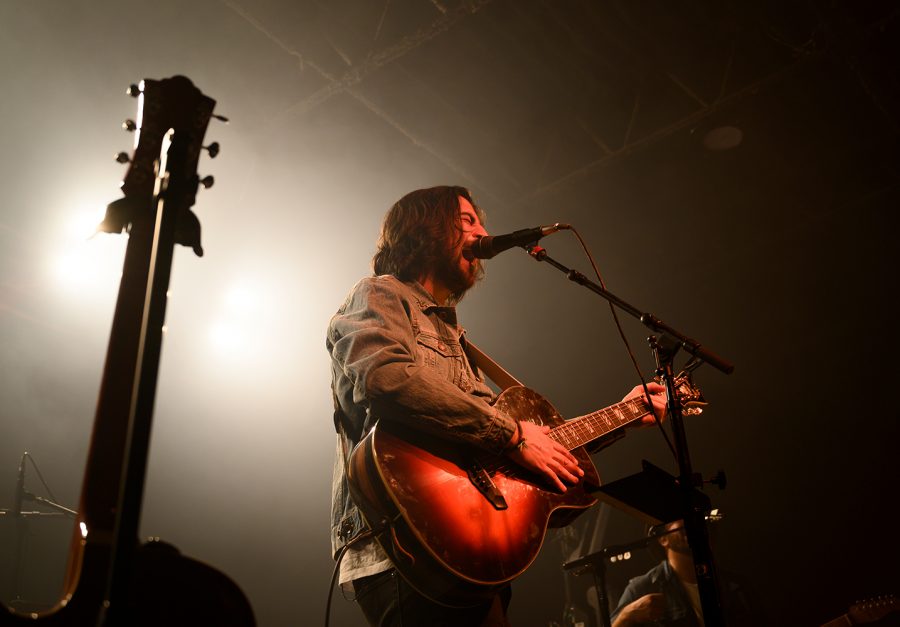 Noah Kahan performs on stage at the Higher Ground Ballroom, Oct. 10. The show, which sold out, was a part of Kahan’s “Busyhead” tour.

The background music cut out as colorful lights illuminated the picturesque mountain set on stage while friends and fans cheered.

For the world famous folk-infused pop artist, who grew up going to concerts and competing in singer songwriter competitions in Vermont, he said performing at Higher Ground meant a lot.

“I would come in second every year, and now I’m selling out at the big room,” Kahan said. “It’s the coolest, most realized challenge that I’ve ever had and being able to headline here is a dream come true.”

The 22-year-old’s musical success was launched by a SoundCloud single titled “Sink.” Its popularity granted him attention from record label Republic Records, who he signed with in 2016. Shortly after, his first single, “Youngblood,” went viral.

In just three years he went from life residing in rural Strafford, Vermont, with a population of 1,079, to being a well-known name.

“Being in big cities, traveling around the world, meeting so many new people and trying to adapt to that lifestyle has been a challenge,” Kahan said. “It’s been amazing though.”

Kahan said that he feels as though everything has changed and that his life has taken a 180-degree turn. Since being on the road, he has experienced a lot of successes and failures, causing him to mature.

Emilee Bartusek, a merchandise manager for the tour, met Kahan while he was playing small room venues in Venice, California. He sees only positive changes since Kahan’s fame has skyrocketed.

“I think he has a specific confidence about him now,” she said. “He’s realizing that his talent is worth people listening to. Other than that, he’s still a bright eyed and bushy tailed guy.”

Kahan talked about the low points he endured throughout his journey and explained how being honest with himself during those experiences fuel ed his music. He said “Busyhead” is a collection of snapshots that portrays this period of transition and discomfort.

Listeners can hear about Kahan’s doubts, anxieties, failures and ultimately, how he finds balance in his new reality. This honesty is something that Kahan values in his work and wants to reach his audience.

“I hope that people who listen to my music are able to be honest with themselves the way that I try to be honest in my music,” Kahan said. “The great songs really connected me with the artist. That is what would really like to achieve, people to feel as though they have a connection to me.”

Vermonter and first-year Zoe Macdonald has been listening to Kahan’s music for over a year and recognizes the intention in his lyrics. She said that the openness of  his songs is something that many artists lack.

“I feel like his music is very reflective of the things that he has gone through,”Macdonald said. “I think that’s necessary to really connect with the audience.”

For her, the track titled “Carlo’s Song” is one that makes her feel close to the artist because of a shared experience about losing a friend. She sees this an inspiration for her own music.

“He has inspired me to be more honest with the things that I have gone through and letting it  shape your work,” Macdonald said.

Another musician, first-year Lance Tanner, is a fan of Kahan because of the emotional bond he demands with each person in the audience when he performs. Tanner got to experience this on Friday night when he attended the concert.

“Being an audience member there, you feel very connected to him and everyone around you,” Tanner said. “It creates an environment of vulnerability and emotion that every musician strives for.”

For other young artists wanting to share their work with a larger audience, Kahan had words of advice.

“Don’t be too picky about messing up. Making bad music for awhile can mean ultimately getting into some really great music,” Kahan said. “Make sure that you are not comparing yourself to other people, just focus on what you do.”

Kahan walked back on stage at the end of each night, ushered by a cheering and applauding audience to perform his encore. Dressed in a Catamount jersey, the Vermont star thanked the crowd once more.

“Vermont has had my back through all of this,” he said. “Thank you.”

The appreciation was reciprocated as fans cheered him into his two closing songs.