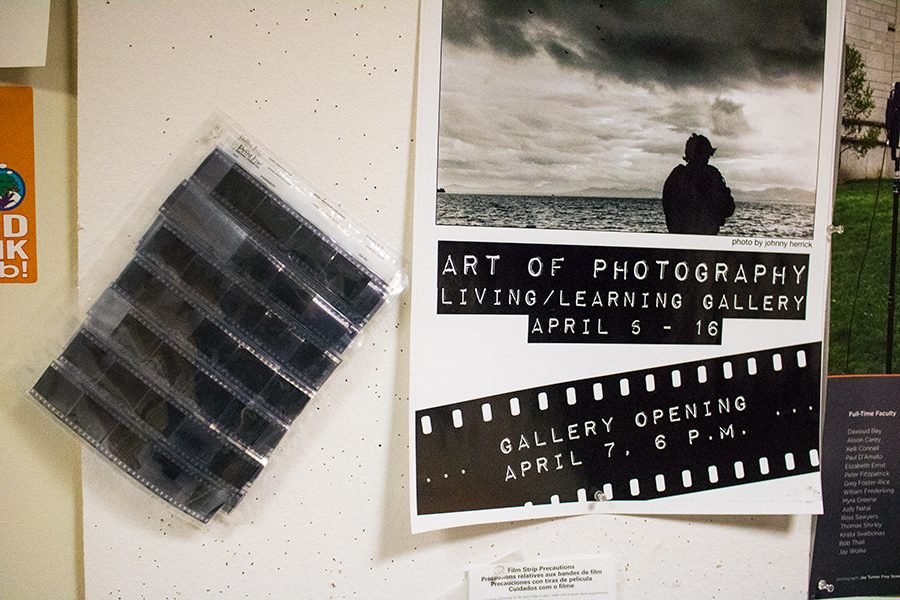 The Photo Co-op in the Living/Learning Center gives students access to the facility for $90 a semester. The Co-op offers a fully equipped darkroom and individual instruction in film photography.

We may be living in the digital age, but some members of the UVM community are throwing it back to analog days by learning and practicing black-and-white film photography.

The Photo Co-op in the Living/Learning Center is a space for UVM students, staff and  their families to develop their creative photography skills.

For $90 a semester, students have access to the facility and its fully equipped darkroom, as well as individual instruction.

All necessary equipment, including film cameras and a Mac laboratory for scanning film negatives and editing them digitally are included, according to its website.

The Co-op, which is a program of Residential Life, has been under the direction of coordinator Ann Barlow for the last 13 years.

Barlow is a professional photographer and has displayed her work in dozens of solo and group exhibits, according to her website.

The Co-op offers a unique opportunity for students and community members to gain hands-on experience in film photography, Barlow said.

“Students go through the whole process from taking the picture to developing film, to printing in a relaxed, non-credit-bearing, non-graded setting,” she said.

The Co-op offers programming for film photographers with any level of experience, including short workshops that give newcomers a general introduction to the subject.

During February, the Photo Co-op has been offering a three-class series called “Intro to Darkroom.”

The space is also the perfect place to “meet and connect with others that have a similar interest,” she said.

“There’s plenty of room for growth and to engage with more students, Barlow said .

Sophomore Jake Schevling,  who is currently taking classes in environmental science, finds the Co-op valuable because it’s a way for him to stay connected with his creative side.

“I became interested in film photography in middle school,” he said, “but in high school I switched over to digital, and the Co-op is a great place for me to develop skills in both.”

Sophomore Lucas Herrera-Mindell’s interest in the Co-op is more abstract.

“My favorite part of working in the co-op is the darkness,” he said. “I rely on the rest of my senses to make sure I develop the photos right.”

There is something about the process of developing film that Herrera-Mindell also enjoys.

“The time it takes to print the photos makes them more important than instant photos. I like all the control I have, much more than when I take a roll to the pharmacy,” he said.

The Photo Co-op has much to offer students of all abilities and interests, and, according to Barlow, is an artistic, on-campus space that deserves more attention.

“I feel that the darkroom is a hidden gem and would love to see more people take advantage of this great resource,” Barlow said.