Professor pursues the truth in poetry

At its root, the intent of poetry can be seen as the pursuit of truth.

Genuine and explicit about her past experiences, Elizabeth Powell’s poetry reminded an audience at the Fleming Museum of that original purpose.

The room was crowded, with students sitting on the floor.

Powell was previously a lecturer at UVM, esteemed by students and professors alike. 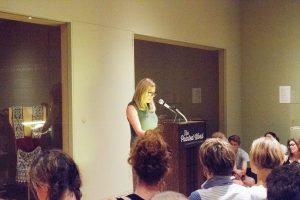 Her colleagues in the English department read many of her first drafts.

“You helped me write about my own identity and inspired me to write in my own voice,” Powell said to UVM poet, professor and curator of the series, Major Jackson.

“I find [the book] rare in its complexity and beauty, how it experiments with multiple forms,” Jackson said.

Like her peers, Powell writes from a feminist perspective, shedding light on female identity, gender roles and family dynamics.

Using her favorite childhood play, Arthur Miller’s “Death of a Salesman,” as a template,  Powell explores the complexities of familial relationships. Miller’s drama lacks a female voice, so Powell created her own: the reckless daughter.

As a child she imagined her intermixed American family, including her Jewish father and Episcopalian, white Anglo-Saxon Protestant mother, as a living drama, similar to the family in “Death of a Salesman,” Powell said.

She has been writing her book for 15 years, believing one must experience first in order to write. “We must live the questions,” Powell said.

Her poem “Will” was written after her father’s death and uses a collage of words and phrases from his will to create a narrative.

The event was curated by the English department and hosted by the Fleming Museum.

In it’s ninth academic year, the Painted Word Poetry Series is a staple at the Fleming. The next reading will feature poet Tess Taylor Nov. 16.