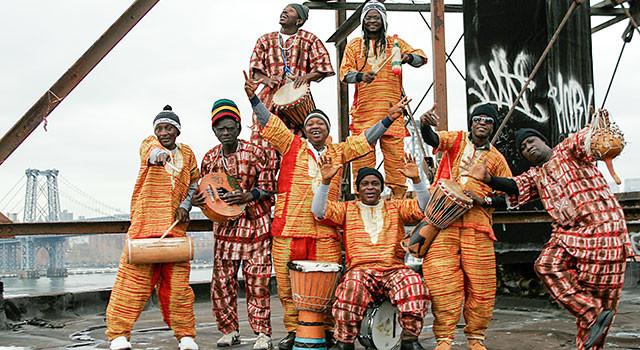 In the midst of a brutal genocide a group of refugees, brought together by war and a common interest in music,  played to ease the burden of war  for their fellow countrymen.

Sierra Leone experienced a brutal genocide during the 1990s that forced much of the population to seek refuge elsewhere.

Although the terror of war is what brought the band together, it is also what allowed them to ease much of the pain it induced Koroma said.

Not only has the band achieved fame within the music industry, but they also have a documented film. The film, which was named after the band, spread their story and eventually, their mission.

“I feel the film was the main exponent of our fame. The movie explains us and gives us the foundation of our recognition today” Koroma said. “People are touched by our music and our story”.

Since they are now able to return to their country, they have been able to expand their missions. Their current project is focused on the Ebola crisis in their homeland.

Traveling back and forth from their homeland and the United States, they have been cautious about the recent development of Ebola.

Although they cannot physically be in their homeland, they continue to work there to help aid their people as much as they can, Koroma said.

The band has received various forms of support. They appeared on “Oprah” and have welcoming fans that open up their homes for them.

They also collaborate with other foundations and anyone who is willing to lend a helping hand.

Koroma referred to the band’s style as “a West African blend of music.”

Their music varies from a type of reggae that originated in Sierra Leone, to using more acoustic instruments that can be heard on their most recent album “Libation,” Koroma said.

The Sierra Leone Refugee All Stars have worked with other American artists.

“We are very open and enjoy exploring different aspects of music” Koroma said.

“We try to have that influence in our music.”

They have worked with Aerosmith and many other artists such as Paul McCartney, Angelina Jolie and Ice Cube. After the conflict and gaining fame, the group strove for their music to carry their message.

“As a group, they brought so much energy and joy to the stage. They would stop throughout the show to explain the history of Sierra Leone, and the injustice brought down on its people as a result of war,” junior Connor Myers said.

As they have become more familiar with different cultures, their music has taken multiple twists and turns. While they maintain their traditional music, they have also been very open to new instruments and different sounds.

Sierra Leone’s Refugee All Stars play their next show in Montpelier, VT  March 13. They will debut their fourth album, “Libation,” which was recorded in Plainfield, Vermont.

More information about their missions can be found on their website, sierraleonesrefugeeallstars.com.