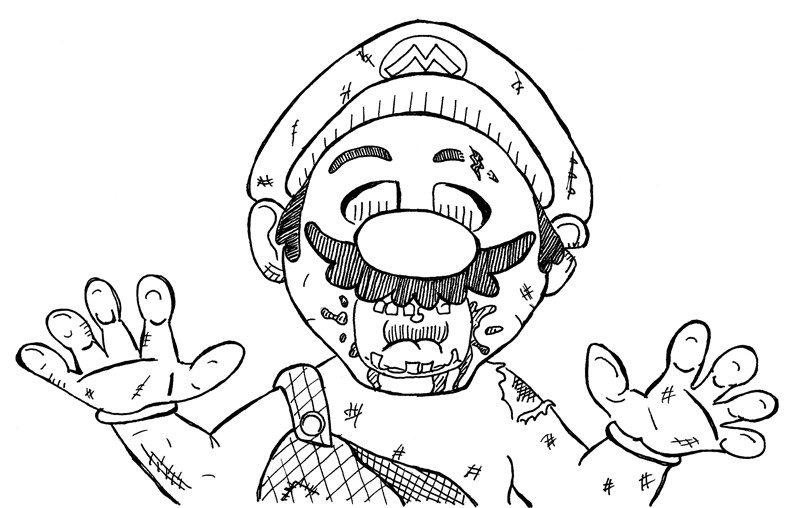 Video games are one of my favorite pastimes, whether I want to have fun with friends or wind down after a rough exam. With Halloween coming up, I’ve compiled a list of games to try out between the spooky parties and candy binges.

Make some popcorn, shut out the lights, put Spooky Scary Skeletons on repeat in the background, and pick up one of these games for your hair-raising Halloween pleasure.

The Nightjar is hands-down one of the coolest games I have ever played.

The Nightjar is a video game with no video. You are an unnamed passenger left behind by your crew as your spaceship slowly falls into a dying star. You have to find out how to escape in total darkness before your imminent death. The only tools you have are the ambience of your ship, the echo of your footsteps, and the voice of a stranger, voiced by acclaimed actor Benedict Cumberbatch.

The game uses awesome 3D audio technology to build an eery atmosphere using only sound. This makes for an intense, immersive environment. The game also has multiple endings, each with very different narratives, all of which can change your perspective of the game’s meaning in a heartbeat.

The reason this game is scary is that there are enemies you have to avoid only by your hearing. These monsters sound like they can definitely tear you to shreds. Sometimes the scariest things are the ones you can’t see.

Available for iPhone and iPad.

The Last of Us

The Last of Us brings emotional depth and eerily beautiful settings to the arguably played-out genre of post-apocalyptic survival games.

Playing as Joel, an old smuggler living in a world wrought with cannibalistic humans infected with a mutated fungus, you must escort the young survivor Ellie across the country to a group of rebels. These rebels, The Fireflies, plan on using Ellie’s immunity to the fungus to develop a cure.

The game was met with critical acclaim due to its deep narrative and storytelling abilities, immersive gameplay, beautiful visuals and sound design, as well as progressive and interesting depictions of female characters.

I absolutely loved this game. I felt so connected to and invested in every character, and I felt as though anything could be hiding around the corner. The game requires skill and stealth, and its pairing of both action-filled and sob-worthy cutscenes were a breath of fresh air in a market flooded with zombie apocalypse content.

This game is perfect for players who aren’t huge fans of jumpscares, as the game uses a suspense-filled atmospheric style of horror instead.

Available for PlayStation 3 and 4.

Anyone who’s even remotely video game savvy knows that any game in the Amnesia Collection is not necessarily a walk in the park.

Actually, it is literally a walk in the park. A terrifying, dark, bad trip in a murder-filled, hallucination-riddled psychological nightmare park.

Amnesia: The Dark Descent is a survival horror game that places you in the role of Daniel, a man who suddenly wakes up in the terrifying halls of Brennenburg Castle with no memory of his identity or past.

All he knows is that someone (or something) is hunting him.

The game throws monster after monster at poor Daniel, and since he has no weapons or any legitimate means of defending himself, he has to avoid, run and hide from any monster he sees.

The player must also manage Daniel’s sanity, as staying in the dark corners of the castle for too long will really take a toll on the protagonist, causing him to hallucinate and draw the attention of monsters.

The Amnesia Collection as a whole is riddled with jump-scares, difficult levels, a thick, terrifying environment as well as an interesting narrative just waiting to be unraveled and explained.

This game is not for the faint of heart, not in the slightest. Tread lightly down the castle’s bloodstained halls.

Available for PC/Mac and PlayStation 4.

Whenever I play a game that requires skill and stealth, I usually can fall back on the same few tactics that I know will work over and over again if I do them right.

That doesn’t work with this game.

Hello Neighbor, a stealth-based survival horror, requires you to sneak into your neighbor’s basement to uncover a “horrifying secret,” because isn’t that what good neighbors do?

You also have to break into his house multiple times to gather items necessary to access the basement.

Really what I’m discovering here is that you’re probably the bad guy, not the neighbor.

However, the game utilizes artificial intelligence to modify the neighbor’s behaviors based on the player’s past actions, such as changing his own route through the house and laying traps on the player’s previous path.

Hello Neighbor is currently available in its beta stage, and will be fully released on Dec. 8 2017.

Available for pre-order for PC and Xbox One.

If you aren’t really a jumpscare person, but want to get a just little spooky this Halloween season, I’ve got just the game for you.

Oxenfree is a single player, story-driven, supernatural mystery. In the game, players take on the role of Alex as she visits a local island with her friends. There, she must work to unravel the supernatural secrets of the island and save her friends from the ghosts of sailors long dead, who wish to return to their old lives by any means necessary.

What I really liked about this game was the art style and the dialogue. The entire game was very aesthetically pleasing, with cool, geometric and minimalist-esque elements. The dialogue feels natural and genuine, and the game gives you options of what to say. The player’s choices and relationships with all the interesting and unique characters determine which of the several possible endings the player experiences, which was a cool touch.

This game wasn’t terrifying, but the pairing of a cool narrative with wonderous, suspenseful cutscenes made for a really good time.

Available for Xbox One, PlayStation 4, iPhone/iPad and PC.

This game is really just an honorable mention, since you can’t play it anymore unless you have had it installed to your hard drive since 2015, when it was removed from the PlayStation Store. I tried to watch someone else play it, and had to stop watching about halfway. It’s pretty terrifying.

Despite a repetitive game type, the game never feels boring. That might be because PT happens to be the brainchild of genius director Guillermo del Toro and beloved game designer, screenwriter, director and producer Hideo Kojima.

Just put those two in the same room and something spooky will happen.

PT was originally created as an interactive trailer for the Silent Hill series, but after the game was suddenly cancelled, Konami, the game’s publishing group, had the trailer removed from the PlayStation store and deactivated player’s abilities to reinstall it.

Despite its mere year-long lifespan, PT is known as one of the best short-form horror games in the history of the genre. The atmosphere, psychological tension, quality jumpscares, cryptic narrative and puzzles make for a terrifying experience perfect for Halloweekend.

I highly recommend that you give watching this game a shot for a high-quality, intense scare.

By the looks of this list, it’s obvious that I am a huge sucker for games with deep narratives, and it doesn’t get much deeper than Bioshock– considering the game takes place 6877 feet under the ocean.

Sea what I did there?

In the first installment of the Bioshock series, you control Jack as you explore the deep-sea city of Rapture. Influenced by the Objectivist writing of Ayn Rand, the city, constructed in 1946, was meant to be business tycoon Andrew Ryan’s personal utopia where societal elitists could succeed without government control or oversight.

By 1960, when the game is set, the city had fallen into instability due to social and political turmoil as well as a sudden rise of addiction to Plasmids- a “super-serum” that gave users fantastical powers, but had devastating physical and mental side effects.

Jack explores the now-dystopic Rapture with the help of Atlas, a local who claims Andrew Ryan has taken Atlas’ wife and child.

There is so, so much more story to get into, and because of Bioshock’s deep emotional engagement, fun combat systems and a hugely explorable world, the game received high praise both from gamers and critics alike.

While the game isn’t classified as a horror game, the atmosphere of the game as a whole is so immersive and suspenseful that you’ll be on the edge of your seat with excitement and nervousness the entire time.