The art of lighting up 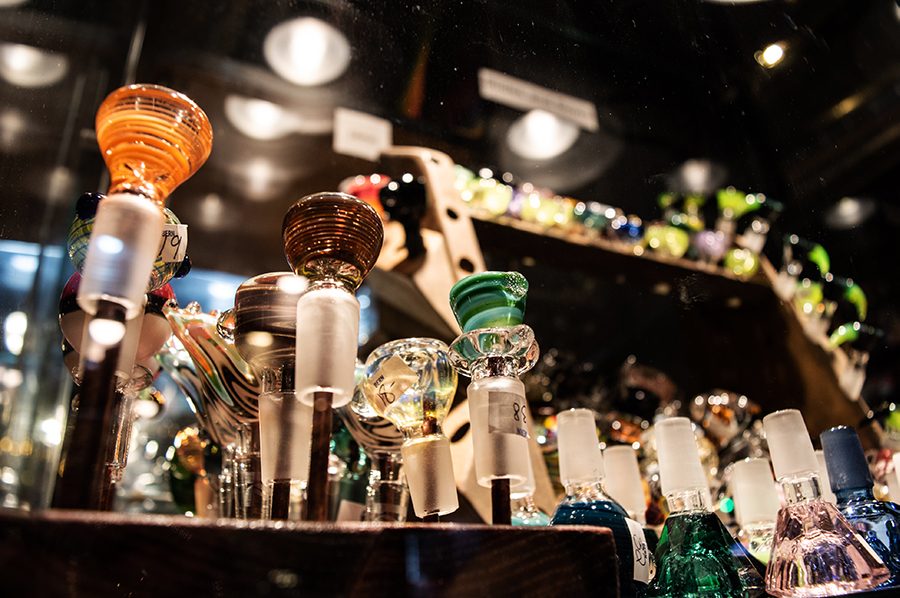 Bongs, hookahs and bowls of every color and style adorn the Bern Gallery, a local smoke shop on Main Street.

Large and artful pieces that can cost up to thousands of dollars sit near the front of the store. Glass gargoyles and dragons sit on display in the shop.

The Bern Gallery was opened in 2004 by CEO Tito Bern.

“When I was in high school, there was no glass,” Bern said. “We just smoked out of wood pipes. They weren’t even carved, they were mass produced wood pipes.”

Bern started blowing glass in 1999, and his introduction to glassblowing was part of the initial wave of popularity for the craft, Bern said.

The time it takes to create a finished bong can vary, Bern said.

He saw a piece that only took forty seconds to make, and he’s worked on glass that took two months to finish.

“The art part of it is how long do you want to spend on it? You could spend a lifetime on one piece if you wanted to,” Bern said.

A piece can only be worked on for about 60 seconds before it has to be put back into the kiln. If it’s out any longer, stress points can cause the glass to be damaged, he said.

“Once a piece is finished and everything’s melted in, there shouldn’t be any hard edges, 90-degree angles, inward divots, there’s certain things that come off as a flaw,” Bern said. “All of that quality control is within the artist.”

While glassblowers and pipe makers see their work as an art, college students who buy their work don’t always see the artistic side of a piece’s production.

One sophomore said a bong is more about utility and how quickly it can get him high.

“It wouldn’t have to look that nice, as long as it does the job,” he said. “It’s like designer clothing.”

While the appearance of a pipe or bong doesn’t matter for many college students, the sophomore still appreciates a nice looking piece.

The student said that his first piece was cheap, but nice-looking.

“It was blue and yellow, but when it would heat up, the yellow would turn red,” he said.

Another sophomore said he appreciates how a piece looks, but it isn’t the first thing he considers when buying a piece.

“I’d like to smoke out of one of those cool dragon pieces,” he said. “Colored glass looks really cool, like when they make it cloudy, I love that.”