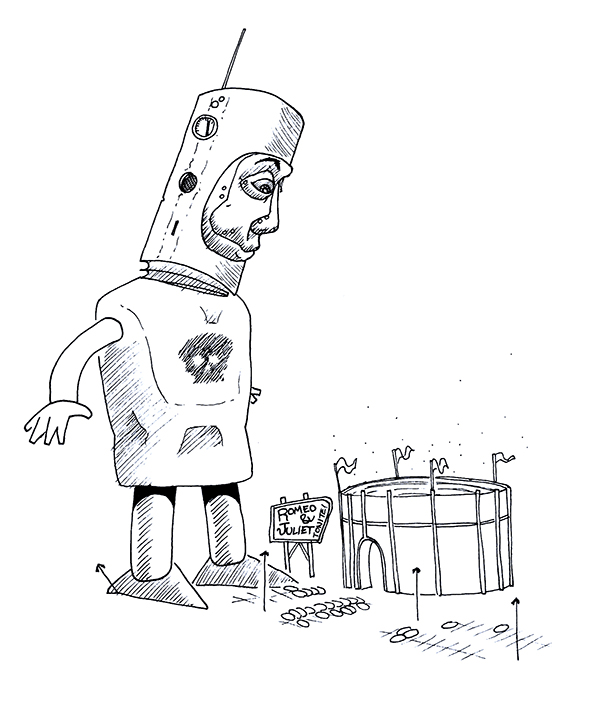 There are not many corners of the entertainment industry where you can find intelligent yogurt, living piles of garbage, ancient hallucinogenic fish, cyborg gangs and a healthy dose of nihilism all wrapped up neatly into one series.

However, in a recent short form, mostly animated series, Netflix has collected all that and more into “Love, Death & Robots.”

The anthology has 18 episodes, 16 of which were adapted from short stories, and displays Netflix’s unabashed willingness to push into the bizarre–with episodes that vary greatly in their animation and narrative styles.

However, in a series that has as much variety between episodes as this one has, there’s bound to be some that miss the mark. And believe me, a few miss it by miles.

With another season on Netflix’s horizon, let’s take a spoiler-free look at a breakdown of the episodes from this season that are good, bad and just plain meh.

Just as most of the series’ episodes center around grim topics, this one does so with just the right amount of absurdity.

“Three Robots” follows a group of three robot tourists as they experience the sights and sounds of a post-apocalyptic Earth, not a place that most would consider prime vacation material.

Though the aftermath of the collapse of human life makes for a bleak setting, the banter between the characters that comes from what they think human life consisted of makes for some of the best moments of the series.

I found that the rest of the comedic episodes in “Love, Death & Robots” struggled to keep up with the narrative capabilities of the darker episodes, but with a compelling mix of somber and silly, this episode has earned its place as one of my favorites.

I’m not really one to get pulled into the throes of a plot twist. This episode, however, threw me for the wildest loop, and is hands down my favorite of the series.

The story of Sonnie, an up-and-coming fighter in a grotesque and jaw-droppingly violent arena where contenders battle via genetically engineered monsters, is compelling, action-packed, and just as brutal as you’d expect.

The depth with which viewers are thrust into the dystopian society surrounding the arena is breathtaking, which in contrast makes the distance that the short keeps between the viewer and Sonnie’s backstory all the more intriguing.

With that in mind, the story’s ending in and of itself is the most satisfying revenge story on Netflix.

This episode is one of two that wasn’t based on an existing short story and is definitely the better of the two.

“Blindspot” shakes up the slower pacing of some of its preceding episodes with wild, trainwreck levels of fun as it follows a ragtag group of cyborg thieves who attempt to rob a high-tech convoy.

The plot is simple enough, but what makes this episode work so well, other than its visually engaging style, is the compelling character design as well as the manner in which the different characters interact.

I mentioned that the funny episodes struggled to keep up with the darker ones, but the memorable characters and the vibrant art style really help this short to stand out, and the larger than life personalities of the team make the stakes of the heist all the more impactful.

It’s quite fitting that this episode is about a pile of garbage. I really tried to give this episode a chance, but even five minutes in I was pretty sure it would be my least favorite. Lo and behold, it is.

The story, which shows an old man explaining why he can’t leave his home at the request of a city inspector, is hokey and falls flat in comparison to the rest of the episodes, and is probably the only one on this side of the review that really deserves a skip.

Despite what is definitely an original way to write werewolves into a plot, which consists of a pair of werewolves who serve alongside judgemental soldiers in the Afghanistan war, “Shape-Shifters” leaves a lot to be desired.

This episode is probably the least visually interesting of the photorealistic episodes, and it falls far behind the narrative prowess of others. If you decide to skip, all you’ll miss is some nudity and anti-wolf prejudice.

Beyond the Aquila Rift

Though this episode isn’t the worst of the series, it was certainly the most disappointing.

In another of many beautifully photorealistic romps, the story of a spaceship’s crew who traveled light-years off course had several moments of genuine emotion and amazing cinematography that, in theory, should have bumped it onto the good episodes list.

And don’t get me wrong, this episode does an amazing job of adapting my own personal nightmare of the unending and uncaring void of outer space and all of its possible horrors into a mostly well-paced exploration of whether or not what’s happening around us at any given moment is real.

However, what could be one of the best plot twists in the series was dampened by a wicked long sex scene right in the middle. Any and all momentum the story had screeched to a halt for a gratuitous interlude of sex that tries very, very hard to get itself out of the uncanny valley to little avail.

When The Yogurt Took Over

This was the first “Love Death & Robots” episode I saw, and to be honest, if it hadn’t been one in the morning and if I hadn’t been too tired to spend another hour looking for something else to watch, I probably would have skipped to something else on Netflix.

It’s not bad, as none of the “meh” episodes are, but it was a weird introduction, and I wish the series kicked off with something else. I honestly thought that I’d clicked on the wrong show after watching the trailer.

On the plus side, this episode is the shortest of the series, which is probably for the better as I don’t think its punchy comedic style would work if it were any longer.

This episode’s placement is the one I’m most torn on.

While the story of the famous yet isolated artist Zima is unlike any of the other episodes in its thought-provoking take on existence, it’s also just… odd.

The pacing is slow and methodical, which was almost a very-nearly unwelcome change of pace coming right after “Blindspot.”

It’s ambitious, I’ll give it that, and the stylized animation is unlike anything I saw in the other episodes, but the harsh downshift from the mood and content of the other episodes did this episode’s standings more harm than good in my opinion.

As the second of the two original works in the series, the story of a woman running for her life after witnessing a brutal murder features a brilliant and unique art style at best but doesn’t offer much plot-wise.

While the plot twist does garner some interest, which mostly consists of the main character running and screaming, it almost feels like it’s too little, too late.

It’s disappointing that an art style as vibrant as this episode’s is set against a plot that doesn’t consist of anything as interesting.

What we see of the episode’s world is vividly beautiful and down to every last detail, but the pacing in which we see it is so frantic that I spent more time watching the background than the events of the short, which as I said, mostly consists of running and screaming.