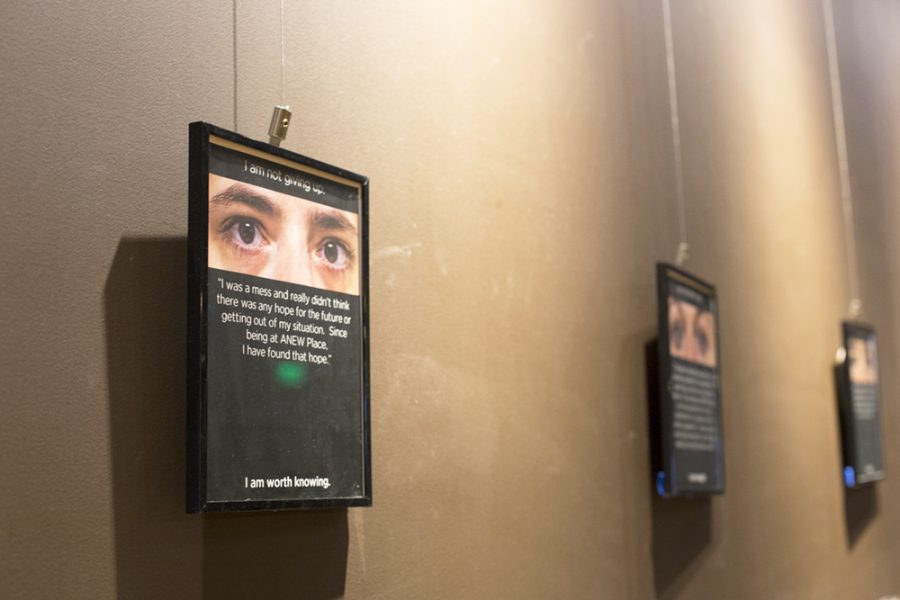 One local homeless shelter is attempting to change the community’s perception of homelessness.

ANEW Place, a homeless shelter that has served Burlington for the past 34 years, is telling the stories of their guests through their #IAmMoreThanHomeless project, which is currently on display at New Moon Cafe on Cherry Street.

The project consists of photographs of the guests’ eyes, featuring a small description of their journey through homelessness.

Above a photograph of a woman’s bright blue eyes, bold white lettering reads, “I do not lack determination.” Underneath, her story unfolds: “I was a homeless, single mother struggling to maintain housing and a job. Since being at ANEW Place, I work two full-time jobs and am working on getting my own place to be a positive role model for my daughter.” Finally, she proclaims, “I am brave.”

“It’s a continuation of a campaign we did last fall,” said Michelle Omo, development and marketing director for ANEW Place. “We wanted to continue the campaign to chip away at the stereotype: what people in the community think homelessness is, or homeless people are.”

Vermont has the highest rate of homelessness in New England, but ANEW Place aims to change the face behind homelessness statistics and stereotypes.

“There’s a lot of misconceptions and assumptions about that population,” Omo said. “Homeless may be their current circumstance, but certainly not their identity.”

She said the shelter hoped to capture the stories of their guests in order to challenge the assumptions and misconceptions surrounding homeless- ness.

“In doing [this project], our guests don’t really want to be the face of homelessness,” Omo said. “And they’re in really fragile transitions in their life, and we had to work around that anonymity a little, so we decided to capture their eyes.”

“Their eyes paint a clearer story than an entire face photograph could,” sophomore Alison Gottsegen said.

At a first glance, the exhibit in New Moon could seem like a Humans of New York-style project. In reality, the project’s photographic and storytelling qualities were the result of a large staff effort.

“Between our case manager asking them for permission, our program director setting up the camera, different people taking their pictures, to all of us gathering their stories, to our outreach coordinator creator creating the graphics, we had all hands on deck,” Omo said.

Homelessness awareness through #IAmMoreThanHo- meless doesn’t stop at New Moon. The team at ANEW Place is hosting “ANEW Story Night” at The Old Lantern Inn and Barn in Charlotte, Vermont May 12. Two current and two former guests of the shelter will share a video series featuring their journey through homelessness.