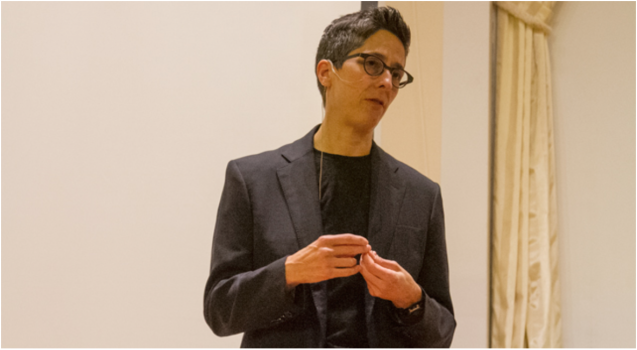 The best book of 2006 wasn’t a book in the traditional sense, but a graphic novel called “Fun Home,” according to Time Magazine.

“Fun Home” author and illustrator Alison Bechdel spoke about her life and work at the Ira Allen Chapel Nov. 13.

The Cynic sat down with Bechdel to talk about comic books, stamp collecting and deep-seated Freudian psychodrama.

The Vermont Cynic (VC): Who are Edward Gorey and Charles Adams?

Gorey is kind of hard to categorize. He was a book designer, but he did some very funny illustrated books of his own; a lot of very macabre, ghoulish, creepy stories.

Most people know him from the “Gashlycrumb Tinies,” this alphabet book about little children who die in different, awful ways.

VC: I just finished “Fun Home” last night and it was, well, not a very fun home.

It’s a very sad book! What was the experience of writing that like?

AB: [Laughs] It was pretty intense. It’s a very important story for me, one that I’d wanted to tell for a long time.

I didn’t really sit down to begin it until I was almost 40, and it took me like seven years to figure out how to tell that very personal, painful story.

VC: You’d described it once as very meta-project — a memoir about writing a memoir. Can you elaborate on that?

AB: I was probably talking about the book I wrote after that, “Are You My Mother,” which was actually a book about writing “Fun Home.”

It was such a big experience, confronting my mother about the fact that I was going to reveal this family secret about my dad.

So that’s a little meta.

VC: Speaking of your relationship with your parents, when did you become so interested in Sigmund Freud?

AB: Freud wasn’t really read when I was in college.

He’d fallen out of fashion.

People thought he was just sexist and all that kind of stuff, but I found his ideas really relatable growing up in this family with weird gender and sexual issues.

Everybody in my family liked men. My mother liked men and my father liked men, and it was a confusing situation for a little girl.

VC: I don’t know if this is strictly Freudian, but let’s do some word associations.

VC: Do you have a least favorite comic strip in print right now?

AB: [Laughs] You know, I stopped reading the newspaper comics, it’s really sad, I used to love them.

I used to love to hate “Cathy” but of course that’s not in print.

But yeah, “Buckles” runs in the [Burlington] Free Press, and I dislike it heartily.