The Vermont Cynic • May 31, 2019 • https://vtcynic.com/culture/concerts-art-shows-coming-to-burlington-this-fall/ 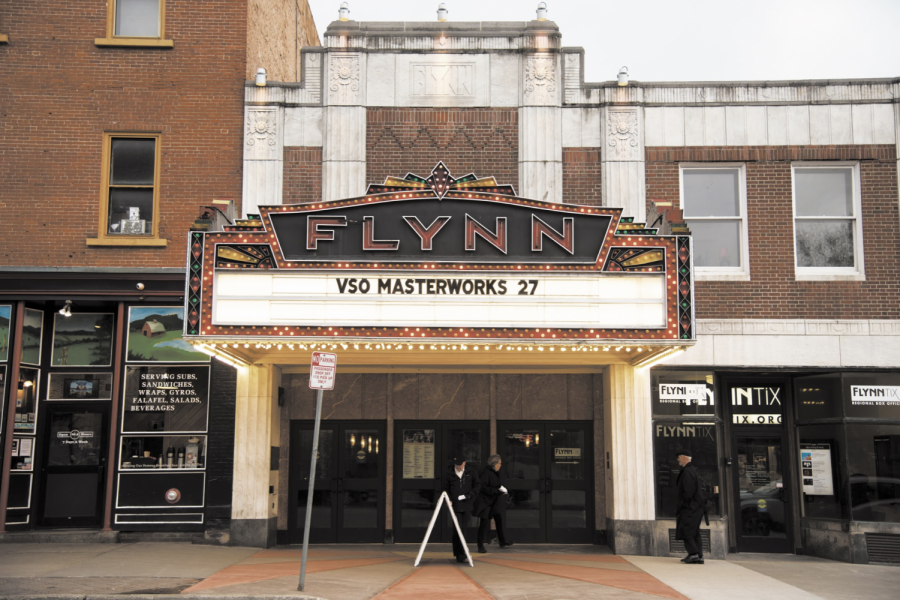 The sign of the Flynn Center for the Performing Arts on Main Street advertises the show,”VSO Masterworks” April 27. If you enjoy classical music, Paddy Reagan, the talent buyer for ArtsRiot, suggests checking out the Vermont Symphony Orchestra, who play at the Flynn.

With fall semester approaching, it can be overwhelming finding the best places to go for fun, music and entertainment.

That’s why this preview of fall events is the best way to plan out what will be happening in Burlington.

Paddy Reagan, the talent buyer for ArtsRiot, a music venue on Pine Street, discussed the various events that will be taking place in Burlington in the fall. He talked about the booking process and how a big part of it is based on availability and personal tastes.

“If it’s bands, a lot of that is based on who is available,” Reagan said. “Who is routing through the area and who can perform at a 300-person venue.”

Reagan also said he collaborates with other people to determine who comes to ArtsRiot.

Rob Liu is the profession manager at ArtsRiot, and Reagan said that he and Liu manage events and decide who comes to perform.

“We go off our own tastes, and our decision is based on what we think is worthy of the platform ArtsRiot can provide and what we think will help enrich the music scene in Burlington,” Reagan said.

They also try to bring in music people in the Burlington community would enjoy, even if they don’t fit his and Lou’s tastes.

“A lot of the shows we already have booked are not yet announced,” Reagan said. “Most of them will be announced and go on sale at the end of this month or sometime in June or July.”

Reagan recommended to stay alert for a Halloween show and said there would be an event the week before called Salvation Farms Aid, which is a take on the fundraiser and music festival Farm Aid. He also hinted that November 11 to November 16 would be a big week of  really great shows.

Additionally, Reagan said ArtsRiot student bands also have the potential to make it to the mainstage.

“We hold a college showcase every year, so if you have a band, that’s a great way to get on the ArtsRiot stage and potentially play at the Waking Windows festival,” Reagan said.

In addition to ArtsRiot, Reagan also said the big kickoff event of the season will be South End Art Hop. According to Reagan, Art Hop is a giant celebration of art and music that happens every year.

Reagan also recommended checking out smaller music venues in town like the RadioBean or the Monkey House in Winooski.

Sophomore Emma Parks said that RadioBean is one of her go-to spots for live music.

“I love going to RadioBean. A couple of my friends have played there, and it’s always awesome to see them perform,” Parks said. “The venue is really intimate, and you get to see a lot of fantastic music for free that you may not normally see.”

However, if rock or punk music is not your favorite style, Reagan suggest checking out the Vermont Symphony Orchestra, who play at the downtown Flynn Center for the Performing Arts.

Overall, the entertainment  scene in Burlington offers plenty of different options to choose from. Reagan advised to go to something unfamiliar and to reach out of your comfort zone.