Flower show brings the outdoors in 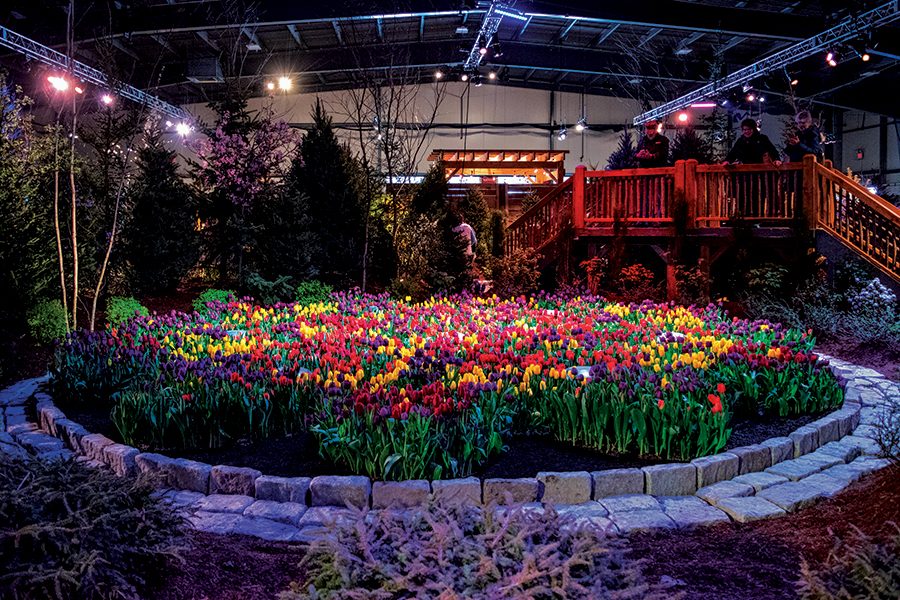 A large flower display inside the Champlain Valley Exposition. From March 1 to 3, the Vermont Flower Show displayed intricate landscaping creations to the public, along with hosting many landscaping vendors.

The Vermont Flower Show took over the Champlain Valley Exposition Center from March 1 to 3 and boasted a variety of vendors and flower displays.

The Vermont Nursery & Landscape Association has hosted flower shows since the organization’s inception in 1964, according to its website.

The show began in the north exhibit hall, where the grand garden display was being held. Patrons walked through a pathway of natural and floral designs, stopping to take photos of the various sets.

The first couple of designs consisted of small houses with an outdoor sitting area, coupled with a garden of flowers that were labeled with their names.

Patrons were encouraged to touch and smell the different plants.

The show boasted over 1,000 perennials, more than 400 trees and shrubs and 450 bales of peat moss, according to the show’s website.

Sophomore Paloma Wallace said she enjoyed the way everything was carefully set up, all of the details and the effort that went into creating such a large exhibit.

“I liked the set up because everything seemed perfectly calculated, from the choice of colored lights to the little succulents scattered around the dirt,” Wallace said.

Wallace also added that her favorite part of the pathway was the maze at the end and how it was made to be interactive.

“I loved the section at the end where you touch and smell different flowers and textures from nature,” Wallace said. “It was kind of like sensory overload, but in the best way.”

After the garden display, patrons went into the exhibition hall to browse over 90 vendors and take part in what they offered. While Full Circle Gardens offered DIY succulent kits, the Flower Market had fresh bouquets for sale.

Junior Katie Moses said she liked the different vendors that came to the exhibition.

“I really liked how there was everything from making your own succulents to beekeeping to books about how to start your own garden,” Moses said. “The variety was awesome, and really kept me interested the entire time.”

Moses also said that she liked the different kinds of local food that were offered and was impressed with everything she sampled.

“I got chocolate raspberry ice cream from a creamery that had a stand, and it was super creamy and delicious,” Moses said.

In addition to the long list of vendors, the expo continued into the blue ribbon pavilion and held even more events for families and patrons.

The family activity room held arts and crafts, live music, and dancing for families with young children, while the next door room had workshops about garden care.

Sophomore Becca Turley said that one of her favorite parts was the art gallery that was located next to the workshops.

“I thought that the art gallery was beautiful and showcased a lot of really great paintings and photographs,” Turley said. “I was really impressed by the level of talent and thought it really added to what the Flower Show had to offer.”