New ‘disorder’ is eating away at students 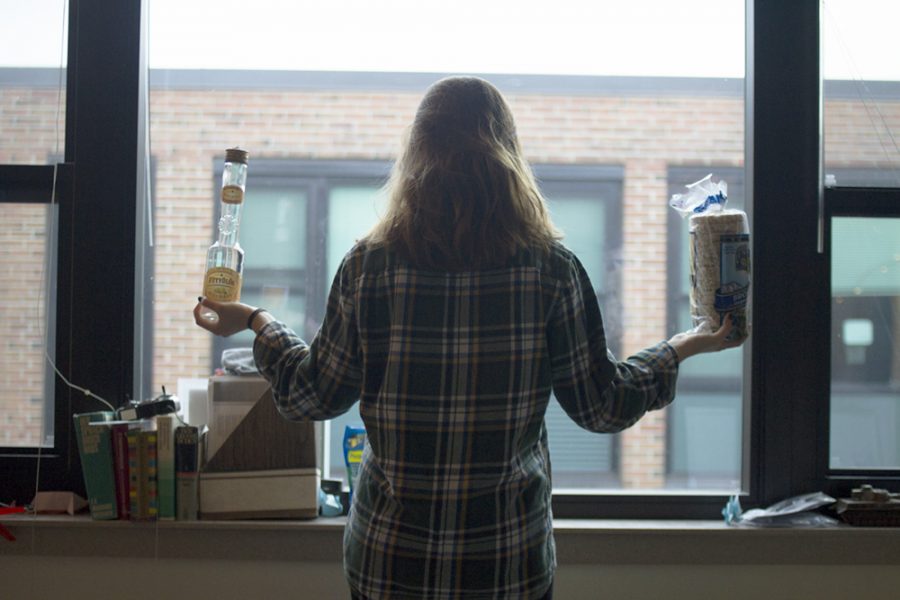 It’s Friday night at the dining hall; there’s a line at the pasta station where students are filling up for a long night. It’s no myth that eating a well-balanced meal before drinking can be a big factor in how the night and the next day turn out.

However, according to the University of Texas health services, not everyone chooses to fill up before going out.

“Drunkorexia” is “a slang, non-medical term that refers to someone who restricts food calories to make room for alcoholic drink calories,” according to the University of Texas. “Others may purge their food and alcoholic drink to avoid the calories.”

More specifically, “drunkorexic” behaviors stem from the fear of weight gain from alcohol.

Junior Sierra Matika said she had never heard of the term before but “realized that it’s the thing they warned us about the first weekend of school freshman year.”

An article published in Psychology Today Oct. 7, 2013 stated, “Recent studies have shown that 30 percent of women between the ages of 18 and 23 have skipped a meal in order to drink more.”

Other risks that come with drunkorexia, other than getting too drunk too quickly, include malnourishment, binge-eating behavior due to the binge-purge cycle and can also trigger eating disorders and/or alcoholism, according to the article.

Junior Sam Woolfolk is one student who agrees that this new habit is a dangerous one, and knows what to eat before a night out.

Although he doesn’t pay close attention to what he is eating, he “might choose something basic, something that won’t upset my stomach later such as pasta or a grilled cheese,” Woolfolk said.

“I’ve never willingly chosen not to eat before going out because I know I’ll get intoxicated faster or easier,” he said.

Although it is not formally considered a disorder, some students think this could be an issue at UVM that has not yet been addressed.

“I wouldn’t be surprised if people at UVM use such a harmful method of getting drunk,” Woolfolk said.

“This is most likely how people with anorexia drink, which is sad, really,” he said. “I know binge drinking is unhealthy but drunkorexia has taken something that is generally fun and that brings people together and has made it selfish and more damaging.”

We live in nation whose weight-loss industry is worth around twenty billion dollars, according to  ABC News.  Due to the obsession the U.S has with dieting and looking a certain way, this could lead to an array of widespread body image issues that affect different age groups.

“If you’re drinking with some friends and you haven’t had anything to eat, you’re probably going to vomit because there’s a bunch of unabsorbed alcohol sitting in your stomach,” Woolfolk said.

“But throwing up, unfortunately, is so common when college students drink because we tend to binge drink,” he said.

Since drunkorexia is a newly-named habit, there is not much awareness or public information available.

“I think awareness is important regardless of whether it’s considered a disorder or not,” Matika said.

However, Annie Valentine, a health educator at LivingWell, doesn’t agree with the naming of this habit due to the current lack of research.

She said she and the University are aware that these two habits are a prevalent issue on campus and want to emphasize that there are many resources for those who struggle with either of these issues.

“There is a program called BASICS which offers a screening directed mostly to students with alcohol violations, and it is here to help students understand their relationship with substances in a judgment-free environment,” Valentine said.

“There are also plenty of resources and programs for those dealing with eating disorders,” she said.