The Vermont Cynic • May 7, 2016 • https://vtcynic.com/culture/life/bathroom-laws-ignite-activism/ 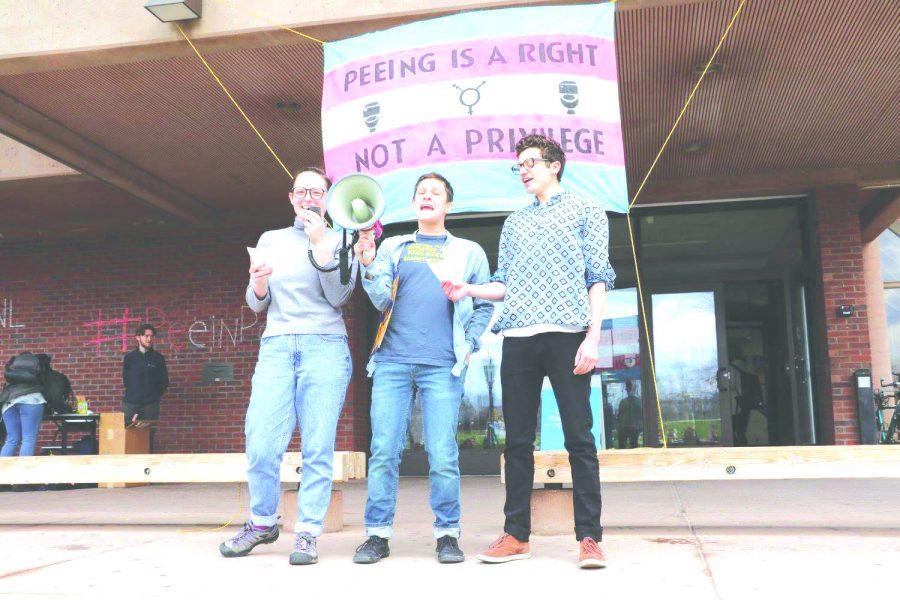 On April 22, students gathered outside the Bailey/Howe Library, armed with megaphones and signs declaring “peeing is a right, not a privilege” and “#peeinpeace.”

The issue of gender identity has been the subject of nationwide debate in recent weeks, sparking activism on campus.

This occurred after North Carolina passed a law  in March prohibiting transgender individuals from using bathrooms that do not match their biological birth sex, according to the Public Facilities, Privacy and Security Act.

Junior Lindsey McCarron organized the rally to protest the absence of all-gender bathrooms in the library and express solidarity with those affected by this recent law.

The protesters’ primary demand was the designation of two “all-gender” bathrooms on each floor of Bailey/Howe, McCarron said.

McCarron said she prefers the term “all-gender” rather than “gender-neutral” because it doesn’t separate trans, queer, nonbinary or agender students from the general population.

She further announced the creation of a task force that will review the protesters’ demands and attempt to make changes by the end of this spring, as well as more long-term changes encompassing gender identity.

“At this time, multi-stall all-gender bathrooms are on the rise in the United States, and I believe they will become more common here before long,” said Dot Brauer, director of the LGBTQA Center on campus.

McCarron drew up a proposal for all-gender bathrooms in the library, which they said received more than 1,000 signatures of support.

“This is a demand,” McCarron said. “This is an immediate and real need that is affecting people’s health and safety every day.”

Protesters also took their stack of petitions, cut them to  the same size as toilet paper and presented them to Dean of Libraries Mara Saule, McCarron said.

“The dean of libraries responded by saying that when they do construction in 2017, there will be one more gender-neutral bathroom built in the library … but that’s so far away and it’s only one more,” McCarron said.

“[This] affects me as both a dean and a human,” Saule said.

“One of my frustrations is there doesn’t seem to be a University-wide approach to toilets,” she said. “There must be a standard for this. There needs to be an institutional context here.”

“I believe we should have more all-gender restrooms, rather than that pitiful one on the ground floor, and we plan to put up directional signs to lead people to them by the end of this year,” Saule said.

This is not the first discussion UVM has had about gender. In 2003, Bailey/Howe didn’t have any unisex signs – the two side-by-side figures in pants and a skirt – on single occupancy restrooms, Brauer said.

More than 40 signs were added over the summer, “which dramatically increased trans students’ safety and comfort on campus when they returned in the fall,” they said.

The University also made national headlines again when it decided to recognize gender identities other than male and female.

“Adding gender-neutral options to the University of Vermont’s information system took nearly a decade of lobbying, the creation of a task force of students, faculty members and administrators, and six months and $80,000 in staff time to create a software patch,” according to a Feb. 3, 2015 New York Times article.

Students involved in the “pee in peace” movement are not asking for construction, McCarron said, but new non-gendered signs on the bathroom doors.

“It’s just a matter of changing signs, so money cannot be a valid argument,” McCarron said.

The sign should not show the gendered figures, but only the image of a toilet, they said.

“Going to the bathroom should have nothing to do with your assigned sex, gender identity or expression, which is why we want to stop gendering bathrooms altogether,” McCarron said.

On a daily basis, students who don’t identify as male or female go to tremendous lengths to use the bathroom.

Many students will have to leave a building to go to another location that has a gender-neutral bathroom, which takes time out of their classes, McCarron said.

Others may resort to extreme and unsafe measures.

“Some will drink or eat less to avoid having to use the bathroom,” McCarron said. “It becomes a serious health risk when students are malnourished or are getting urinary tract infections from holding their bladder.”

During “all-night study,” students do not have access to gender-neutral bathrooms in Bailey/Howe and cannot go to the Davis Center because it locks at midnight.

“I want trans and queer students to be able to study all night in the Cyber Cafe just like everyone else, but there are only single-gendered bathrooms there,” McCarron said.

“We need to keep re-evaluating and making change; there is always room for improvement,” McCarron said.

Brauer is hopeful UVM will answer this call for equality soon.

“It will take people a little while to adjust, but ultimately, humans are really good at adapting to change, especially when we understand there is an important reason behind a change,” Brauer said.