When audience members stepped inside the new building they saw colorful lights and tech equipment around them. The voices of art students whispered with excitement and faculty gathered in circles talking eagerly with each other.

Michele and Martin Cohen Hall, an integrated arts building on the corner of South Williams Street and Pearl Street, opened with a special event Oct. 3. 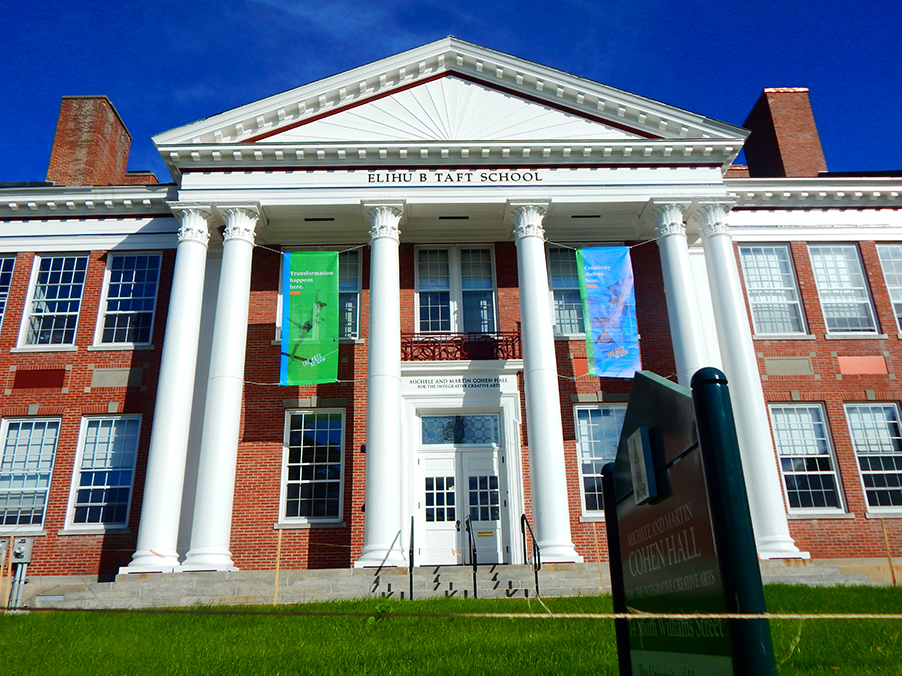 The audience formed a semi-circle in front of the stage as attention turned to art history professor Kelley Di Dio, associate dean of the College of Arts and Sciences and overseer of the Cohen Hall renovation.

The process of renovation Cohen Hall started approximately 5 years ago when Michele and Martin Cohen gifted the College $7 million dollars. The first gift was $2 million, the second $3 million, and then another $2 million, Di Dio said.

Michele Cohen, a UVM alum ’72, who has been a huge advocate for the arts throughout her life, wanted to make Cohen Hall a reality for the hard-working and passionate arts faculty and students. Her dream is to enable the faculty and their students to create and present their phenomenal work to the UVM and Burlington community, Di Dio said.

Di Dio said the first crucial step was figuring out how to renovate and use the space. Di Dio reached out to the faculty and collaborated with a local architect firm, Scott and Partners, who interviewed faculty about their individual goals and needs.

“From there, they devised the master plan for Cohen Hall,” said Di Dio.

“Cohen Hall would never have happened without [him],” she said.

Shane Jacobson, CEO and president of the UVM Foundation and Alumni association, announced at the concert that the Cohens were so pleased to donate an extra $2 million to further improve Cohen Hall.

“Our vision is that everyone will be in [Cohen Hall] and … the dollars gifted to us will allow [us to include and integrate] the digital arts, music theater and more … and that’s my dream,” Di Dio said.

Music Professor Patricia Julien said what excites her most is the new opportunity Cohen Hall brings to innovate and be creative in an integrated manner.

“I get so teary-eyed about that because I think it’s so important to cross paths with one another in other disciplines and brainstorm and see the other work that people do,” she said. “I think it’s really enriching to have a space whose purpose is to help make that happen.”

While the faculty is more aware of Cohen Hall and what it will provide, music students are still learning and figuring out if they will use the space or not.

Junior Jack Snyder, a music education major and jazz vocalist, said he was not sure how Cohen Hall would impact his education.

“I didn’t know about it leading up to the event. I haven’t really thought about any possibilities but it would be cool to use the space,” he said.

Snyder was nonetheless optimistic and hopeful.

“I think the way it was transformed from a gym space into what it was for that performance was pretty awesome to see. So, I thought the performance space was nice and to have a space that large with the lighting really spruced it up,” he said.

Sophomore Chloe Schafer, a dance and anthropology major, plans to use Cohen Hall with her peers in the dance department.

“We are further developing a duet we originally created in Dance Composition for a showcase later this semester,” she said. “I know as I continue down this path of composing dance pieces, Cohen will become a huge part of my movement process.”

Schafer said she thinks the new building allows for the arts to be taken more seriously on campus. Cohen Hall will function as “center or core” of the arts at UVM, where “everyone and anyone can come to appreciate and participate in artistic endeavors,” she said.