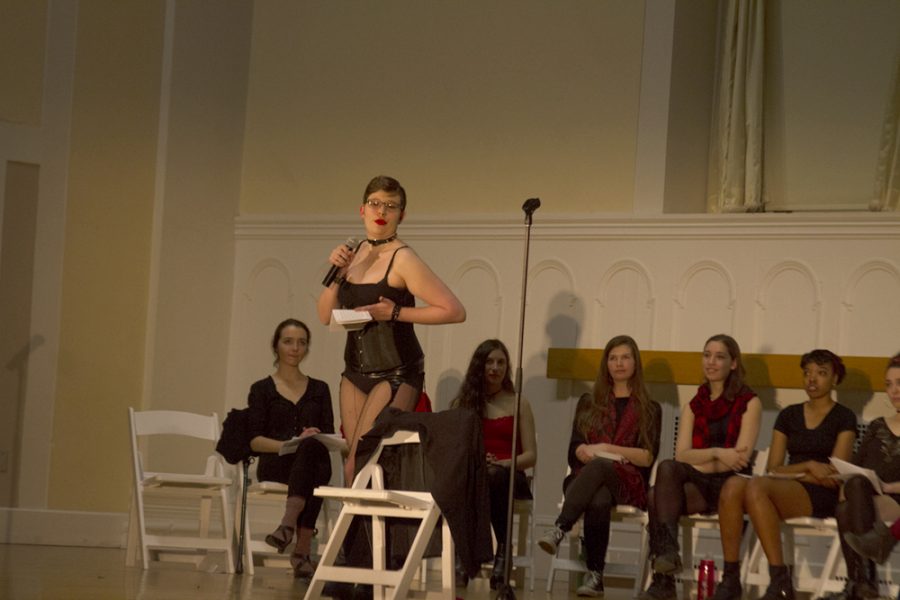 Rosa Cirelli acts out their skit at the annual rendition of “The Vagina Monologues” April 15. C.U.N.T.S. sponsored the event. OLIVER POMAZI/The Vermont Cynic

Taboo topics don’t always have a space to be discussed, but Eve Ensler has created a place where we can speak about the unspoken: vaginas.

Ensler’s play has become a phenomenon taken on by many colleges, including UVM’s College Undergraduates Not Tolerating Sexism, who have been performing the show for years.

“The Vagina Monologues” is a collection of more than 200 different female voices, who Ensler interviewed to talk about their experiences with their vaginas.

The show began by announcing this edition of “The Vagina Monologues” was expanded to make it more inclusive to involve anyone who identifies as a woman.

“The show creates a safe place for people with vaginas to talk about things they can relate to and can’t talk about in other settings,” they said.

“When you’re taught not to talk about things like your period, this empowers people to talk about these type of experiences,” sophomore Stevie Hunter said. “It opens up cross-generation conversations.”

“The show’s purposes are to raise awareness on sexual violence, enable people to express their experiences and accepting a variety of experiences,” she said.

“I’ve never loved my vagina more,” sophomore Sage Ryan said. “This taught me to appreciate the things society teaches you to hate.”

“The show combats stigmas about womanhood,” she said. “It’s a space to talk about things openly.” Ryan said it’s raw, pure and real.

The show cost $5 and all proceeds went to HOPE Works, a rape crisis center that “aims to provide counseling and advocacy for those those whose lives have been affected by sexual violence,” according to their website.

Cirelli explained that HOPE was chosen because it relates to the show’s purpose in preventing sexual violence.