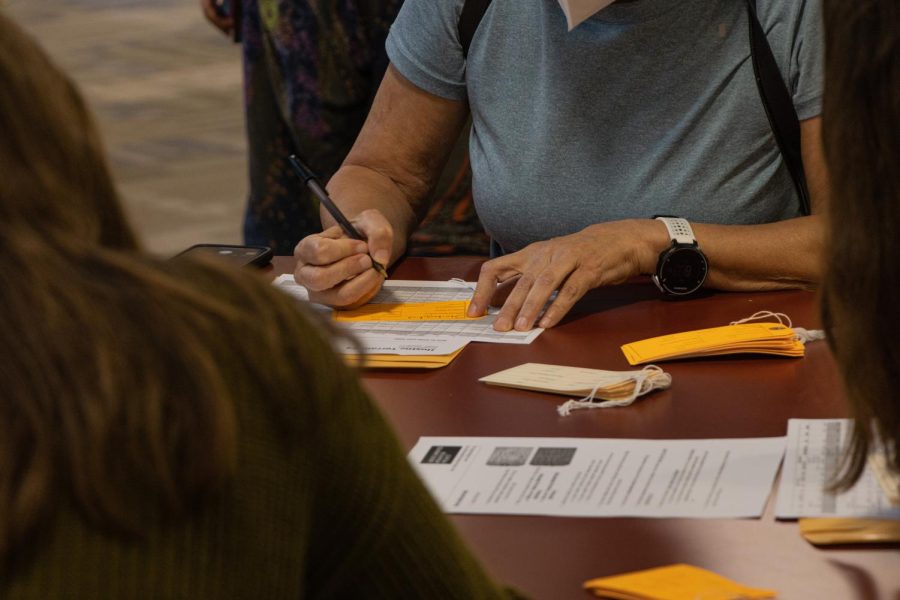 Attendees fill out tags that list names of individuals who lost their lives trying to cross into the U.S. through the Sonoran Desert on the southern border of Arizona.

Thousands of toe-tags hanging on a map represent lost human lives and bring attention to an ongoing humanitarian crisis.

“Hostile Terrain 94” displays the violence involved in the migration process between Latin America and the U.S.

Participants fill out blank toe-tags with information collected by the Pima County Office of the Medical Examiner. They pin the toe-tags on a map of the Sonoran Desert on the southern border of Arizona.

The Undocumented Migration Project started the project in 2009 to bring awareness to the largely misunderstood and controversial process that is border crossing, according to their website.

Anthropology professor Teresa Mares worked with students to bring this exhibit to life.

“In the next couple weeks people will fill out tags of remains that have been found in the desert,” she said. “This includes names, ages and the condition that they were found in.”

Only 3,400 toe-tags will be placed on the map by participants, which is a gross undercount, Mares said. Some estimates place the number of remains found in the desert between 10,000 and 15,000.

Participants can share their feelings about the exhibit on the back of the map.

“I feel a pit in my stomach and immense empathy,” one note stated. “I need the U.S. to do better.”

The U.S. implemented policies known as Prevention Through Deterrence in 1994 to deter undocumented migrants from crossing the U.S.-Mexico border, according to an Oct. 4 press release published by VT Digger.

“Often border patrol relies on the deadly environment of the desert to discourage people from migration,” Mares said. “These policies were implemented in 1994 and persist to this day under both democratic and republican presidents.”

Junior Hannah Fletcher helped organize the exhibit. She said Prevention Through Deterrence should not be a polarizing issue, and partisanship is distracting from the violence on the border, which is decades old and government sanctioned.

“People are dying, and the U.S. is directly involved,” Fletcher said.

Fletcher said “Hostile Terrain 94” encourages the audience to realize many of the migrants who cross into the U.S. could live in anyone’s neighborhood.

“These policies are not on our radar and many of us are not informed of what is happening,” Fletcher said.

The physical action of writing down the information of deceased migrants on to paper and seeing it on a map has an emotional impact, said Amelia Coates, senior and Mares’ teaching assistant.

“Nearly half the tags to be filled out are unidentified people,” she said. “Many of their families have no idea what happened to them and don’t have any closure. It creates a very emotional connection.”

The “Hostile Terrain 94” exhibit should inspire participants to advocate for change, Coates said.

“Some of the major takeaways that we want people to have is pushing them to action,” Coates said. “I want people to reflect on the institutions and the ways that our society has created this issue.”

The “Hostile Terrain 94” exhibit is open until Nov. 4 and is located in the Fletcher Free Library on College Street.