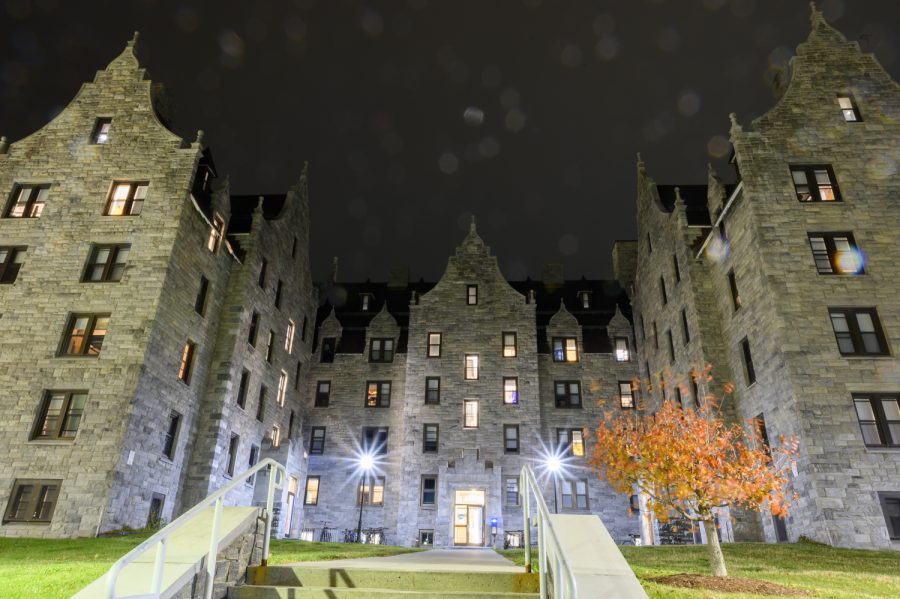 Converse Residence Hall stands against the weather as rain begins to fall, Oct. 23. Converse is considered to be haunted by some students.

UVM is no exception to the haunted essence of Burlington in the fall. Many students are eerily aware of the most unsettling spots on campus, and they have something to say about it.

Royall Tyler Theatre is home to the infamous haunts around UVM. The theatre was built in 1901 and houses a friendly ghost, senior McKenna Black said.

Black said she witnessed a man interacting with the ghost in the Craftsbury room, on the second level of the theatre. Black remembers telling the man to leave.

“He said he was sitting with his friend,”  she said. “I was like ‘dude, there’s no one here, just you and I.’ And he said ‘no, my friend is here, too.’ He said that they chat every now and then.”

After the encounter, Black remembered hearing about the ghost that the man may have been communicating with.

“I heard that there was a ghost of a man that did a lot for the theatre,” she said. “So, it’s a respectable ghost, but, man, did that really get me at the time.”

Converse Hall is one of UVM’s well-known haunted dorms. Sophomore Simran Saini, among other UVM students, is familiar with the haunted hype surrounding the residence hall.

“I heard that some ghosts haunt up in the attic, and they’re all spooky and scary,” she said.

Sophomore Hannah Poquette lives in Converse Hall and spilled about some of her chilling experiences.

“People say that a ghost named Henry lives in the attic,” she said. “Also, someone in my hall said they heard whistling and creaking coming from the attic before school started.”

As if creaky attics and famed ghosts aren’t enough, Poquette has experienced her own share of haunting moments. Poquette described how her room has an eerie demeanor.

“The door to my room always slams like there’s a draft, but we keep the windows closed,” she said.

Poquette added that hearing bumps in the night is common at Converse Hall.

“Converse doesn’t have  common rooms, but there’s a basement and an attic,” she said. “There’s always noise coming from the attic. It’s creepy up there, like, there’s a bunch of little hallways. It’s just really scary.”

Besides the buildings that have recognition as haunted sites, UVM is home to many places that spook students. Some residents of recently built residence halls still claim to hear some bumps in the night.

“I kept feeling like I was hearing people running around upstairs. After, like 10 minutes, I remembered that I live on the top floor, and there’s no one living above us,” Charland said.

“We know that it’s probably a maintenance problem, but it’s still kind of creepy,” she said.

As October progresses, with gray skies and bone-chilling air, the spookier side of campus makes its presence known.

No matter a residence hall, or the center of theatrical production, UVM is allegedly home to ghosts and ghouls, alike.

With the scariest season at its peak, students may find solace in knowing that many others also feel a ghostly presence lurking. Keep your spirits up for another UVM Halloween, or rather, keep them out.

Editor’s note: Senior McKenna Black is an illustrator for The Vermont Cynic.