Interview with a pusher: drugs on campus 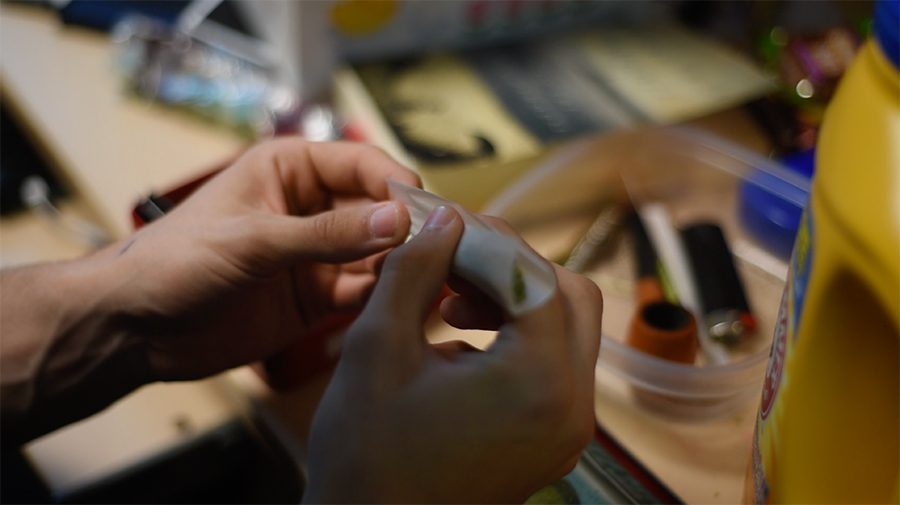 A student rolls a joint in his dorm room on April 20 in preparation for 4/20. “There’s this whole stigma around buying weed. Like you go into a place to buy weed, you’re intimidated. You think, ‘I’m buying drugs now, this is a drug deal, this is illegal,’” said an anonymous student drug dealer.

Cannabis doesn’t actually grow like a weed, at least in Vermont.

So to get pot, most people have to buy it. To buy cannabis, you need a dealer.

Greg is a pusher, or drug dealer, in his dorm. His name has been changed for this interview.  Greg lives on campus and deals with a partner.

In his room, Greg had an improvised bong, a gravity bong, set up on the windowsill, along with a few glass jars of weed, a scale and a science project sitting on his desk.

On his wall, there were UVM anti-drug and anti-tobacco posters.

A: It started out to be for the money, but just about a week ago, we made back all the money that we spent on like ski passes and new gear and shit like that, so now it’s just about getting people high.

Q: How many people do you sell to per day?

A: If we’re gone over the weekend, we tell people to come Sunday night.  This one time we did that, and there were 10 different people walking in and out of the room. It was kinda crazy. That happened like two or three times this year. It’s stressful, because you know the door is opening and closing, and people are leaving with bags in their pockets.

Resident Advisers at the front desk are sometimes scary because you can let someone in [to the building], and the customer will start talking about buying pot right in front of the front desk. What I have to do is pretend I don’t know them, and they’ll say stuff and I just won’t respond, because I don’t want the RAs to catch on.

Q: How long does it take for you guys to sell a pound?

A: Some nights we’ll push off whole QPs [quarter pounds] in just one night. A QP is four ounces. If we have enough people coming through, we can push off one of those in just one night, which is pretty cool, feels pretty good.

Q: How much do you push compared to other dealers?

A: So first semester, [we had a third partner who we dealt with] but once [he] left …and we found a better plug, we lowered our prices drastically.

Then this kid [a building over] got into the game, and he says he’s “a man of the people.” So he picks up not-great weed and sells it for dirt cheap, and he’s been [hurting business] because his prices are so low.

Q: Do you think most cannabis dealers sell just weed, or do they also sell other stuff?

When shrooms are on campus, they go within the day because pretty much everyone’s looking for shrooms. If anyone on campus had a constant stream of shrooms coming in, they’d make bank.

Q: What do you call yourself?

A: We don’t really call ourselves anything. There’s this whole stigma around buying weed. Like you go into a place to buy weed, you’re intimidated. You think, I’m buying drugs now, this is a drug deal, this is illegal.

We want to get rid of that idea that this is scary. If someone is comfortable in the place where they buy weed, they will come back. We ask them how their day was, what they’re doing later, just be as nice and open as they can. We don’t want the reputation of like, “those guys are scary.” We want to have a nice conversation.