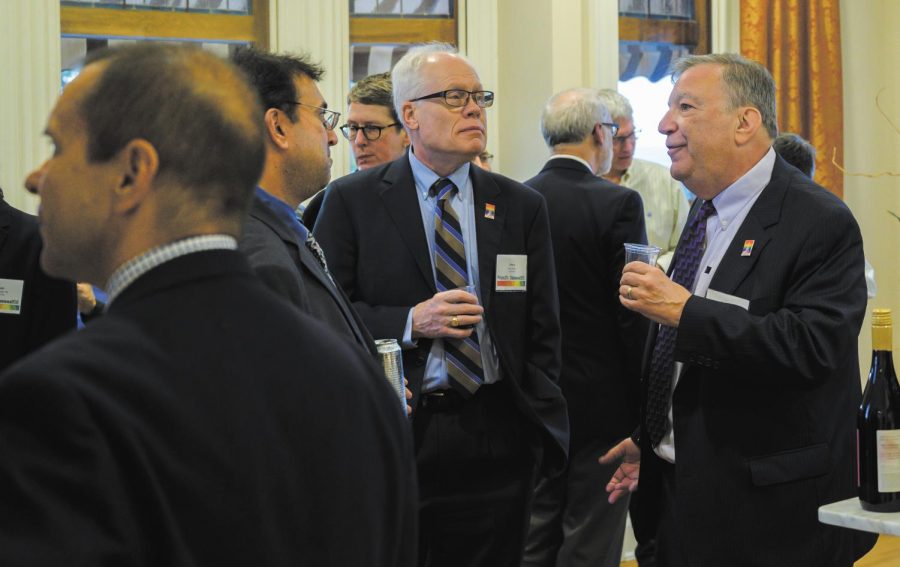 Planning Committee member Sanford Friedman ‘73 and his partner Jerry Hipps converse with other attendees of the Prism Center’s 20th anniversary celebration, Oct. 4. For the first time, the celebration, which took place in the Alumni House, was fully funded by the University.

Coinciding with the 50th anniversary of the Stonewall riots in New York City, the Prism Center held its 20th anniversary party on Oct. 4 in the Alumni House. Students and faculty gathered to celebrate the organization’s past and future.

Leaders in the LGBT community and alumni mingled, snacked and drank on the second floor of the Alumni House. TV screens showed pictures from the LGBT center’s past.

John Krowka ‘75 is the founding president of the Gay Student Union, the Prism Center’s predecessor.

Krowka said that he and other gay students and allies met off campus at a since-closed camera shop downtown.

The camera shop was called Abraham’s Camera Shop and was located at 111 Church Street.

“I ran into other students and faculty and we started talking about the idea of starting a gay student union,” Krowka said.

Krowka added that the gay student union was founded five years after Stonewall, and that universities around the country started forming affinity groups.

The students got assistant English professor Ken Seid to sponsor the gay student union, he said.

“It was approved without any controversy, but the papers picked it up, and it was on the front page of the Burlington Free Press the next day,” Krowka said.

Krowka said the club didn’t meet on campus because some members were nervous to be seen going to a gay student union meeting.

Former Prism Director Dot Brauer said they were the first staff member to work full time at the Prism Center in 2002.

The center relied heavily on student volunteers, and the next full time position wasn’t created until 2006, Brauer said.

“The policy work we did was for trans students,” they said. “They did not have safe places to go to the bathroom on campus because we had no gender neutral bathrooms.”

The Prism Center created preferred names for trans students in 2004 through a paperwork process and added the function to the schools software in 2009, they said.

“I think within the first 24 hours 300 students had signed up. It wasn’t just [transgender] students but also students with long names and international students,” they said.

During a speech midway through the celebration, planning committee member Sanford Freidman said that the celebration had been fully funded by the University for the first time.

“In the past we had a small budget from the alumni center and a small group of donors covered the rest,” he said.

Prism Director Kate Jerman said this was a good example of partnership.

“The University didn’t always feel so good about celebrating LGBT alumni,” she said.

The event brought together LGBT alumni of all ages together to celebrate progress made and obstacles still to be overcome.