The Vermont Cynic • May 13, 2021 • https://vtcynic.com/culture/life/professor-profiles/english-professor-brings-book-making-arts-to-campus/ 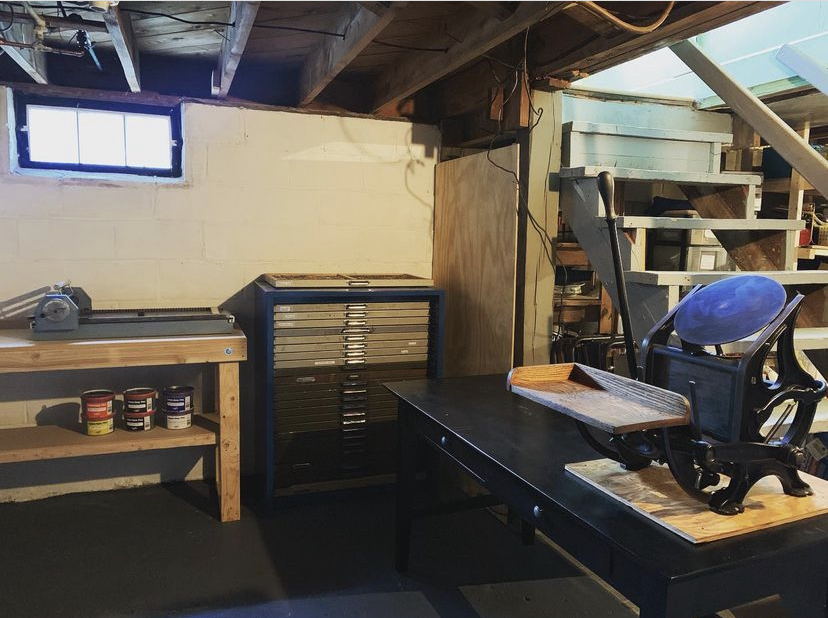 Professor Elizabeth Fenton has a printing press in the basement of her house.

Elizabeth Fenton, English professor and UVM alumna, is using her newly acquired hobby of printing to enhance her student’s learning experience and include dimension to the study of literary works.

“You start to see that the way that people made books and interacted with them had a really direct impact on how they produce literature and how they understand,” Fenton said.

About three years ago, Fenton was exploring other career options. As an incentive for her to stay at this institution, UVM offered her a large sum of professional development money. Fenton had a year to spend the money upon accepting the offer, she said.

Her research in literary criticism does not come with a large price tag and many of her resources come from UVM’s library. This gave Fenton an opportunity to pursue a long time interest.

“I have always been interested in print history, but I never really had the resources to explore it,” Fenton said. “All of the sudden I had this large chunk of money. I didn’t want to just spend it to spend it.”

Fenton said she then took the Internet to research how best to start working with printing presses.

Ebay proved to be useful and her first of four printing presses she would acquire that year was purchased, a fully functional and very nicely resorared tabletop press that was made in 1875 and weighs about 40 pounds.

From there, Fenton continued her research about the practice and learned different techniques through significant trial and error. This is how she stumbled upon an organization called Museum of Print in Massachusetts who buys, sells and educates about the art of printing.

“Right as I was spending this money they were having a letterpress garage sale,” Fenton said. “So I went down with my van and I bought a bigger 19th century press, a bunch of type and other supplies I needed to bring these things into a classroom.”

After acquiring the necessary tools to bring printing to her English classes, Fenton said she needed to learn more how to engage her students with the art.

The remainder of the professional development money was spent on classes to do so. She turned to the Rare Book School at the University of Virginia, which specializes in printing and caters to professionals such as librarians and professors, Fenton said.

“I went down to learn about the history of printing and I took a class called Teaching the History of the Book. It  helped me build some syllabus for my future classes,” Fenton said

Once Fenton was equipped to bring printing into her classroom, she had to focus on how to connect the academic content with the hobby. One example Fenton shared was a poem by Welsh Poet George Herbert published in 1633, titled “Jesu.”

“Jesu” is about a man who has the letters “Ju” typed on his heart. His heart then breaks and he has to pick up the letters, old and new. They are then placed back together to form a new word, Fenton said.

“That poem really only makes sense you understand that Herbert is thinking about words as modular units of letters that are individual pieces that can fall apart really easily but then could be found and reconfigured or put back together differently,” Fenton said.

On April 29 Fenton hosted a lecture open to the community on book arts and discussed its impact on her current project, a study of early Mormon documents. The talk was facilitated through the Silver Special Collections at Billings Library.

“We’ve been working with Liz for many years, even before she became interested in printing history, so we knew what she was up to,” he said. “It seemed logical to work with Liz to continue teaching book history.”

Marshall said that the Silver Special Collections team will continue to work with Fenton and the English and History departments in the future.

Fenton said she is eager to get back into the classroom once the pandemic is in our past, she said. She hopes that students’ exposure to printing and type-setting will stir interest in extracurricular press work that can be used for their individual passions, she said.

“It’s a great way to think about books and documents differently. It’s been really enriching I think for my classes,” Fenton said.

As far as Fenton’s own goals for pursuing her passion in partnership with printing, she is planning on composing her own book of sonnets, she said. From start to finish, she will construct the book.