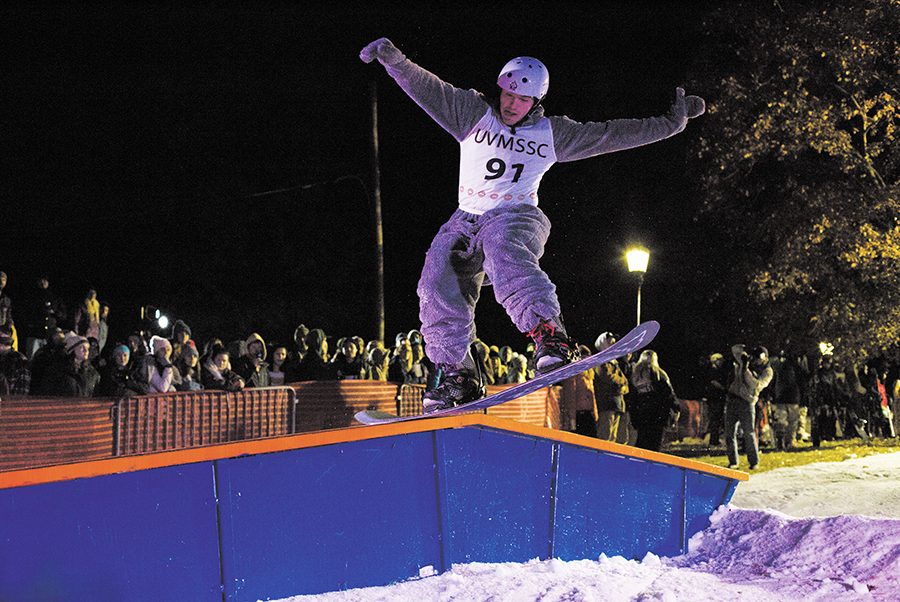 Senior Diego Travino grinds a rail in an all gray onesie at the Dawn of the Shred X: the Human SENDipiede rail jam, hosted by the UVM Ski and Snowboard Club Oct. 25.

“Mo Bamba” was playing in the background as skiers and snowboarders alike came down the miniature trick park set up on Trinity campus.

There were 44 hours filled with shoveled snow, several judges, 54 riders and skiers and hundreds of spectators at this year’s rail jam, a competition where participating skiers and snowboarders showed off their best tricks.

Skiers and riders jumped, flipped and spun off of boxes, rails and ramps provided by Sugarbush Resort. Some wore Halloween costumes because of the event’s proximity to the holiday.

Senior Gabe Bresnahan, SSC president, said members of the club shoveled for at least four hours a night for a week and a half to create the park.

Snow for the park is shaved off of local ice rinks, he said.

“We just get as many officers as we can, and our friends, and we all pack the trailer up with snow, and come and dump it out,” Bresnahan said.

SSC also partners with Sugarbush Resort. They provided all the rails and boxes necessary to put on the event.

For the second year, action sports media company Teton Gravity Research brought their “Stoke Mobile” to the event. They were on campus for the week, showing movies and raising brand awareness in partnership with SSC.

Alpine Shop, a local ski shop, was also there.

Bresnahan said partnerships are very important to the ski and snowboard club.

“It helps us to continue to do the things that we do and they’re a huge part of that,” he said.

Sophomore John Steck said it was his first time watching the event.

“It’s a really, really creative, really cool event, I think that there should be more things like this,” he said.

There were few complaints from the riders and skiers, however.

“It’s my favorite campus rail jam,” said competitor James. But, there’s always room for improvement.  “[The event would improve] If more people helped shovel, so there could be more snow on the ground”, said Ted, a junior skier.

Students came out in force to watch the rail jam, despite the 30-degree temperature. For the club, the cold weather was a plus.

“We’ve gotten extremely lucky this year… Last year was absolute insanity. It was 65 and rainy for two weeks leading up to this event, on our end it was total craziness … we didn’t even know if we’d have enough snow,” Bresnahan said.

Max Roe, who was manning the “Stoke Mobile,” agreed with the president.

“Last year was warm, rainy. This year they had the cold temperatures so Sugarbush Parks did a phenomenal job here,” he said.

The competition had more female representation than in years past.

“This year, we have a lot more female skiers and riders than we did last year, which we were super excited about. We have five or six total women snowboarders, and then I think around the same for skiers,” Bresnahan said.