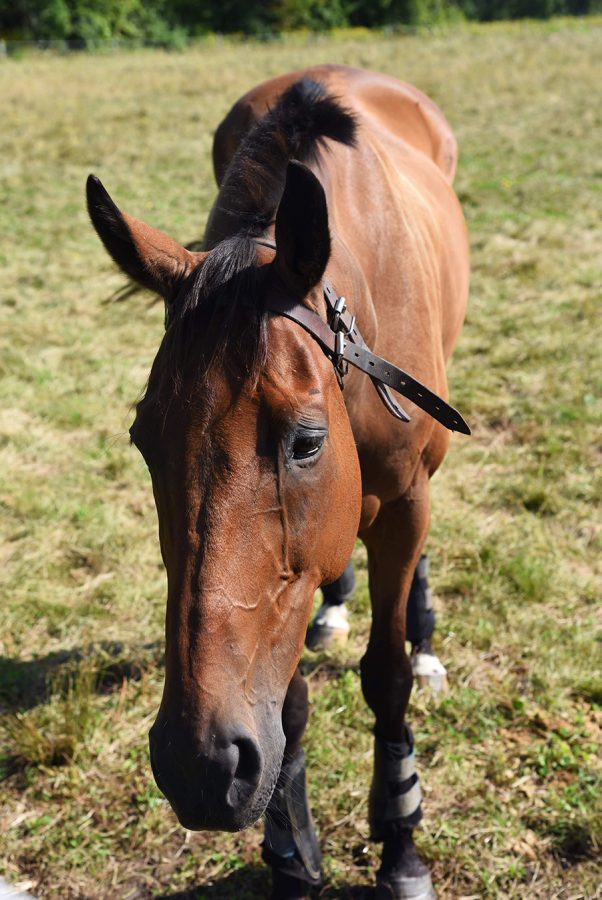 The smell of hay, freshly mowed grass and barn animals mingled with the early morning breeze.

Riders comfortably settled into the hustle of barn life that began at 9 a.m.

The UVM Horse Barn Co-op is made up of 12 student-owned horses, four horses that belong to the dressage team and six horses used by the animal science department, said Chrissy Rohan, faculty advisor for the co-op and a lecturer in the department of animal and veterinary sciences.

The co-op serves a purpose outside of just boarding horses. It is a place of experiential learning for animal science students.

In her role as faculty advisor and professor, Rohan spends about one-third of her hours at the barn.

“I’m kind of overseeing the health of the horses. We’ll have to meet the farrier or vet if they need those services,” Rohan said. “I’ll tend to hold class down here because I prefer to do the stuff hands-on rather than in a lecture format.”

The barn staff is made up of student co-op members, animal science majors in equine classes and the dressage team.

The barn is completely student-run and relies on the chores co-op members to perform, Rohan said.

“For each student-owned horse, the student is responsible for cleaning that horse’s stall every day, emptying, cleaning and refilling their water buckets and setting up their morning and night grain,” Rohan said.

While most boarding facilities in the Burlington area could cost up to $800 a month, co-op members pay $325  a month to house their horses.

Rohan said the trade off is that all of the work normally done at a more expensive boarding facility is done by co-op members.

For many students, the co-op is an affordable way to bring a horse to campus. Maya Whitaker is a junior on the co-op’s executive committee.

“I joined the co-op barn because I could not imagine going to a school where my pony couldn’t come with me,” Whitaker said. “When I visited I fell in love right away.”

Helen Bohn, a junior psychology major, boards her horse, Ritz, at the co-op.

“I joined the horse barn co-op at the start of my sophomore year. This is my second year as a member, and I am so happy that I made the commitment,” Bohn said. “It was a great opportunity for my horse to receive excellent care, and I knew I could trust her in the hands of other passionate horse owners and riders.”

Membership in the barn does not just require day-to-day care for a member’s own horse, but general chores as well as participating in the co-op community through meetings, according to the co-op’s website.

“When you’re in the barn, because it’s part of the University, everything has to have an educational mission, so if you’re in co-op, you take a one-credit co-op class,” Rohan said. “We meet once a week and that way we have time to connect to make sure everything is running okay.”

A co-op is much different than a typical boarding environment.

“At a regular barn, everything is done for you: your stall, feed, water, etc. All you have to do is show up and ride,” Whitaker said.  “At co-op, you are in charge of everything for your horse. I think you really have to love spending time with your horse to be in co-op, and not just riding the horse.”

Since the barn is run entirely by students, part of Whitaker’s role, along with two other students, is to operate like a barn manager would at a typical boarding facility, Whitaker said.

“They each have specific responsibilities in the barn like ordering feed, collecting board, that kind of stuff,” Rohan said.

The co-op’s educational philosophy is reflected through its annual community events.

The co-op will also have limited openings for new members in the fall and spring semesters.

Part of Rohan’s mission as an educator is to not only train horse-keepers, but also to develop real-world practices.

“You get these great life skills by being here,” Rohan said.