The art of the swipe: finding a match 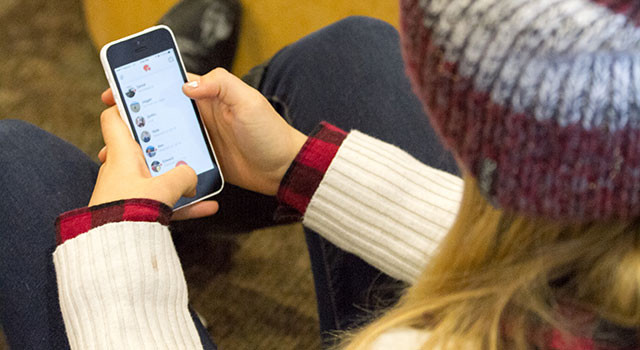 On sophomore Abigail Howlett’s phone you’ll find an array of apps like Snapchat, Pandora and Words With Friends. But there is one you won’t find: Tinder.

“The concept is creepy and it’s very superficial to be able to say yes or no based on someone’s picture” Howlett said.

Tinder allows users to connect with people around them, according to the Tinder website. Users can swipe right if they like a person or swipe left to pass.

If both people swipe right, then they form a match, according to the site. From there, users can message the person and share photos or what the app calls “moments.”

“I think Tinder is a joke and incredibly vain,” first-year Joyce Huang said. “But if someone is both attractive and interesting then it probably makes things easy for them.”

Sophomore Alli O’Connor said she has had some “awkward” experiences with the app.

“I used to go on it a lot but I’ve had a few awkward in- person encounters so I decided to delete it off my phone,” O’Connor said.

But students like sophomore Owen Goetemann said they have seen success with Tinder.

“I have plenty of friends who have used it and met up with people,” Goetemann said. “It’s really all about just being upfront and honest.”

Tinder is set to release Tinder Plus in the U.S. in March, according to an article from techcrunch.com.

The updated version has several new features including an undo button for accidental swipes and a “passport” feature, which allows users to search outside of their current location, according to the article.

“I kind of like the fact that tinder lets you meet people close to you,” sophomore Hannah Schaefer said.