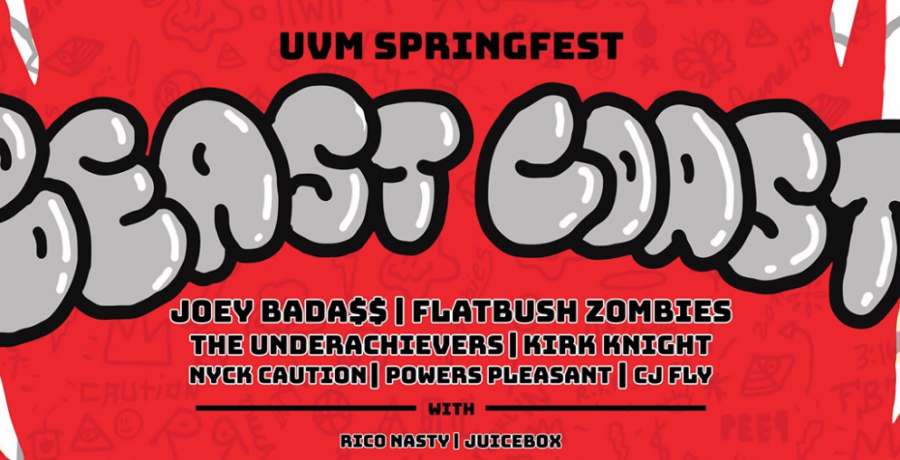 This year’s SpringFest will put the emphasis in “fest.”

After a successful collaborative tour in 2013, Beast Coast is back with new music and an expanded lineup. The group resently debuted the track “Left Hand.”

Maryland rapper Rico Nasty will open, as well as student band Juicebox, winner of Battle of the Bands.

Brewer said that this year the vision was to make SpringFest into more of a festival than in the past, with food and an arts vendor series to accompany the performers.

“It definitely gives SpringFest more of a festival vibe, when there’s multiple headliners,” he said. “This hasn’t been something that’s typically been done before, but we’re very excited to try it out.”

Traditionally, the headliner for SpringFest is announced at the Battle of the Bands. This year it was not.

The announcement broke on April 2 over social media due to contract obligations, Brewer said.

“It’s time. It’s a process,” he said. “A lot of people always forget that there’s a nitty gritty side to it,”

Because of the contractual and “nitty gritty side,” Brewer couldn’t share some things.

Brewer couldn’t specify who the other artist was.

UPB tries to make the best decision they can for the student body, he said.

“I really only can make a decision I think will make the public happy,” Brewer said. “I’m the voice of the student.”

Brewer couldn’t speak fully to the amount of money UPB spent to bring the Beast Coast super-group to campus, he said.

“It’s a fund we have to keep in case we have to move inside or [anything,]” he said. “I can’t really speak to the details behind that.”

Secrecy isn’t easy for Brewer, especially in the week leading up to the announcement of the headliner.

“I am a talker, dude. I can chat your head off about literally anything. And I loved people just coming to my room and asking me questions and just being like, ‘I can’t. I’m sorry, you’re going to have to wait,’” he said.

Some students don’t know who the Beast Coast collective is, but they are familiar with the individual artists within it. Many seem excited for the event.

Sophomore Claire Smith had not heard of Beast Coast, but was familiar with Joey Bada$$ and the Flatbush Zombies.

“Flatbush Zombies are cool,” he said. “You should send that event, A-OK with us.”

First-year Jacob Mintz Roberts said he is sure SpringFest will be a good time.

Brewer is pleased with the response he’s gotten so far from his peers.

“I think that overall there’s been a positive response from everyone on campus about it.” he said. “Those names individually were big, but we didn’t know what the actual collective would bring.”

If you find that tickets are sold out, check again a few days before the concert. Another few thousand tickets should be released if good enough weather is expected, Brewer said.

“We’ve released only 2,000 tickets so far,” he said. “The Wednesday before Springfest actually happens I’m going to have to make the call as say whether we’re going to have it inside, and they won’t release 2,000-2,500 more to reach othat [outdoor] capacity.”