We need to discuss abusive relationships 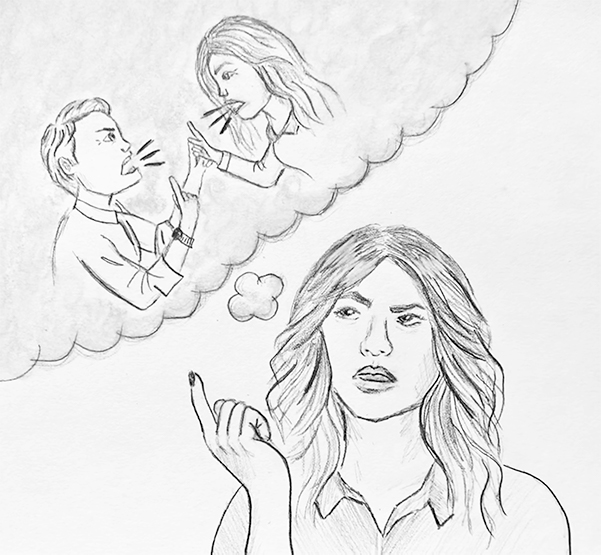 Domestic violence can be classified as “a pattern of behaviors used by one partner to maintain power and control over another partner in an intimate relationship,” according to the National Domestic Violence Hotline’s website. The website also makes it clear that anyone can be a perpetrator or victim of intimate partner abuse.

I never thought I would end up in an abusive relationship. In fact, I didn’t realize I was in one until a year and a few months in. I’m not alone – 1 in 3 college women say they have been in an abusive dating relationship, according to the 2011 College Dating Violence and Abuse Poll by Knowledge Networks.

The poll also shows that 70 percent of college students who have been in abusive relationships said that, at the time, they didn’t recognize their situation as abusive.

I was always the first of my friends to exclaim “Dump him” whenever a girlfriend was having relationship issues. I was attracted to kind people, people with great senses of humor who said nice things about their mothers. I couldn’t be in an abusive relationship. I wasn’t stupid.

That’s another thing – conversations around abuse are wildly misogynist. Sometimes, we dare to suggest that a woman was acting so crazy she deserved to be abused. She should’ve gotten out sooner or ran at the first red flag. We even doubt her claims of abuse.

The truth is, it’s harder than anyone thinks to leave a toxic relationship. It’s critical to note that abusive relationships never start as abusive: the relationship starts off feeling perfect before the red flags kick in.

Beyond that, abusive relationships are never abusive 100 percent of the time: the good parts of an abusive relationship can be as sweet and lovey-dovey as any healthy relationship. The good times often blind victims’ perceptions of the “bad times” – the flashing, red warning signs telling them to get out.

By the time you know something is horribly wrong, the perpetrator has already crushed your self-esteem to the point that you really believe you can’t live without them. Indeed, I was convinced that I would be completely alone if I broke things off with my abuser.

Discussions I’ve witnessed around abuse are riddled with stereotypes. We think of angry men in so-called “wife-beaters” slapping their partners and screaming at their children. When I feel comfortable enough with someone to tell them I’m a survivor of abuse, there’s one question they always ask: “oh, you mean he hit you?”

Physical violence is a very real and very scary facet of abuse. But it’s not the only kind. Emotional abuse is just as valid as physical abuse, and sometimes the implications are worse; while people will acknowledge a bruise or a scar, it’s harder to recognize the signs of a tortured mind.

Once the abuse in my relationship bordered on physical, I was too far gone from undergoing emotional abuse to acknowledge it. A telltale sign of emotional abuse is gaslighting: convincing someone that things didn’t happen that way, or that they never even happened at all.

Throughout my relationship, I was gaslit to the point where I was questioning reality. I felt absolutely insane; there came a point when I couldn’t even confront my partner about something I was bothered about, because he would tell me I was crazy, and I was convinced that he was right.

Another common sign of emotional abuse is isolation. My abuser was able to deceive my family and a handful of friends with his manufactured charm, but for the most part, my close friends were able to see right through him. The more I excused his shitty behavior, the more tension I felt within my friendships.

It’s common for abusers to come in between friendships so that their partner has a lack of support, especially when friends are able to spot the red flags. This tactic is another wild experience for victims. If your abuser is right, then all your friends are against you, but if your friends are right, then you’re in an abusive relationship. Reality is often harder to accept.

Other signs of emotional abuse include constant criticism, which your abuser will convince you that you’re too emotional/fragile/crazy to handle, acting jealous and possessive, using “punishments” like withholding affection or cheating, attempting to control your appearance and convincing you that you can’t do any better.

These signs are difficult to distinguish as they occur: you might feel that something is wrong, but not be able to pinpoint exactly what it is. As the popular quote from the TV show “Bojack Horseman” goes, “When you’re looking at someone through rose-colored glasses, all the red flags just look like flags.”

That’s why it’s so important to draw attention to the topic of abusive relationships: to help people recognize the red flags. Even if you’re well-versed on the signs of abuse, it’s hard to understand exactly how it feels until you’ve been through it.

I get why so many survivors are silent about their past relationships. After you’ve begun to heal, it’s incredibly difficult to go back to that dark place. However, it’s so important for survivors to share their stories once they become more stable.

Acknowledging that a relationship has been abusive is absolutely crushing, but it’s a huge step towards peace.

If you think you may be experiencing relationship abuse, please seek out support. Steps to End Domestic Violence Vermont is a local organization that helps people in abusive relationships; reading through their website is really helpful for those who want to learn more. The National Domestic Violence Hotline offers immediate support 24/7 at 1-800-799-7233.

Finally, if you’re a friend of someone going through a similar situation, please be patient. A solid support system is the most important thing for an abuse victims’ survival.

Yes, it’s irritating to see someone you care about going back to the person that hurt them, but know that they’re not trying to go against your advice. If discussing the relationship becomes too much, it’s okay to set boundaries – just let them know you’re still there for them.

It’s vital that we open up a discussion about abusive relationships that goes beyond stereotypes. Abuse thrives in silence, and because of that, we have a responsibility to speak up.