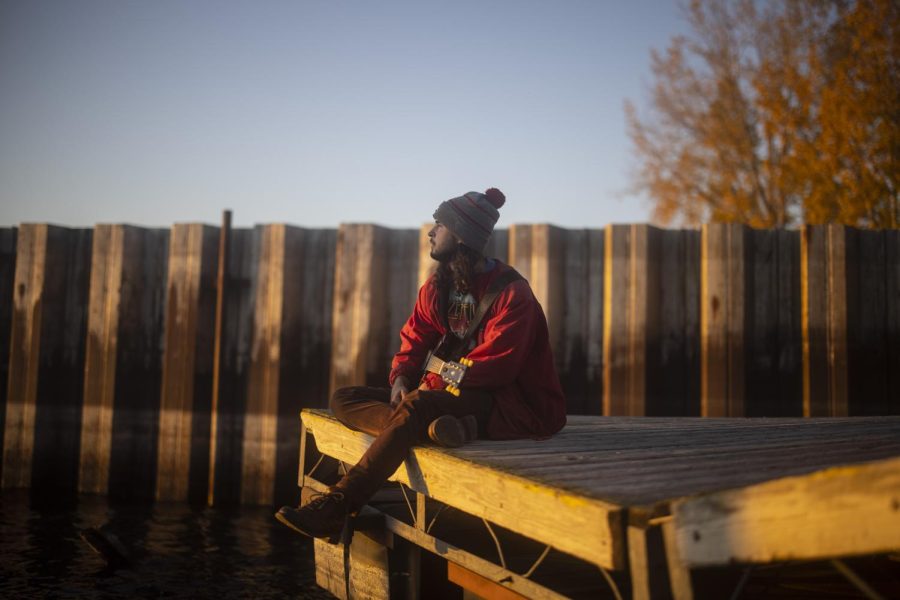 Senior Will Sturcke sits on a dock with his guitar.

A psychedelic backdrop and voices melting in the heat of emotion: it’s Moondogs.

Moondogs’ debut album “ACiD TeST” was released on Oct. 19. Moondogs is a Burlington based band led by senior Will Sturcke who recorded and produced the album on his own over the past year.

“ACiD TeST” comes jam-packed with a wide variety of sounds and textures, but themes of hope tie the songs together.

“LiGHT,” the first song on the album, highlights Sturcke’s ability to intricately weave sonic layers. The synthetic keyboards and electronic drums open a space, filled by a multitude of vocal harmonies.

Layers of sound build seamlessly into a chorus with Sturcke’s lyrics, “can we leave it all behind us and watch it all go up in smoke?”

Sturcke released three songs from the record as singles before the pandemic hit, but the majority of the album’s recording was completed in spring 2020.

“CyBorGz” is the second tune on the album. Sturcke used an arpeggiated synth, a keyboard that cycles through notes in a chord, which revolves in the background noise. The song drives fast, giving way to a groovy electric guitar.

The record’s angst, both lyrically and instrumentally, seems to reflect a frustration with our obsession with technology.

“Cyborgs, now they own a place in all we know,” Sturcke sings, almost crooning before an energetic, impassioned guitar sings a solo in a similar vein.

“Hip-hop had a big influence on the production of the album,” Sturcke said.

Country icons Chris Stapleton, Colter Wall and The Wood Brothers are other influences on the record, Sturcke said.

The echoes of these voices are present in songs like “Wolves” or “WhY?,” which take a more folksy, guitar heavy approach.

“I was listening to a lot of Dead and Co. last year too,” Sturcke said.

Moondogs live performances in bars and basements lean more into the jam ethic, extending songs with improvisational sections. About half of the songs Moondogs play live are covers and half are originals, Sturcke said.

“Walk iT Off (Chemical Warfare)” draws from a jam sound with a funky guitar. The opening is conducive to a stank-face and irresistible head bobbing.

Sturcke’s vocals are shrouded in distorted noise and a filtered guitar spices up the backbeat. The initial groove swaggers closer to a Cage the Elephant sound.

This song in particular showcases Sturcke’s ability to blend genres within songs, yielding creative new sounds. The record is cohesive despite its diverse influences; songs feel connected by emotion, but each is unique in its own right.

After the release of “ACiD TeST,” Burlington audiences could begin to hear a more distinct sound emerge from the local group.

“ACiD TeST” is out now on all streaming services.