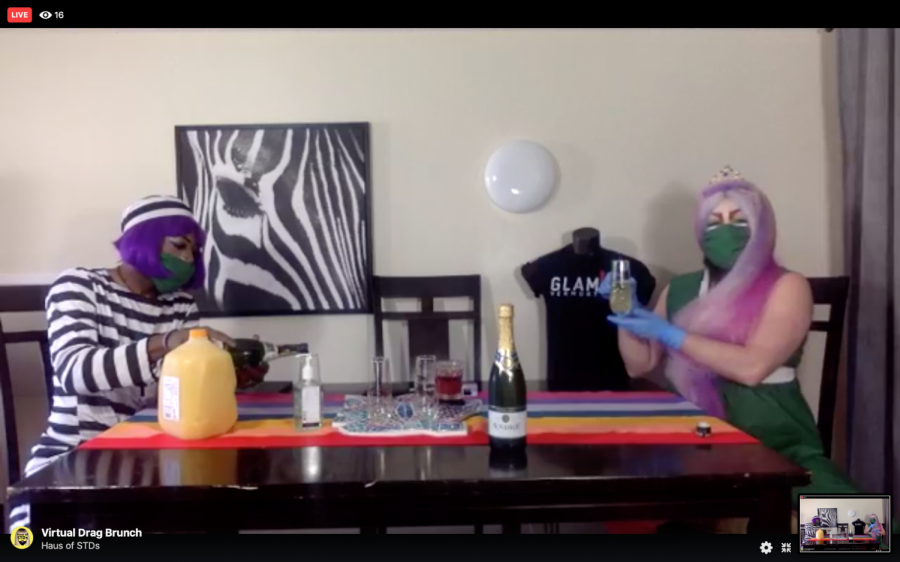 This past weekend, sass was served and mimosas were spilled in quarantined homes all around.

Haus of STDs and GLAM Vermont hosted their “Queer-antined Drag Brunch” at noon March 21, from a dining room in Colchester onto Facebook livestream screens in states all over.

The event was not in-person due to the recently increasing new coronavirus pandemic.

Haus of STDs is a drag crew, while GLAM Vermont is a HIV prevention program within the Pride Center of Vermont, who was accepting Venmo donations during the livestream.

Viewers were encouraged to drink mimosas along with the queens and send in selfies of their “brunch lewk[s]” to be featured in the livestream. Giveaway prizes were offered as rewards.

The brunch began with the queens stationed six feet apart from each other at a brunch table, wearing surgical masks to prevent the spreading of germs.

The brunch also included their colorful pink and purple wigs, along with rave music blazing in the background.

As the event ensued, the queens demonstrated how to pour a “proper mimosa,” and interacted with comments from viewers.

Johnny Chag is the creator of the event and was a drag queen featured at the brunch. He works with GLAM Vermont, and is the leader of Haus of STDs.

On the livestream, Chag’s drag queen persona Giardia said to the audience that “this is all new to us, and we’re all in this together.”

This was followed by a toast and an outfit reveal: Giardia’s leopard-fur coat.

Throughout the entirety of the livestream, there were on average about 40 viewers who offered reactions and comments to inspire the drag queens’ performances.

“It’s just ‘do your thing, yas queen, whatever’ for the first half hour,” Chag said. “Then as soon as the mimosas start flowing, then you know, the creativity comes out.”

Graduate student Owen Greene tuned in for the brunch with a breakfast of his own and a cup of tea to accompany him.

Greene said he enjoyed witnessing the drag creativity from the comfort of his own home.

A pandemic can be demoralizing and online classes can be unmotivating, Greene said, so he sees the value of still having social events like these to lift energies.

“I was surprised at how fulfilling it was even to have that level of interaction,” Greene said.

All of GLAM Vermont’s events are fundamentally social events, Chag said. This is why they developed a series of online events during this time.

“A few friends of mine that do drag brunches across the country have been transitioning to virtual drag brunches as well, so I saw a few of them go live and I was like, ‘we could do this in Vermont,’” Chag said.

Chag said social interaction is important especially now, and the unique services his organizations offer are still vital and need to continue to serve their communities.

He also said artists still need a venue from which to perform.

“It’s really exciting… [online events have] generated a lot of excitement in our community, because it’s so focused on our needs right now,” Chag said.

Chag said he thinks it was a good thing he started to create online events before the virus really got to Vermont. He felt alarmed by what was already happening in other countries like Italy.

It was important for community leaders to step up and spread the message that we can still continue to have fun and interact, but safety and staying at home must remain our top priority, Chag said.

Another drag queen at the brunch, H.P. Vera, said a perk to having the brunch online was increased accessibility, and she was surprised by how many people watched the event.

The brunch continued as the queens discussed and asked viewers about whether it was possibble to have safe sex during a pandemic, the probable success of cyber sex in a time like this, celebrity gossip and fashion and makeup tips.

Later, the queens engaged viewers in a trivia game.

The brunch’s finale was a lip-sync performance by H.P. Vera, and a “socially distant cheers” to the audience from all the queens.

Chag said they will most likely be doing another virtual drag brunch within these next however-many weeks of quarantine.

Although profit will be lower during this virtual event period, Chag said he’s learning a lot for his business in terms of graphic design and social media promotion.

“I think we’re all gonna emerge from this better,” Chag said.