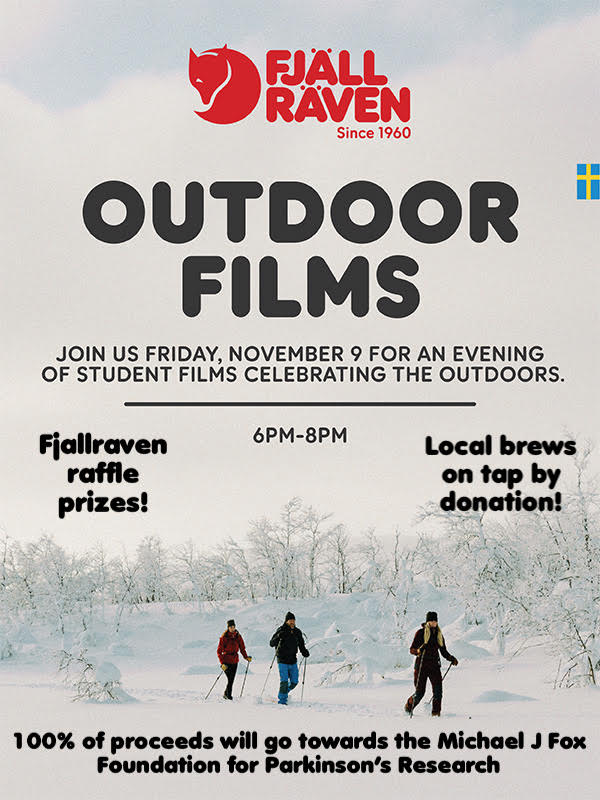 Fjallraven will host a showcase of student-created outdoor films from 6-8 p.m., Nov. 9 at their store on Church Street. The event was organized by senior film major Peter Ackerman.

All proceeds from this event will benefit the Michael J. Fox Foundation. The foundation, which is the largest non-profit source of funding for Parkinson’s drug research in the world, was started by the actor in 2000, according to its website.

Ackerman’s father, Francis, passed away three months ago after a 14-year battle with Parkinson’s disease, he said.

“He died two weeks before school started,” Ackerman said. “So I turned my feelings into film.”

Ackerman’s father introduced him to all nature had to offer in the backwoods of their house in Maine, and he became serious about film in middle school, he said.

“I got my first camera and began making short documentaries,” he said. “I became passionate about making content that deals with the environment and the stories that arise from our relationship with it.”

“Seeing [my cousin] work on that big of a project re-invigorated me,” he said. “It showed me a kid from rural Maine can make it in general cinema.”

Ackerman will be showing his short-film “Dead Meat” at the Fjallraven showcase. The documentary explores humanity’s modern relationship with road kill, and won the Best Young Filmmaker Award at the Maine Outdoor Film Festival 2017.

“There’s Only One,” a film Ackerman created with sophomore film major Augie Benjamin, will also be shown. The film won Best College Film and Audience Favorite at the Tap Into Film Student Slam this past April in Burke, Vermont.

Films by Peter Vanderwilden ’18 and seniors Mark Hendry and Colby Yee will also be shown.

Vanderwilden’s film “Response” was his senior capstone project while at UVM and was just shown during the Vermont International Film Festival.

At the showcase, donation-based beer pints will be provided by Drop-In Brewing from Middlebury, Ackerman said.

Other sponsors of the event include Red Bull, who will provide free Red Bull drinks, and Fjallraven, who will donate jackets, pants and backpacks for a raffle.

“This event combines two of my passions: outdoor films and Parkinson’s research,” Ackerman said. “Both are extremely important to me.”