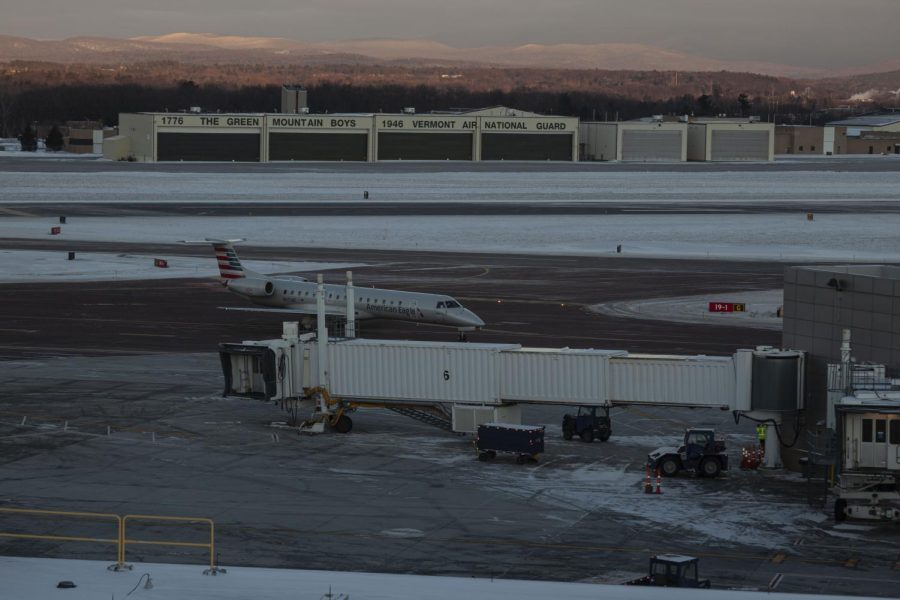 An American Airlines plane from Philadelphia lands at the Burlington Airport landing on Jan. 14.

Due to the possibility of canceled flights because of COVID-19, some students experienced stress about making it to campus in time for the first day of class.

“I already had to move my flight up so I don’t get stuck here because I’m coming from Seattle which was having a lot of problems,” junior Shawna Hui said.

The holiday season resulted in increased traveling for vacations and visiting families, but with bad weather and staffing shortages due to COVID-19 outbreaks, airlines canceled flights in large quantities according to a Dec. 30 New York Times article.

Junior Emily Mackay experienced these airline problems while attempting to travel during their winter break.

“I was traveling from Idaho to New York and both ways my flights were either canceled or delayed,” Mackay said.

Junior Sofia Brinkerhoff said they feel anxious about flying back to Vermont from California.

“I didn’t leave myself a lot of room for error, if my flight gets canceled or delayed and I have to reschedule I do not want to risk running up against when classes are starting,” Brinkerhoff said.

Gary Derr, vice president for operations and public safety, said students should try to plan on the possibility of canceled flights by booking an earlier flight, instead of flying in the Monday before class.

First-year and sophomore students who live on campus have to wait to return until dorms open back up.

UVM dorms don’t open for returning students until Jan., 16, two days before the start of classes according to the UVM website.

With long travels, some students don’t have any other options than to get on a plane.

“Hypothetically, I could take a train back to school but that would take me about four days,” Brinkerhoff said. “I can’t rent a car because I am not 25 yet so that doesn’t really leave me with many options.”

If students run into trouble with flights, Derr said he believed faculty would be lenient.

“It’s the beginning of the semester, so while it’s not great to miss a class if you are missing a class on the first day I think faculty members would be understanding of that,” Derr said.

Students are left with fears about being stranded in their hometown or missing the first day of classes.