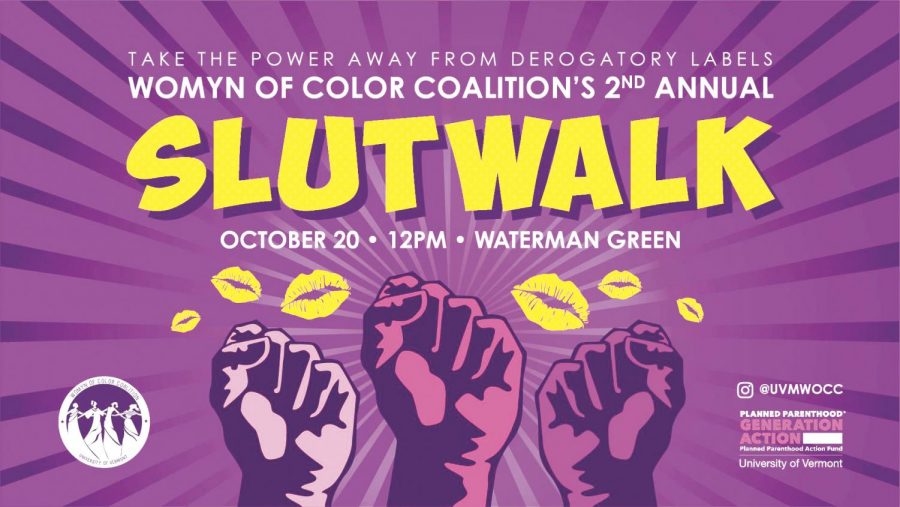 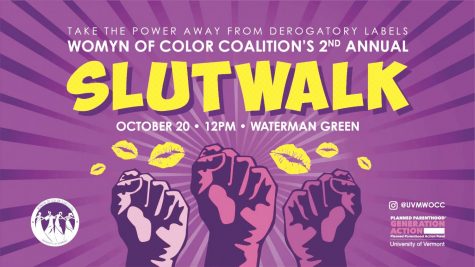 On a warm Saturday morning, students in tube tops and overcoats, faded jean jackets and fishnets, overalls and dresses gathered in front of Waterman to participate in UVM’s annual Slut Walk.

Sophomore RiRi Stuart-Thompson, co-marketing and political chair of the Womyn of Color Coalition, addressed the crowd of about 30, over twice the size of the previous year’s, with a megaphone.

“Please raise your hand if you think this walk today is just to reclaim the word ‘slut,’” she said. No one moved.

This year marked the second time the Womyn of Color Coalition has teamed up with Planned Parenthood Generation Action to host the Slut Walk at UVM.

The Womyn of Color Coalition seeks to empower and unite women of color in the UVM community, and Planned Parenthood Generation Action works to help young people achieve sexual and reproductive freedom, according to both their websites.

According to the Amber Rose Slut Walk website, the event began in 2011 after a police officer informed a group of Toronto college women that they should avoid dressing like sluts in order to not be victimized.

Since then, cities and campuses in over 200 countries have hosted their own Slut Walks to speak out against sexual assault and derogatory labeling, the website states.

According to her website, although Amber Rose didn’t start the Slut Walk movement, the celebrity activist has been key to promoting and popularizing the event.

The Womyn of Color Coalition started hosting the event in part to bring attention to the whitewashing that often happens in conversations around sexual assault, Stuart-Thompson said.

“Why is it, whenever there’s a movement, we only see white women or white men,” she said, adding that people of color are often the ones forming these events.

Stuart-Thompson said that the goal of this year’s Slut Walk was more educational than the last, which was more focused on the march itself.

She said this would involve talks on tone policing, or the dismissal of arguments based solely on tone instead of content, and sexual health.

“I want everyone to rewire their notion that clothing equals sexuality,” Stuart-Thompson said. “It is not an invitation to use my body.”

Stuart-Thompson mentioned that discussing these topics can be uncomfortable, but is necessary.

“Women, femme, non-binary, we are all in this together,” she said. “We all have experience with this.”

Senior Teremy Garen, president of Planned Parenthood Generation Action chapter, said she hopes the event will spark an even bigger conversation than it did last year.

She said that much of UVM still has a long way to go toward awareness of sexual violence, and that unrealistic talk of eliminating sexual assault only adds to this.

“It’s tough to recognize that these are things that are still happening in our community,” Garen said.

Garen wants to bring more awareness to the topic in a way that’s powered by people reclaiming the word, she said.

The last Slut Walk led to the Womyn of Color Coalition receiving hate mail from both UVM and the greater Vermont community, Stuart-Thompson said.

“I thought we were done,” she said.

Stuart-Thompson anticipates more criticism and hopes people will take the opportunity to listen.

“I’m happy that we got your attention,” she said. “Now let’s actually keep it and educate you.”

At around 1:00 p.m., the crowd marched through campus, chanting “my body, my choice,” and “yes means fuck me, no means fuck you.”

“I want people on Trinity to hear you,” Stuart-Thompson said to the crowd. “I want Tom Sullivan to hear you.”

Junior Lu Birney said she was there to help support women’s empowerment and taking power away from derogatory labels.

Birney is from the campus group A Different Voice, which showed up to help support the event. The organization aims to empower a greater diversity of voices in philosophy, according to its Facebook page.

“We’re hoping to get the name for our club out there more and also raise awareness for the issues [Slut Walk] is here for,” Birney said.

Birney encouraged newcomers not to be afraid to try out future walks.

“This is my first time,” Birney said. “I barely know anyone here, and it’s still a really welcoming space.”