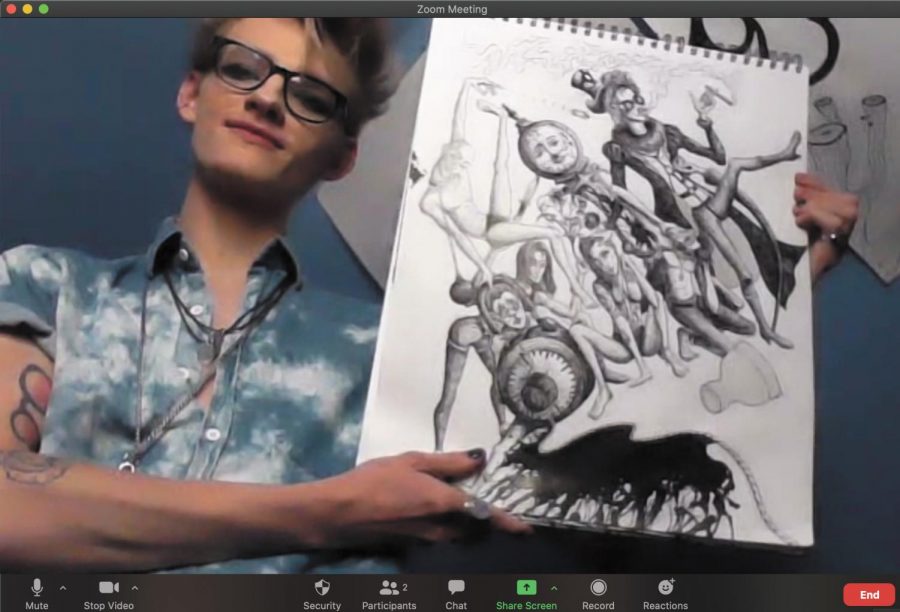 Senior Cole Thorton shows one of his drawings via Zoom call, Oct. 9. Thorton is enrolled in a fully online advanced drawing course along with a hand building hybrid course.

Williams Hall, home to the Art Department and Anthropology Department, the brick red focal point of UVM’s picturesque campus facade, is missing the usual swarms of students on the front steps this Fall.

While most students struggle with the challenges of dysfunctional breakout groups and less than tech savvy professors, studio art students shared their unique experiences transitioning to remote and socially distanced learning in light of the pandemic.

Online, in-person and mixed classes have their advantages and disadvantages according to various studio art students.

“Online critique is really challenging,” Brown said. “Oftentimes the photo isn’t zoomed in correctly or the professor is accidentally showing the unedited version.”

Senior Cole Thornton echoed this sentiment with his experiences with his Advanced Drawing class.

“We are taking pictures of our art with our phones and the scale isn’t communicated,” Thornton said. “It makes it harder to observe and I’ve noticed the critique conversations have more pauses when we are online.”

Brown also described the dynamic aspect she is missing in her current art classes where she is required to sit at a specific easel and use supplies assigned specifically to her.

“We used to do a lot of still lives and move around the room to change perspectives but we don’t do that anymore,” said Brown.

In addition to the logistical challenges of art classes in remote or distanced settings, Thornton said he misses the social aspect of art classes.

“The part I miss more is being with other people to socialize and get to know who they are and the person behind the art they create,” said Thornton.

Senior studio art minor Keely Lyons said she enjoys the privacy of painting in her apartment instead of the classroom or studio.

“Now I listen to music while I draw, I also like not having to be paranoid about drawing in public that people are watching and judging,” Lyons said. “Now that it’s just me I don’t have to worry.”

While some, like Lyons, choose to do their online work at home, the art studios in Williams and Cohen are still open 24 hours for art student use with a limited capacity of 10 people.

“It’s very zen at night,” Brown said. “A lot of people tend to work at night and play music. I’ve definitely pulled an all nighter there before.”

For Thornton, working at home can be inconvenient but a necessity when studio space runs out.

“If I’m working from home then I am working on my floor and it can get pretty crowded when I’m using a lot of materials,” Thornton said. “It’s nice to have flexibility with when to do my work but I find I have a lot of time and space constraints.”

Brown noticed that her painting class has been working on a much smaller scale to make it possible to bring their art home to work on while previously she would create much bigger pieces.

Brown acknowledged the effort by her professors to continue classes as traditionally as possible in a distanced in-person classroom setting.

“My professor has done a really good job making sure we can still interact with each other’s art. We mill around the room, six feet apart to observe other people’s work for critique,” Brown said.

Ultimately Lyons would not enroll in another online or socially distanced art class in the future if given the choice.

“It’s so important to see work up close and in person,” Lyons said.

Lyons said that the university and the world was unprepared to move to online forums.

“For a generation of people criticized for constantly being on their phones, we were incredibly unprepared for an online world,” Lyons said.