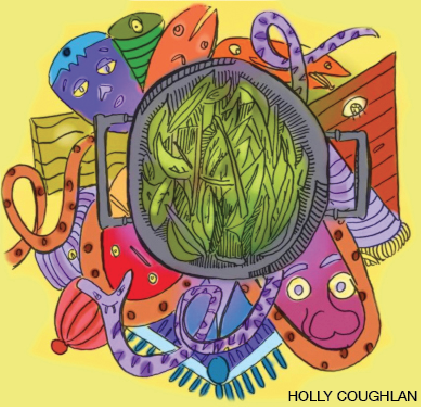 Though psychedelics are often portrayed in popular culture as recreational drugs, psychedelics like ayahuasca have played a role in religious ceremonies and alternative medicine.

Josh — not his real name — a junior, was 23 when he took mental health treatment into his own hands with a do-it-yourself psychedelic solution — homemade ayahuasca tea.

“A common thing people say [about psychedelics] is that you feel all the love of the universe, and that’s what I felt,” he said.

Ayahuasca, a hallucinogenic drug, is used to induce visions, heightened emotional states and bring vivid recollections of memories. Side effects range from mild to severe, and include digestive upset and psychological disturbances, according to an April 2018 CBC article.

Ayahuasca is made by combining two plants — one containing a psychoactive chemical called DMT, and another to inhibit the breakdown of DMT by enzymes in the stomach.

Many different plants can make the drug, according to the Multidisciplinary Association for Psychedelic Studies website.

Ayahuasca’s legality in America is a gray area, Anderson said, because many of the plants used to brew it are legal in the U.S., but DMT is an illegal Schedule I drug.

The drug has origins in South American religious ceremonies, but in recent years has also been used as an alternative psychological treatment in the U.S. and Europe, according to a November 2018 Vox article.

Josh first attended UVM as a 19-year-old but dropped out amidst a battle with severe depression and social anxiety.

He said taking antidepressants and Adderall only made his illness more unbearable. He found himself building a dependency on them rather than developing healthy coping mechanisms.

From the ages of 20 to 22, Josh continued to struggle with mental health. During this time, he avoided psychedelics, fearing a negative experience as he had been told many terrifying stories about psychonautic adventures gone wrong.

A TED Talk about psilocybin mushrooms’ effect on neural pathways piqued his curiosity about the potential therapeutic effects of psychedelics when he was 23.

Eventually, he decided to try ayahuasca. He bought two different plants online with little hassle and brewed them himself. His experience tripping was overwhelmingly positive.

“I learned that fear is not negative,” he said. “It’s not bad.Fears are your guides. I started stepping out of my comfort zone and talking to more people. It made me feel better than I have in my life, in completely sober states.”

In the months following his first trip, Josh made several positive changes to his lifestyle, such as implementing meditation and yoga, and re-enrolled at UVM.

Psychedelics were not a permanent quick fix for his mental health. “It’s not like you take [ayahuasca] and feel better forever,” he said.

He has experienced some regressions in his progress in the past and emphasizes that personal progress must be continued post-trip in order to continue the drugs’ positive effects.

Some trips he has taken on psilocybin and ayahuasca have been frightening in the moment, but he still finds these experiences valuable.

He has consistently gone to therapy since he began his psychonautical journey and believes that the use of psychedelics has helped him to be more open in therapy sessions, implementing Cognitive Behavioral Therapy.

Overall, the combined effects of these drugs and lifestyle changes have been positive and transformative, he said.

“I never thought I’d go back to school,” he said. “Now I’m planning to graduate next semester, and I’m [majoring] in psychology, which is my passion.”

Research on ayahuasca is still in its early stages, and researchers are still trying to figure out how to use it most effectively.

“At University of California Los Angeles and Johns Hopkins University, preliminary studies on people with terminal illness, cancer, stuff like that, show there is evidence that they help with depression,” he said. “I think within 10 years it will be legalized for psychotherapy.

“I truly believe that if these medicines are integrated into psychotherapies in a healthy way, they can help revolutionize the mental health industry.”

Students struggling with mental health can call UVM Counselling and Psychiatry Services at (802) 656-3340.