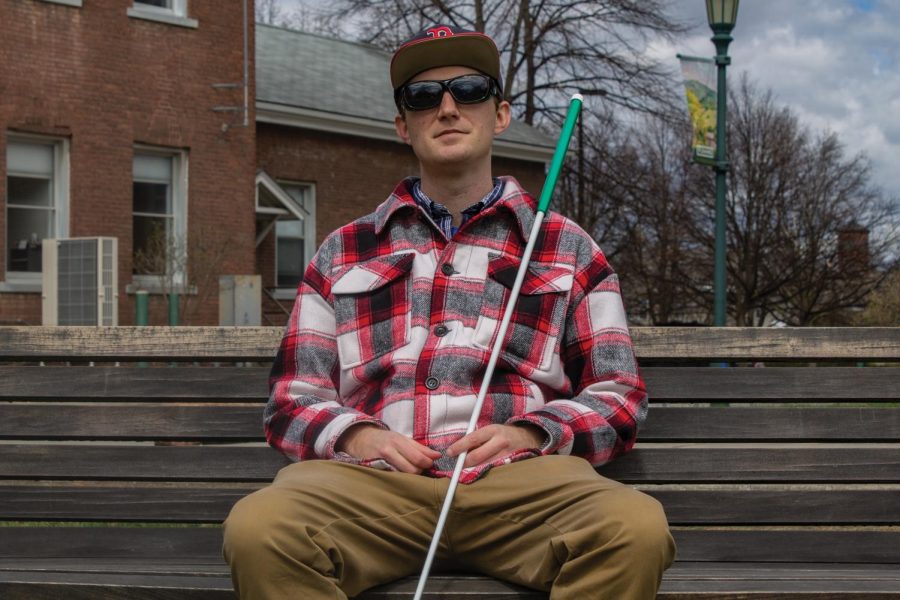 Graduate student Justin Salisbury outside of Perkins Hall April 22. Salisbury, who is blind, advocates for child custody rights for parents with disabilities.

A Jan. 7 bill in the Vermont legislature that aims to protect the rights of parents with disabilities will likely need to be re-introduced in January 2023, said its sponsor, Chittenden District Representative Maida Townsend.

The chances of the bill getting through the legislature before the session ends in early May are low due to the timing of the bill’s introduction, Townsend said. Laws regarding parental rights in general take more time to process.

The bill has been in the House Committee on Judiciary in the House since January, meaning it is not on the docket to be voted on, according to the Vermont Legislature website.

Townsend is pushing to invite parents with disabilities to give testimony before the end of the session to get a head start on preparatory work before reintroducing the bill in the next session, since it will likely not progress to the voting stage, she said.

Bill H.506 proposes to prohibit the use of a parent’s disability as justification for the removal of parental rights or custody of a child, unless doing so is necessitated for the child’s wellbeing, Townsend said. Without this protection, children are separated from their families based on a preemptive assumption of the parent’s capabilities.

“People’s children can be taken solely because they have a disability,” Townsend said. “It is presumed in some cases, that because of the disability that it’s not in the child’s best interest to stay with their parents.”

Justin Mark Hideaki Salisbury, a UVM doctoral student, is a blind and Indigenous person and serves as the Legislative Director of the National Federation of the Blind of Vermont. The practice of deeming disabled parents unfit solely based on their disability is a continuation of eugenics, he said.

Eugenics is a false theory that suggests an optimal human race can be formed through selective breeding, according to the National Human Genome Research Institute.

In Vermont, this theory resulted in 253 forced sterilizations from 1931 to 1963 based on criteria outlined in a UVM-run survey, according to a May 10, 2021 Cynic article.

Vermont adopted a joint resolution April 1, 2021 to apologize for state-sanctioned eugenics policies targeting those with mental and physical disabilities in the early 1900s, according to the Legislature of the State of Vermont.

Part of the process of apologizing for eugenics means Vermont must stop doing it, Salisbury said.

Bill H.506 is necessary because the Department for Children and Families frequently perceives disability as a barrier to adequate parenting, Salisbury said. However, a disability does not render a parent inherently incapable.

Low expectations, misperceptions and an absence of protective legislation are what actually lead to capable parents with disabilities losing custody, Salisbury said.

“[It’s assumed] there’s just something inherently maladaptive about us that we will pass on to the children whether they have our disability or not,” Salisbury said.

“There’s this assumption that because we have a disability, and the disability is incurable, then the problem can never be resolved,” Salisbury said.

When children are taken from their parents, they become part of the foster care system and facilities contracted by the state temporarily hold them, Salisbury said.

Alice Goltz is a disabled parent from Montpelier whose daughter was taken from her immediately after birth, according to an Aug. 23, 2015 VT Digger article. For women like Goltz, adoption permanently severs any connection the parent has with their child, Salisbury said.

However, Susan Yuan, a Vermont-based psychologist with expertise in parents with disabilities, said Goltz would be a capable parent given adequate support, according to the article.

“[A] neglected child [is defined as] a child whose physical health, psychological growth and development or welfare is harmed or is at substantial risk of harm by the acts or omissions of his or her parent or other person responsible for the child’s welfare,” according to the DCF.

Child safety interventions emphasize the safety of the child in question above all else, according to the DCF’s Policy Manual. Because of this, they recognize that the investigative process is invasive and strive to keep families together when possible.

The manual also states some individuals may require accommodations in order to be successful parents.

Goltz’s child was adopted and Goltz is prohibited from visiting her daughter, according to the article. Once a case is closed, DCF does not reopen the opportunity for visitation.

DCF did not respond to the Cynic’s request for comment in time for publication.

“We’ve got about 20 examples of other states that have passed these laws,” Salisbury said. “And we can basically follow in the footsteps of many of them and use them as a model. That’s what we’ve done with H.506.”

Illinois, Nebraska, Oregon and Virginia are enacting legislation mandating conclusive evidence that a parent’s disability makes them unfit to safely raise a child during custody investigations, according to the National Research Center for Parents with Disabilities.

In these states, disability can no longer be used as the sole justification for removal of child custody from parents with disabilities, according to the NRCPD.

At the institutional level, UVM must emphasize disability justice by educating its students about the persistent prejudice that occurs with this form of continued eugenics, Salisbury said.

“I hope we’re teaching the social work, human development and family studies students about this problem,” Salisbury said. “Hopefully teaching them to not contribute to it can break down these barriers.”