Classics struggles to not fall into ruins 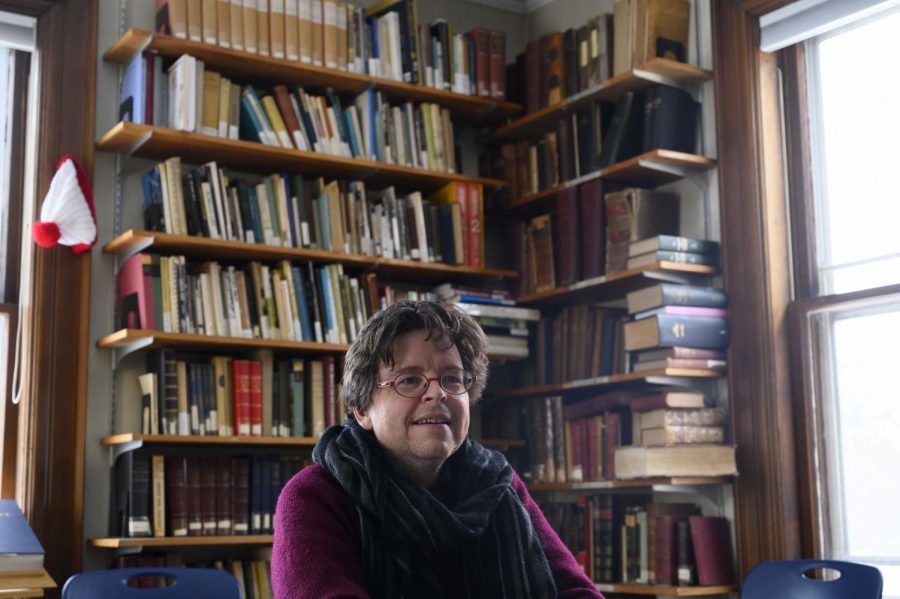 It’s 9:40 a.m., and students in classics professor Mark Usher’s “Classics Then and Now” are excitedly chatting about a book they read, “The Golden Ass of Lucius Apuleius.”

This book was adapted from Latin by the professor standing in front of them.

As Usher claps his hands and discusses his work, one might say there is no lack of passion in the classics department. Yet, there is slowly a lack of funding and professors.

With the rise of science, technology, engineering and math majors, the interests of UVM’s students are starting to shift from humanities to STEM programs.

“I understand that [other departments] need help, but it’s coming at the expense of the smaller departments that are getting weaker as a result,” Franklin said.

According to UVM’s program enrollment records, the number of courses offered by the classics department has fluctuated from 2015 to 2019, going from 16 classes a semester in 2016 to seven in 2018.

In addition, the number of students taking the classics classes offered is on a downward trend compared to UVM’s STEM courses.

First-year Felisa Hollenbeak, a biochemistry major, is aware of the defunding but thinks that humanities and STEM work together to help humans form a view of the world.

“I don’t think that universities should defund certain programs over the other just because somebody thinks that one will be more useful and more practical for people to pursue as a profession,” Hollenbeak said.

Bill Falls, dean of the College of Arts and Sciences, addresses the shrinking department as a result of UVM’s student body’s fluctuating interest in majors.

“The college was put in a position where we had to make some challenging decisions about staffing,” Falls said. “We have growth in some of the social sciences like economics and political science and certainly in biology. I mean, that’s what students are wanting to major in.”

Despite teaching in the classics department, Usher said he understands why the budget is shifting at UVM and other universities throughout the U.S.

Students today want preparation in a specific discipline, like choosing a major for a specific profession, Usher said.

Junior Ben Gaucherin, a classics major, is concerned about the declining of classes because some of his required courses for his major are not being offered as regularly as they once were.

“It’s difficult to see your department getting cut,” he said.

Gaucherin, who chose classics after bouncing back and forth between majors, speaks highly of the welcoming atmosphere from the department and its professors.

“We are fortunate to have very smart classics professors,” he said. “I feel like that’s even a weak adjective to describe them. They’re innovative.”

Even though the department is small, the importance of classics relates directly to the modern world, Gaucherin said.

“You have sort of the earliest condensed human societies that are here,” he said. “You’re looking at the foundations of Western society.”

A schedule of a UVM student from 1835, shows that students were required to take numerous courses that would fall within the classics category, such as studying Homer’s “Odyssey,” Greek lyric poetry, moral philosophy, Greek drama and Greek politicians.

In reference to these past requirements, Franklin said that offering classics was a way for state universities to rival the Ivy Leagues by expanding the ability to learn about classics from the elite to ordinary people.

Falls agreed with Franklin and said classics is a major that is essential for the University to have.

“I know that the classics department has declined in their faculty under my watch, at my hand, but I don’t want to confuse that with a lack of admiration and appreciation for my colleagues,” he said.

For the future of the classics department, Falls said that he wants to continue to work with the department on how they will continue to offer courses at UVM.

“[The classics department] is central to what we do and how we can deal with this current sort of context that we find ourselves in, where students are not studying the humanities in depth,” he said.

Only time will tell what happens to the classics department, but with the passion from the professors  matched with the goal of Falls to work to offer courses in classics, it doesn’t look bleak.