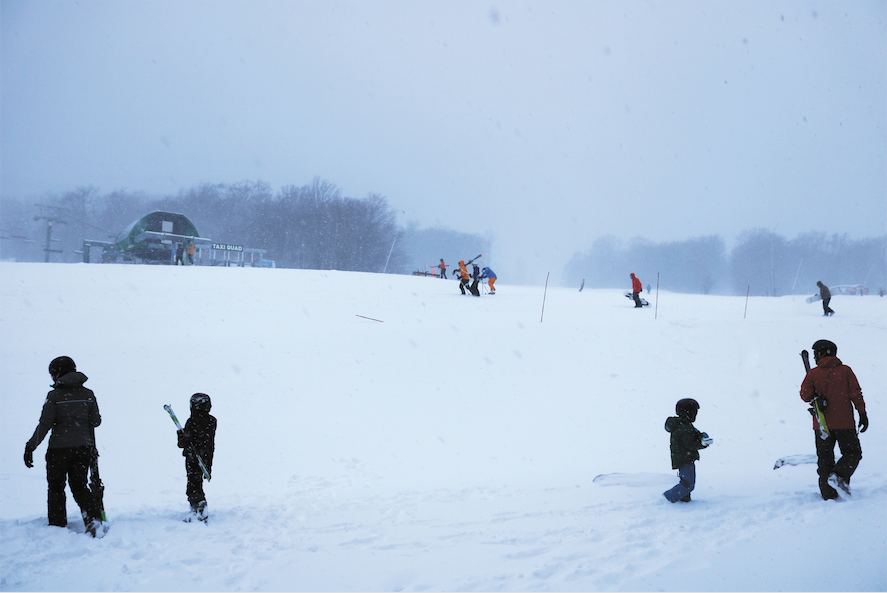 Warmer winters mean less time scraping ice off your car in the morning and fewer fears of falling on icy sidewalks while shuffling to class.

But for skiers, snowboarders and anyone who enjoys the snowy season, warmer winters threaten the very thing that keeps them outside: snow.

Warm temperatures and inconsistent snowfall jeopardize Vermont’s successful ski industry. In recent years, the state has experienced great unpredictability in its snowfall, and the decreased snow cover has propelled ski areas to innovate.

Ski resorts offset the lack of consistent snowfall and temperatures through artificial snowmaking, a system that forces water and pressurized air through “snow guns” at night when temperatures drop below freezing.

Snowmaking has become essential to keep skiers and snowboarders on the slopes. Introduced to Vermont in the 1960s, snowmaking was first used to extend the ski season, but now is the very thing that keeps the industry afloat.

“Snowmaking is an important enterprise. It keeps the economic viability of our resorts intact,” said UVM Professor and Geography Department Chair Beverley Wemple. “We can’t run the resorts and have a viable ski industry on just natural snow because our winters are so variable.”

With rapidly warming winters, snowmaking is only a short-term fix. It’s uncertain how much longer ski areas can rely on this technology because even snowmaking depends on temperatures below zero.

Climate Central, an organization researching and reporting on the changing climate, released a report in November 2017 that found Burlington to have the highest winter average warming rate in the nation, trailed by Mankato and Minneapolis, Minnesota.

According to the same Climate Central report, Burlington winters have been warming at an average rate of more than 1 degree Fahrenheit per decade.

Since 1970, the Burlington area’s average winter temperature has increased by 7 degrees Fahrenheit.

“It’s been hard, especially seeing so much snow come down, getting really excited, and within a week, having it all be gone,” said senior Maria Kissel, Ski and Snowboard Club’s ClubHaus Manager.

According to data collected in Vermont by the National Centers for Environmental Information, the average number of days with at least one inch of snow cover has been decreasing since 1963.

Out of 20 ski areas in Vermont, 18 use some degree of snowmaking.

Lyndon Outing Club, located in Vermont’s Northeast Kingdom, is one of two alpine ski areas that relies on all natural snow.

“We have been considering going to snowmaking because it would be very helpful to us,” a spokesperson for the ski area stated via Facebook message. “But at the moment we just don’t have the money to do it.”

For many mountain resorts, snowmaking has become a multimillion-dollar investment.

According to Killington’s website, the resort’s snowmaking system delivers 10 million gallons of water per day to more than 250 snow guns, which can cover 60 acres with 12 inches of fresh snow every 24 hours under ideal conditions.

The Vermont Ski Area Association reports that Stowe and Sugarbush have spent a combined $15 million in snowmaking improvements within the past five years. Stowe now boasts 83 percent snowmaking coverage, while Sugarbush maintains 70 percent across Mt. Ellen and Lincoln Peak.

“It’s not fun to ski on but it’s better than nothing,” junior Sadye Goldfarb said. “It’s frustrating because people come to Vermont as their east coast ski spot and they expect to have all this great powder, but they just get that crunchy fake snow.”

Despite the inconsistent snow conditions of the 2017-2018 winter season, the VSAA stated that 3.97 million skiers visited last winter, a slight increase from the season prior.

“The warming winters concern me because I think a big reason people often come to UVM is skiing,” Goldfarb said. “It’s really disheartening because a lot of Vermont’s tourism comes from skiing and I feel like that won’t be sustainable in the future.”

Vermont businesses generate over $1 billion in revenue from winter tourism and recreation, according to Vermont’s state website.

“Businesses that depend on tourism and recreation are starting to rethink their long-term plans, anticipating a warmer and wetter state,” the website states.

When it comes to selling season passes to UVM students, Kissel says the Ski and Snowboard Club hasn’t had any issues.

“Everyone’s kind of in the same boat when conditions are bad, people understand. They make the best of what they can,” she said.

For now, Vermonters and UVM students are taking advantage of the recent snowfall and heading out to the slopes.

If the trends of warming winters and inconsistent snowfall continue, and there’s strong evidence that they will, Vermonters need to start planning for the future.

While ski areas across the Green Mountains are making the best of advanced technologies, snowmaking is only a short-term fix to the changing climate.

Note: The 2018 U.S. temperature data and analysis from the National Oceanic and Atmospheric Administration has been delayed due to the government shutdown.

This story updated at 5:06 p.m. Jan. 22 to include the following information from Adam White, Ski Vermont director of communications:

Vermont has seen an average seasonal accumulation of 198 inches of snow over the past 10 years, a number that has actually been exceeded in four of the five most recent seasons (and will again this season). This has resulted in remarkably consistent seasons for Vermont’s ski areas:

This consistency is a determinant factor in Vermont’s total skier visits remaining strong and remarkably steady at a 10-year average of 4,126,521. These statistics do not tell a story of inconsistency, unpredictability or jeopardy.